The logo for the Chase Linx brand.

Arriva Midlands is a division of Arriva. It operates bus services around the Midlands area of England and is made up of various previous bus operators.

Formerly part of Midland Red and latterly Midland Red North until being rebranded as Arriva in late 1997. This part of the business operates from depots at Oswestry, Shrewsbury, Bridgnorth, Wellington, Burton, Cannock, Stafford and Tamworth. A garage at Shifnal closed in January 2009 whilst Bridgnorth reopened to commence operations on 5 January 2009. Swadlincote Garage closed on 24 December 2007. All operations have now moved to Burton Depot.

Services cover Shropshire, Staffordshire around parts of the West Midlands county, most notably Walsall and Wolverhampton although several services stretch as far west as over the Welsh border into Powys and Wrexham and far south as Birmingham. 2008 saw Worcestershire reached after successfully gaining a Shropshire County Council tender for route 297 from Bridgnorth to Kidderminster.

In 2007, a new Town Linx brand was introduced to services in South Derbyshire and East Staffordshire, similar to the schemes in Leicester.

On 25 February 2007 Chase Coaches Limited sold out to Arriva Midlands.[1] Its operations were merged into Cannock from 28 April 2007.

In late 2007 a new ChaseLinx brand (similar to the Leicester Linx brand below) was introduced, reflecting the purchase of Chase Coaches.

April 2008 saw the first of a new fleet of 10 Scania OmniLinks delivered for the Tamworth to Birmingham service. A number of Volvo B9TL/Wright Eclipse Gemini are also due.

The logo for the Town Linx brand.

14 February 2009 saw the company hold a final 'enthusiast' running day for the last three Dennis Falcons (3084/8/9 - K214/8/9 UHA) allocated to the Wellington depot to coincide with the planned withdrawal of this rare type in the fleet. Despite this, the Falcons continued in service at Wellington until Monday 16 February 2009 and were withdrawn at the end of service that day. However 3088 K218 UHA was briefly reallocated to Oswestry to act as a spare bus for a short period but was withdrawn on 13 March 2009 and thus ending the operation of this rare type in the fleet.

The operations of Staffordshire independent Wardle Transport were acquired by Arriva in December 2010 with 64 vehicles. Wardle will retain its identity.[2]. Further expansion in August 2011 saw the Staffordshire operations of D&G Bus been purchased and merged into the Wardle fleet. [3]

Formerly Derby City Transport this part of the business originates from the Derby Corporation buses pre-deregulation. An extensive service operates within Derby although numerous services stretch beyond the city boundaries, mainly operating from the rebuilt Derby bus station.

Arriva Derby inherited a fleet of Mercedes-Benz minibuses, Volvo Citybuses, Leyland Fleetlines and some Scania single deckers, of which have now all been either scrapped or sold on.

In early 2008, an order was announced for 59 new buses to completely update the ageing fleet. 3 Scania Omnilinks and 15 Scania Omnicities arrived for the Chaddesden and Oakwood routes (20/22/24/26) by the end of October 2008. 8 Optare Solos SRs arrived at the same time, these were used on routes 28/29 to Mackworth.

Early 2009 saw the introduction of 17 brand new Volvo / Wright Gemini double deckers. These are now used on route 44/45 to Alvaston and the 38 to Sinfin. A further 11 variation of Scania Omnicities arrived for the Chellaston services (60/61) some of which venture to Melbourne and Swadlincote (South Derbyshire). These have more seats fitted towards the front, for the less mobile, and removed fittings after complaints from pressure groups on the disability access and ergonomics of the new buses for wheelchair users. The final buses to arrive were 10 more Optare Solo SRs, which have made the front line service fleet entirely low floor, by replacing the last of the step entrance Darts. These also have a minor variation of seating fitted.

Older vehicles left in the fleet include Alexander bodied Dennis Darts (routes 37, 40/41) and Plaxton Mini Pointer Darts (spares), of which have been refurbished into the new Arriva inter-urban livery and interior moquette. The last Derby Fleetline (Fleet Number; 301, Registration; GTO 301V) retired late in 2008 from school services and has now been preserved, this Fleetline did a final tour of Derby in June 2009.

In 2011, new routes to the Royal Derby hospital was created, (33A & 36A), to rival Trent Bartons's 'Royal Derby' and Mickleover route.

The logo that was used for the Leicester Linx brand. 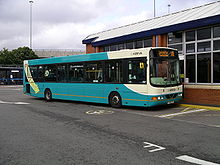 This was the part of Arriva responsible for operations throughout Leicestershire with a network largely based on the county town, Leicester. This part of the business was formerly part of Midland Red and latterly traded as Midland Red (East) Ltd and Midland Fox. Services stretch from Nottingham in the north to Coventry in the south.

In May 2006 Arriva launched Operation Overdrive in Leicestershire, with a new Leicester Linx brand. "Local Linx" was used for the more local routes, while "City Linx" was used for town-to-town express services. The Leicester Linx brand is being phased out although it is still evident on some buses. At present some of the East Lancs Myllenium Lowlander's are being refurbished and repainted into the standard arriva livery.