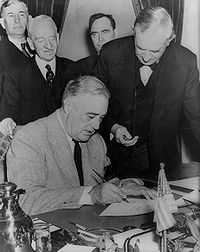 A declaration of war is a formal act by which one nation goes to war against another. The declaration is a performative speech act (or the signing of a document) by an authorized party of a national government in order to create a state of war between two or more states.

The legality of who is competent to declare war varies between nations and forms of government. In many nations, power is given to the head of state or sovereign; in other cases, something short of a full declaration of war, such as a letter of marque or a covert operation, may authorise war-like acts by privateers or mercenaries. The official international protocol for declaring war was defined in the Hague Convention (III) of 1907 on the Opening of Hostilities.

It has been noted that "developments in international law since 1945, notably the United Nations Charter, including its prohibition on the threat or use of force in international relations, may well have made the declaration of war redundant as a formal international legal instrument."[1] In addition to this, non-state or terrorist organisations may claim to or be described as "declaring war" when engaging in violent acts.[2][3] These declarations may have no legal standing in themselves, but may still act as a call to arms for supporters of these organisations.

Degree of existence of the war

Degree of justification of the war

Degree of ceremony with which the speech act was made

Degree of perfection with which the speech act was made 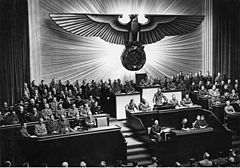 Adolf Hitler announcing a German declaration of war on the United States on 11 December 1941.

The practice of declaring war has a long history. The ancient Sumerian Epic of Gilgamesh gives an account of it,[6] as does the Old Testament.[7][8]

However, the practice of declaring war was not always strictly followed. In his study Hostilities without Declaration of War (1883), the British scholar John Frederick Maurice showed that between 1700–1870, in only 10 cases war was declared, while in other 107 cases, war was waged without such declaration (this figures only include wars waged in Europe and between European states and the United States, not including colonial wars in Africa and Asia).

The League of Nations formed in 1919 in the wake of the First World War, and the General Treaty for the Renunciation of War of 1928 signed in Paris, France, demonstrated that world powers were seriously seeking a means to prevent the carnage of another world war. Nevertheless, these powers were unable to stop the outbreak of the Second World War and, the United Nations (UN) was consequently established following that war in a renewed attempt to prevent international aggression through declarations of war.

In an effort to force nations to resolve issues without warfare, framers of the United Nations Charter attempted to commit member nations to using warfare only under limited circumstances, particularly for defensive purposes.

The UN became a war combatant itself after North Korea invaded South Korea on June 25, 1950 (see Korean War). The UN Security Council condemned the North Korean action by a 9-0 resolution (with the Soviet Union absent) and called upon its member nations to come to the aid of South Korea. The United States and 15 other nations formed a "UN force" to pursue this action. In a press conference on June 29, 1950, U.S. President Harry S. Truman characterized these hostilities as not being a "war", but a "police action".[9]

The United Nations has issued Security Council Resolutions that declared some wars to be legal actions under international law, most notably Resolution 678, authorizing war with Iraq in 1991. The UN Resolutions authorise the use of "force" or "all means necessary".[10]

Denigration of formal declarations of war

In Classical times, Thucydides condemned the Thebans, allies of Sparta, for launching a surprise attack without a declaration of war against Plataea, Athens' ally - an event which touched off the Peloponnesian War.[11]

The utility of formal declarations of war has always been questioned, either as sentimental remnants of a long gone age of chivalry or as imprudent warnings to the enemy. For example, writing in 1737, Cornelius van Bynkershoek judged that "nations and princes endowed with some pride are not generally willing to wage war without a previous declaration, for they wish by an open attack to render victory more honourable and glorious."[12] Writing in 1880, William Edward Hall judged that "any sort of previous declaration therefore is an empty formality unless the enemy must be given time and opportunity to put himself in a state of defence, and it is needless to say that no one asserts such a quixotism to be obligatory."[13]

In the United States, Congress, which makes the rules for the military, has the power under the constitution to "declare war". However neither the U.S. Constitution nor the law stipulate what format a declaration of war must take. War declarations have the force of law and are intended to be executed by the President as "commander in chief" of the armed forces. The last time Congress passed joint resolutions saying that a "state of war" existed was on June 5, 1942, when the U.S. declared war on Bulgaria, Hungary and Rumania.[14] Since then, the U.S. has used the term "authorization to use military force" as in the case against Iraq in 2003.

Sometimes decisions for military engagements were made by US presidents, without formal approval by Congress, based on UN Security Council resolutions that do not expressly declare the UN or its members to be at war. Part of the justification for the United States invasion of Panama was to capture Manuel Noriega (as a prisoner of war)[15] because he was declared a criminal rather than a belligerent.[citation needed]

Agreed Procedure for the Opening of Hostilities

The Hague Convention (III) in 1907 called "CONVENTION RELATIVE TO THE OPENING OF HOSTILITIES"[16] gives the international actions a country should perform when opening hostilities. The first two Articles say:-

The Contracting Powers recognize that hostilities between themselves must not commence without previous and explicit warning, in the form either of a reasoned declaration of war or of an ultimatum with conditional declaration of war.[17]

The existence of a state of war must be notified to the neutral Powers without delay, and shall not take effect in regard to them until after the receipt of a notification, which may, however, be given by telegraph. Neutral Powers, nevertheless, cannot rely on the absence of notification if it is clearly established that they were in fact aware of the existence of a state of war.[18]