National and Kapodistrian University of Athens

National and Kapodistrian University of Athens

The National and Kapodistrian University of Athens (Greek: Εθνικόν και Καποδιστριακόν Πανεπιστήμιον Αθηνών), usually referred to simply as the University of Athens, is the oldest university in Southeast Europe[citation needed] and has been in continuous operation since its establishment in 1837. Today, it is the second-largest institution of higher learning in Greece, with more than fifty thousand undergraduate students. It is one of the top ranking universities in Greece, and ranked 177th in the world according to the Times Higher Education-QS World University Rankings 2009.[5] 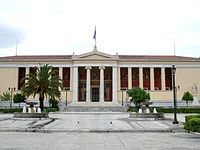 The Propylaea, part of the “Trilogy” of Theofil Hansen, serves as the ceremony hall and rectory.

The National and Kapodistrian University of Athens was founded on May 3, 1837, and was housed in the residence of architects Stamatis Kleanthes and Eduard Schaubert, on the north east slopes of the Acropolis. It was the first University not only in the newly established Greek State but in all the Balkans and the Eastern Mediterranean in general.

Before it was renamed to honour Ioannis Kapodistrias, the first head of state of independent modern Greece, the university was known as the Othonian University after King Otto and consisted of four faculties; theology, law, medicine and arts (which included applied sciences and mathematics). It had 33 professors, 52 students and 75 non-matriculated “auditors”. In November 1841, classes began in a new building designed by the Danish architect Christian Hansen. The Propylaea (37°58′51″N 23°44′02″E﻿ / ﻿37.98083°N 23.73389°E﻿ / 37.98083; 23.73389) was designed by Hansen younger brother, Theophil Hansen in 1859 but the building project was not completed until 1885[6].

In this first and “heroic” period for Greek education, the university faculty made great efforts to fill the gap between their newly founded institution and older ones in other countries.

Between 1895 and 1911, an average of one thousand new students entered the faculties each year, a figure which rose to two thousand at the end of World War I. This led to the decision to introduce entrance examinations for all the faculties, beginning in the academic year 1927-28. Since 1954 the number of students admitted each year has been fixed by the Ministry of Education and Religion, on the proposal of the faculties.

In the 1960s construction work began on the University Campus in the suburb of Ilissia. The Ilissia campus now houses the Schools of Philosophy, Theology and Sciences. [1]

The University of Athens is divided into schools, faculties and departments as follows. The naming is nοt consistent in English for historical reasons, but in Greek the largest divisions are generally named “σχολές” (schools) and are divided in “τμήματα” (faculties), furthermore subdivided in “τομείς” (departments). [7]

The Faculty of Law. The building was initially built around 1930. A second branch has been added in the 1960s. Extensive renovation started in 2002 and was completed by 2006.[8]

University campus at the Ilissia campus

The Physics department building at the Ilissia campus.

The main campus is at Ilissia (Zografou). There the faculties of Science, Theology and Philosophy are situated. The faculty of Life Sciences is located at Goudi and the faculty of Physical Education and Sports Science is located at Daphne. The faculties of Media, Education, Economics, Law and Public Administration are housed in various buildings at the centre of Athens, along with various administration facilities. University administration was initially housed in a historical neoclassical building at the center of Athens, Panepistimiou avenue, but was relocated at the main university campus later.

Research in the University of Athens covers almost all research interests. Research in the University of Athens is intimately linked with that conducted in the hospitals and research institutes of the metropolitan area, including the National Research Center for Physical Sciences Demokritos, the National Research Foundation (EIE), the National Observatory of Athens, the Hellenic Pasteur Institute, the Alexander Fleming Biomedical Sciences Research Center, the Athens High Performance Computing Laboratory, the National Centre for Marine Research (NCMR) and the Foundation for Biomedical Research of the Academy of Athens (BRFAA). Research conducted in the institutes of the metropolitan area of Athens accounted for over 50% of the ISI-indexed scientific publications coming from Greece in 2004.