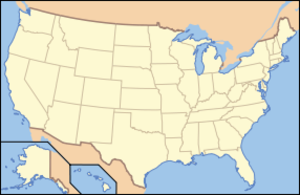 Lava Beds National Monument, located in Siskiyou and Modoc Counties, , is the site of the largest concentration of s in . It was established as a on , .

The monument lies on the northeast flank of the , the largest (total area covered) in the . The region in and around the monument is unique because it lies on the junction of the Sierra-Klamath, Cascade, and Great Basin physiographic provinces. In addition, the monument is geologically outstanding because of its great variety of "textbook" volcanic formations; i.e., caves, s, cinder cones, spatter cones, s, and s. Over 30 separate lava flows located in the park range in age from 2,000,000 years BP to 1,110 years BP. Some of the major Lava Flows within Lava Beds National Monument include:
, , , , and .
is an example of a cinder cone.

The high elevation, semi-arid desert environment of Lava Beds receives an average of 15 inches (381 mm) of annual precipitation. The climate is characterized by warm, dry summers and cold winters. The average annual high temperature is 60 °F (16 °C) and average annual low temperature is 35 °F (2 °C). Temperature extremes range from 18 °F (−28 °C) to 102 °F (39 °C). Average annual snowfall is 44 inches (112 cm). The lava tube collapse systems and lava outcrops support a great diversity of plant life, from an impressive variety of s and es to plants such as desert sweet () and the aromatic desert (purple) sage (). An impressive variety of species are present in cave entrances including the spreading wood fern () and the western swordfern (). These species are well outside of their normal range 90 - 125 miles away on the northern coastline.

During the of 1872-1873, the Indians used these tortuous lava flows to their advantage. Under the leadership of Captain Jack, the Modocs took refuge in "," a natural lava fortress. From this base a group of 53 fighting men and their families held off US Army forces numbering up to ten times their strength for five months.
was killed here by Captain Jack at a peace meeting on , .

Despite harsh, conditions, native wildlife has adapted to the environmental constraints present in the region. There are no terrestrial resources in Lava Beds National Monument. Some s obtain water from s, while others fly about twenty miles (12 km) north to . Federal and state animal species of special concern in the monument include: ("Accipiter cooperii"), ("Myotis thysanodes"), ("Myotis evotic"), ("Myotis volans"), ("Antrozous pallidus"), ("Lasionycteris noctivigans"), ("Corynorhinus townsendii"), ("Myotis ciliolabrum"), and ("Taxidea taxus").

Roughly ninety percent of the in the monument is ic. There are primarily two kinds of basaltic lava flows: and . Pahoehoe is smooth and ropy and is the type most common in Lava Beds. Aa is formed when pahoehoe cools and loses some of its es. Aa is rough, sharp, and jagged; an excellent example is the Devils Homestead lava flow, which originated at Fleener Chimneys. Most of the rest of the lava in the monument is andesitic. , a type of rhyolitic lava, also is found covering the monument; this rained down around 900 years ago during the eruption of Glass Mountain.

The flows from Mammoth and Modoc Craters comprise about 2/3 of the lava in the monument. These flows have been dated to about 30,000-40,000 years ago; most of the caves in the monument were formed from these flows. As the hot basaltic lava flowed downhill, the top cooled and crusted over, insulating the rest of the lava and forming s. s on the ceiling of a lava tube were left as the level of lava in the tube retreated and the viscous lava on the ceiling dripped as it cooled. Dripstone was created when lava splashed on the inside walls of the tubes.

Cinder cones are formed when is under great pressure. It is released in a fountain of lava, blown into the air from a central vent. The lava cools as it falls, forming cinders that pile up around the vent. When the pressure has been relieved, the rest of the lava flows from the base of the cone. Cinder cones typically only erupt once.

The cinder cones of Hippo Butte, Three Sisters, Juniper Butte, and Crescent Butte are all older than the Mammoth and Modoc Crater flows (that is, more than 30,000-40,000 years old). Eagle Nest Butte and Bearpaw Butte are 114,000 years old. Schonchin Butte and the andesitic flow from its base were formed around 62,000 years ago. The flow that formed Valentine Cave erupted 10,850 years ago. An eruption that formed The Castles is younger than the Mammoth Crater flows. Even younger were eruptions from Fleener Chimneys (the Devils Homestead flow, 10,500 years ago) and Black Crater (3,025 years ago). About 1,110 years ago, plus or minus 60 years, the Callahan flow was produced by an eruption from Cinder Butte. Though Cinder Butte is just outside the boundary of the monument, the Callahan flow is in Lava Beds and is the youngest flow in the monument.

Spatter cones are built out of thicker lava. The lava is thrown out of the vent and builds, layer by layer, a chimney surrounding the vent. Fleener Chimneys and Black Crater are examples of spatter cones.

Gillem Bluff, a fault scarp, was created as the region stretched and a block of earth dropped down along this fault (see ). The layer on top of Gillem Bluff is 2,000,000 years old, inferring the rock layers beneath are even older. The oldest lava flow from the Medicine Lake Volcano within the monument is the Basalt of Hovey Point, near Captain Jacks Stronghold, which is 450,000 years old. Petroglyph Point was created about 275,000 years ago when cinders erupted through the shallow water of Tule Lake; violent explosions of ash and steam formed layers upon layers of tuff.

A series of small s in late 1988 has been attributed to subsidence in the .

N-NE trending ground cracks, as well as N-NE trending vent series show relationships between tectonism and volcanism. One very prevalent ground crack exists along the northeastern boundary of the monument- "The Big Crack."

The leaching of s from pumice gravel, s, and overlying rock provides for deposition of secondary speleothems in lava tubes.