Sheetrit was born in Ksar es Souk (now Er Rachidia), Morocco. His family immigrated to Israel in 1957. He earned a BA and an MA in Public Policy from Bar-Ilan University.

Member of the Likud

Sheetrit began his political career in 1974 as mayor of the city of Yavne, a position he held until 1987. 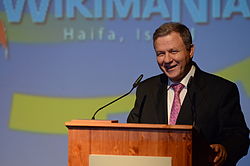 In 2005 he left Likud and joined Ariel Sharon's new Kadima party. He was re-elected in 2006 and appointed Minister of Housing and Construction, a post he held until July 2007, when he was appointed Minister of Internal Affairs. Between 23 August and 29 November 2006, he also served as Acting Justice Minister following Haim Ramon's resignation on 18 August over an indecent assault indictment. Sheetrit was replaced in the Justice portfolio by Tzipi Livni, who also continued to serve as Foreign Minister.

Following Ehud Olmert's resignation as party leader, Sheetrit ran for the party chairmanship. However, he came third out of the four candidates in the election, receiving only 8.5% of the vote.[1] Placed seventh on the party's list, he retained his seat in the 2009 elections

In early 2011, he and another MK sprayed air freshener in the Knesset, complaining about the "stench of bad politics". Both MKs were escorted out and speaker Reuven Rivlin condemned the actions.[2]

As head of the Knesset Science and Technology Committee, he spoke at the international Wikimania conference held in Haifa in 2011.[3]