Denali National Park and Preserve is located in Interior Alaska and contains Denali (Mount McKinley), the highest mountain in North America. The park and preserve together cover 9,492 mi² (24,585 km²).The longest glacier is the Kalhiltna glacier.

The word "Denali" means "the high one" in the native Athabaskan language and refers to the mountain itself. The mountain was named after president William McKinley of Ohio in 1897 by local prospector William A. Dickey, although McKinley had no connection with the region. The name is only used by those outside of Alaska. Charles Alexander Sheldon took an interest in the Dall sheep native to the region, and became concerned that human encroachment might threaten the species. After his 1907-1908 visit, he petitioned the people of Alaska and Congress to create a preserve for the sheep. (His account of the visit was published posthumously as The Wilderness of Denali, ISBN 1-56833-152-5). The park was established as Mount McKinley National Park on February 26, 1917. However, only a portion of Mount McKinley (not even including the summit) was within the original park boundary. The park was designated an international biosphere reserve in 1976. A separate Denali National Monument was proclaimed by Jimmy Carter on December 1, 1978.

Denali as seen from the park road 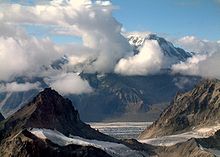 Mount McKinley National Park, whose name had been subject to local criticism from the onset, and Denali National Monument were incorporated and established into Denali National Park and Preserve by the Alaska National Interest Lands Conservation Act, December 2, 1980. At this time the Alaska Board of Geographic Names changed the name of the mountain back to "Denali," even though the U.S. Board of Geographic Names maintains "McKinley". Alaskans tend to use "Denali" and rely on context to distinguish between the park and the mountain. The size of the national park is over 6 million acres (24,500 km²), of which 4,724,735.16 acres (19,120 km²) are federally owned. The national preserve is 1,334,200 acres (543 km²), of which 1,304,132 acres (5,278 km²) are federally owned. On December 2, 1980, a 2,146,580 acre (8,687 km²) Denali Wilderness was established within the park.

Denali habitat is a mix of forest at the lowest elevations, including deciduous taiga. The preserve is also home to tundra at middle elevations, and glaciers, rock, and snow at the highest elevations. Today, the park hosts more than 400,000 visitors who enjoy wildlife viewing, mountaineering, and backpacking. Wintertime recreation includes dog-sledding, cross-country skiing, and snowmobiling where allowed. 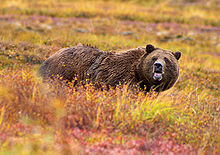 Denali is home to a variety of Alaskan birds and mammals, including a healthy population of grizzly bears and black bears. Herds of caribou roam throughout the park. Dall sheep are often seen on mountainsides, and moose feed on the aquatic plants of the small lakes and swamps. Despite human impact on the area, Denali accommodates gray wolf dens, both historic and active. Smaller animals, such as hoary marmots, arctic ground squirrels, beavers, pikas, and snowshoe hares are seen in abundance. Foxes, martens, lynx, wolverines also inhabit the park, but are more rarely seen due to their elusive natures.

The park is also well known for its bird population. Many migratory species reside in the park during late spring and summer. Birdwatchers may find waxwings, Arctic Warblers, pine grosbeaks, and wheatears, as well as Ptarmigan and the majestic tundra swan. Predatory birds include a variety of hawks, owls, and the gyrfalcon, as well as the abundant but striking golden eagle.

Ten species of fish, including trout, salmon, and arctic grayling share the waters of the park. Because many of the rivers and lakes of Denali are fed by glaciers, glacial silt and cold temperatures slow the metabolism of the fish, preventing them from reaching normal sizes. A single amphibious species, the wood frog, also lives among the lakes of the park.

Denali park rangers maintain a constant effort to keep the wildlife wild by limiting the interaction between humans and park animals. However, the number of wild bears necessitates their wearing collars to track movements. Feeding animals is strictly forbidden, as it may cause adverse affects on the feeding habits of the creature. Visitors are encouraged to view animals from safe distances. Despite the large concentration of bears in the park, efforts by rangers to educate backpackers and visitors about preventative measures and BRFCs have greatly reduced the number of dangerous encounters. Certain areas of the park are often closed due to uncommon wildlife activity, such as denning areas of wolves and bears or recent kill sites. These restricted areas may change throughout the year. Through the collective care of park staff and visitors, Denali has become a premier destination for wildlife viewing. 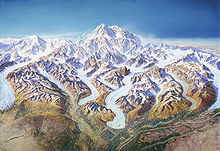 Painting of the heavily glaciated southern part of Denali, by Heinrich Berann 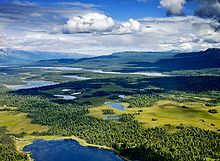 Alpine forest and lakes in Denali by Carol M. Highsmith

The Alaska Range, a mountainous expanse running through the entire park, provides interesting ecosystems in Denali. Because the fall line lies as low as 2,500 feet (760 m), wooded areas are rare inside the park, except in the flatter western sections surrounding Wonder Lake, most of the park is vast expanses of tundra. and lowlands of the park where flowing waters melt the frozen ground. Spruces and willows make up the majority of these treed areas. Because of mineral content, ground temperature, and a general lack of soil, areas surrounding the bases of mountains are not suitable for sufficient tree growth, and most trees and shrubs do not reach full size.

Having a range of elevations, there is a variety of vegetation zones. From lowest to highest, there is low brush bog, bottomland spruce-poplar forest, upland spruce-hardwood forest, moist tundra, and finally the highest of elevations, alpine tundra.

Throughout Denali's history, there has been a patchwork pattern of different plants relying on fire. Because of this, the fire history is too complicated to explain. North of the Alaskan Range, fires are common, occurring when old forests need replacement.

Tundra is the predominate ground cover of the park. Layers of topsoil collect on rotten, fragmented rock moved by thousands of years of glacial activity. Mosses, ferns, grasses, and fungi quickly fill the topsoil, and in areas of muskeg "wet tundra," tussocks form and may collect algae. The term muskeg includes very spongy waterlogged tussocks as well as deep pools of water covered by solid looking moss. Wild blueberries and soap berries thrive in this landscape, and provide the bears of Denali with the main part of their diets.

Over 450 species of flowering plants fill the park, and can be viewed in bloom throughout summer. Images of goldenrod, fireweed, lupine, bluebell, and gentian filling the valleys of Denali are often used on postcards and in artwork.

Long winters are followed by short growing seasons. Eighty percent of the bird population returns after cold months, raising their young. Most mammals and other wildlife in the park spend the brief summer months preparing for winter and raising their young.

Summers are usually cool and damp, but temperatures in the 70s are not rare. The weather is so unpredictable that there have even been instances of snow in August.

The north and south side of the Alaskan Range have a completely different climate. The Gulf of Alaska carries moisture to the south side, but the mountains block water to the north side. This brings a drier climate and huge temperature fluctuations to the north. The south receives transitional maritime continental climates, with moister, cooler summers and warmer winters. 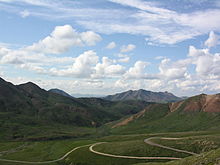 The park is serviced by a 91-mile (146 km) road from the George Parks Highway to the mining camp of Kantishna. It runs east to west, north of and roughly parallel to the imposing Alaska Range. Only a small fraction of the road is paved because permafrost and the freeze-thaw cycle create an enormous cost for maintaining the road. Only the first 15 miles (24 km) of the road are available to private vehicles, and beyond this point visitors must access the interior of the park through concessionary buses. Wonder Lake can be reached by a six-hour bus ride from the Wilderness Access Center. Eielson Visitor Center is located four hours into the park on the road.

Several fully narrated tours of the park are available, the most popular of which is the Tundra Wilderness Tour. The tours travel from the initial boreal forests through tundra to the Toklat River or Kantishna. A clear view of the mountain is only possible about 20% of the time during the summer, although it is visible more often during the winter. Several portions of the road run alongside sheer cliffs that drop hundreds of feet at the edges, and there are no guardrails. As a result of the danger involved, and because most of the gravel road is only one lane wide, drivers are trained extensively in procedures for navigating the sharp mountain curves, and yielding the right-of-way to opposing buses and park vehicles.

While the main park road goes straight through the middle of the Denali National Park Wilderness, the national preserve and portions of the park not designated wilderness are even more inaccessible. There are no roads extending out to the preserve areas, which are on the far west end of the park. The far north of the park, characterized by hills and rivers, is accessed by the Stampede Trail, a dirt road which stops at the park boundary. The very rugged south portion of the park, characterized by enormous glacier-filled canyons, is accessed by Petersville Road, a dirt road that stops about 5 miles (8.0 km) outside of the park. The mountains can be accessed most easily by air taxis that land on the glaciers.

The Denali Wilderness is a wilderness area in the Denali National Park and Preserve. It encompasses the high heart of the Alaska Range, including Denali, the centerpiece of the wilderness, which comprises about one-third of the national park.

Denali Wilderness covers the area formerly known as Mount McKinley National Park from 1917 until the park was expanded and renamed in 1980. It is 2,146,580 acres (8,687 km²) in area; the entire park is larger than the state of Massachusetts.[1]

An immense collection of cultural sites gives more and more clues as to what and who used to live there. Thousand of years ago, grassland was abundant, and mammoths utilized the flat Mammoth Steppe to move and graze. Around 11,000 to 13,500 years ago, these grasslands shrunk and woody shrubs began to appear. Back then, the North-Alaskan Range was predominantly ice free.

187 cultural sites tell about Denali's past, eighty-four have prehistoric items. Native Americans have lived in this environment for 11,000 years, using every resource the wild provided. The Koyukon, Dena'ina, Athna, Kolchan, Tanana, and Athabaskans are particularly known.

Panoramic view of the Polychrome Mountains

Denali is emerging as a site of interesting fossils, including footprints (ichnites) that were credited with being the first evidence of prehistoric wading birds, probing in mudflats for food during the Late Cretaceous Period, when they were first publicly reported in May 2006. A footprint of a carnivorous theropod had previously been reported in the park. 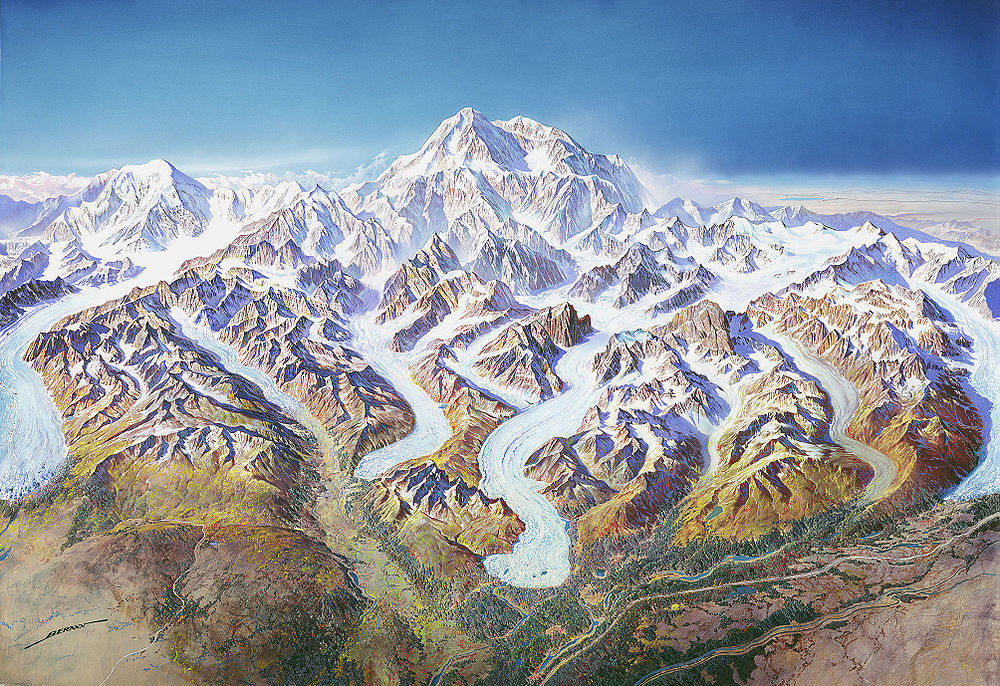 Painting of the heavily glaciated southern part of Denali, looking north-northwest. Mount Foraker is at the left, and Mt. McKinley, purposely drawn on an exaggerated scale, is featured in the center. Mouse over the painting, and click on an area of interest.