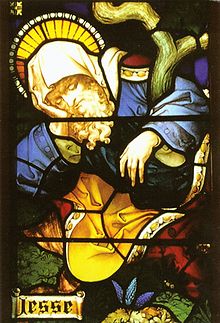 Detail of Jesse from the Stained Glass window of All Saints Church, Hove, Sussex, England.

Jesse was the son of Obed and the grandson of Ruth and of Boaz. He lived in Bethlehem, in Judah, and was of the Tribe of Judah, he was a farmer, breeder and owner of sheep. He was a prominent resident of the town of Bethlehem.[1] Jesse is important in Judaism because he was the father of the most famous king of Israel. He is important in Christianity, in part because he is in the Old Testament and mentioned in the genealogy of Jesus.

Jesse is stated to having eight sons, including David the youngest. Among his grandchildren were the three sons of Zeruiah, Abishai, Joab and Ashashel. One day the prophet Samuel came to Bethlehem sent by God, to anoint the next king of Israel. Ostensibly, his visit to Bethlehem was to offer a sacrifice to God. He used that excuse because he was afraid that Saul might kill him if he suspected the true reason for his arrival in Bethlehem. Samuel offered a sacrifice with Jesse and then went to his house, where he sanctified him and his family. The prophet asked Jesse to present his sons, after seeing them, he realized that God has not chosen any of them. Then he said to Jesse if he had any other sons, Jesse told him that David the youngest was tending the flock. The prophet then asked for him, waited and when he came, God asked the prophet to anoint him as king over Israel. Some time later king Saul was suffering from depression and melancholy, asked Jesse for his son to play the harp for him since he heard David plays the harp beautifully. Jesse sent his son alongside some gifts for the king, the king was taken with David's harp playing that he asked Jesse to keep him in his court to play for him whenever he was depressed. Later on Jesse sent his son with gifts to be given to his older brothers who were to fight war against the Philistines and, to the captain too. Years later when David fled to the desert away from Saul, who sought to kill David in order for him to stay in power and not have his throne be taken away from him. David, worried about the safety of his parents, went to Mizpah in Moab, to ask permission from the king to allow his father Jesse and his mother to stay under the royal protection of the king, they stayed there till Jesse's son's fortunes took a turn for the better.

The name Jesse is referenced in the Old Testament, and in particular the passages of Isaiah, Chapter 11, Verses 1-3:

These are two of the verses regarded by Christians as prophecy of the advent of Jesus, whom they consider to be the Christ and Messiah. These two prophesies are, however, or perhaps additionally, regarded by Bahá'ís to refer to Bahá'u'lláh, alleged also to have arisen from "the stump of Jesse."[4][5]

The Tree of Jesse

From the eleventh century the Tree of Jesse has been portrayed in religious illuminations, manuscripts, wall paintings, wood and stone carvings (including a grave marker), stained glass windows, floor tiles and embroidery. In the representation of the Tree, it is usual for Jesse to be portrayed recumbent with a tree rising from his body, and the ancestors of Christ portrayed in its branches with Prophets and Christ at the summit. The earliest illustrated manuscripts did not always depict Jesse or Christ. Not all illustrations include the same number of characters; this depends upon the size of the area provided, such as seven light windows or three light windows.

Unlike in the Book of Samuel, in the Book of Chronicles Jesse is said to have only seven sons including David and two daughters, Zeruiah and Abigail.

The "Geza of Jesse" is a plateau located just north of the valley of Jezreel in Israel said to have been originally cleared and settled by descendants of David.