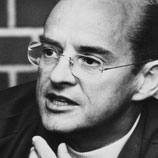 Ball was born in , and studied acting, directing, and design at the . He toured for two years as assistant designer and actor in Margaret Webster's company

Ball founded the in Pittsburgh in 1965. This was a company of up to 30 full-time paid actors who studied all disciplines of the theatre arts during the day and performed at night. Ball had a falling out with ACT's financial benefactors in Pittsburgh and took the company on the road. His 1966 productions of Albee's "", Pirandello's "", and others at the Summer Festival led a group of financiers to offer his company a home in San Francisco, which had recently lost The Actor's Workshop to New York's .

In its first season, Ball's ACT produced twenty-seven full length plays in two theatres over the course of seven months. Some actors would do one role in the early part of a play at the Geary Theatre then run two blocks up the hill to the Marines Memorial to appear in the last part of another. Ball's 1972 production of "Cyrano de Bergerac" and his 1976 production of "" were televised nationally on PBS. In 1979, ACT received the Tony Award for excellence in regional theatre.

Ball was often provocative. His interpretation of Albee's "Tiny Alice" brought threat of a lawsuit from the playwright, who tried to withhold the performance rights only to discover that they had never been granted in the first place. Some observers thought that Ball's operatic production (with an added aside condemning the Vietnam war) may have solved some problems inherent in the text.

Ball was the author of the 1984 book, "A Sense of Direction: Some Observations on the Art of Directing". He appeared in ""

Ball died in from a heart attack.