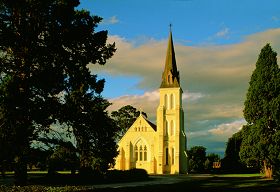 Evandale is a small town in northern , . It sits on the banks of the 18 km south of Launceston. A classified historic town, many of its buildings remain largely in original condition. It is famous for a popular Sunday market and as host to the annual World Penny Farthing bicycle Championships [cite news|title=Cyclist takes out fifth Penny Farthing championship|url=http://www.abc.net.au/news/newsitems/200702/s1856277.htm|publisher=|date=|accessdate=2007-03-12] . The population of the Evandale region is 1,057 (2001)

Originally founded as Collins Hill by Governor Lachlan Macquarie in 1811, it was also known as Morven before being named Evandale in 1929 after the surveyor and painter , who spent much of his later years in .

, the founder of , and landscape painter lived near the town with Glover memorialised in an annual art prize and a statue at Falls Park.John Kelly, father of the , reportedly worked in the township as a convict.

A Scottish , , was granted convert|500|acre|km2 of land on the South Esk River in 1816, and another 300 acres (121 ha) the next year. On this he built 'Trafalgar', the earliest surviving building in Evandale, and one of the oldest farmhouses in Australia. In 1824 he built the now-demolished homestead of 'Cambock' on the village's outskirts. Barclay continued acquiring land in the surrounding district and by 1928 was considered the largest owner of good land on the island. The names of roads like Barclay Street, Cambock Lane, and Trafalgar Lane mark his influence.

In 1876 the opened a narrow (1067 mm) gauge line from Hobart to Evandale where it connected with the broad (1600 mm) gauge from Launceston and Deloraine, built in 1871. It remained a station until the Evandale-Deloraine line was converted to narrow gauge in 1888.

Numerous statues are found in Evandale including:
* in Memorial Park (highly decorated )
* An anonymous penny-fathing rider on the corner of Russell and Scone Streets
* in Falls Park