Sagittarius is a constellation of the zodiac, the one containing the galactic center. Its name is Latin for the archer, and its symbol is

(Unicode U+2650 ♐), a stylized arrow. Sagittarius is commonly represented as a centaur drawing a bow. It lies between Ophiuchus to the west and Capricornus to the east. 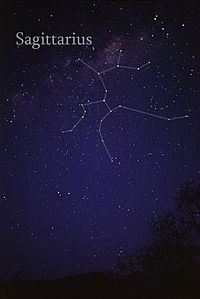 The constellation Sagittarius as it can be seen with the naked eye.

The constellation's brighter stars (from left to right on the map: τ, ζ, σ, φ, λ, ε, δ, and γ2 Sagittarii) form an easily recognizable asterism known as 'the Teapot'. The stars δ Sgr (Kaus Media), ε Sgr (Kaus Australis), ζ Sgr (Ascella), and φ Sgr form the body of the pot; λ Sgr (Kaus Borealis) is the point of the lid; γ2 Sgr (Alnasl) is the tip of the spout; and σ Sgr (Nunki) and τ Sgr the handle.[1][2]

The constellation as a whole is often depicted as having the rough appearance of a stick-figure archer drawing its bow, with the fainter stars providing its horse body. 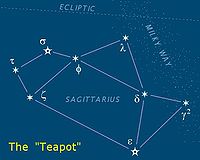 The Teapot asterism in Sagittarius.

α Sgr (Rukbat) is not the brightest star of the constellation, having a magnitude of only 3.96 (not shown on the main map as it is located below the map's southeastern corner, north is up).

With 22 stars in this constellation known to have planets, Sagittarius has more known planetary host stars than any other constellation.

The Milky Way is at its densest near Sagittarius, as this is where the galactic center lies. Consequently, Sagittarius contains many star clusters and nebulae. One of the brightest of the star clusters is Messier 55, about 7.5° west of δ Sgr. 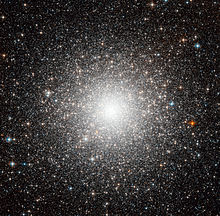 Messier 54 was the first globular cluster found that is outside the Milky Way[3].

In 1999 a violent outburst at V4641 Sgr was thought to have revealed the location of the closest known black hole to Earth,[4] but later investigation increased its estimated distance by a factor of 15.[5] The complex radio source Sagittarius A is also here. Astronomers believe that one of its components, known as Sagittarius A*, is associated with a supermassive black hole at the center of the galaxy. The Sagittarius Dwarf Elliptical Galaxy is located just outside the Milky Way.

Sagittarius as depicted in Urania's Mirror, a set of constellation cards published in London c.1825.

The Babylonians identified Sagittarius as the god Nerigal or Nergal, a strange centaur-like creature firing an arrow from a bow.[6] It is generally depicted with wings, with two heads, one panther head and one human head, as well as a scorpion's stinger raised above its more conventional horse's tail. The Sumerian name Pabilsag is composed of two elements - Pabil, meaning 'elder paternal kinsman' and Sag, meaning 'chief, head'. The name may thus be translated as the 'Forefather' or 'Chief Ancestor'.[7] The figure is reminiscent of modern depictions of Sagittarius.

In Greek mythology, Sagittarius is identified as a centaur: half human, half horse. In some legends, the Centaur Chiron was the son of Philyra and Saturn, who was said to have changed himself into a horse to escape his jealous wife, Rhea. Chiron was eventually immortalised in the constellation of Centaurus or in some version, Sagittarius.[citation needed]

The arrow of this constellation points towards the star Antares, the "heart of the scorpion."