Kota Kinabalu International Airport (KKIA) (IATA: BKI, ICAO: WBKK) serves the city of Kota Kinabalu, the state capital of Sabah, Malaysia. It is located about 8 km southwest of the city centre. It is the second busiest airport in Malaysia after Kuala Lumpur International Airport, handling 4.8 million passengers in 2009.[4][5] It is the main gateway into the state of Sabah and into Borneo. The new Terminal 1 building has 64 check-in counters for international and domestic flights; 17 aircraft parking bays capable of accommodating both the wide and narrow body aircraft and the terminal building can handle 3,200 passengers per peak hour.

The Departure Hall column head design is inspired by the ‘Wakid’ basket design. A ‘Wakid’ is a symbolic native practice in preparing for a meaningful journey. Some ethnic pattern of the Rungus and Bajau were also applied in the floor tiles pattern. The floor size at Level 1 is 24,128 sqm, Level 2 is 18,511.4 sqm and Level 3 is 22,339 sqm providing sufficient comfort space for all passengers. The new terminal has also been configured with 12 aerobridges. The terminal has a total of seven luggage x-ray machines installed. For hand luggage, there is one for VIP, three for departure and one for staff entrance while two machines are available for baggage check-in. It is also configured with a total of 36 immigration counters, 16 for departures and 20 for arrivals. There are also six baggage carousels available. Commercial activities are offered via duty free shops, retail outlets and food & beverage outlets.

The airport first began as a military airfield built by the Japanese occupying forces during World-War II.[6] It was then known as Jesselton Airfield (Kota Kinabalu was previously known as Jesselton). Towards the end of the war, it suffered severe bombings by Allied Forces until the surrender of the Japanese army in 1945.[7]

After the war, the Department of Civil Aviation (DCA) of North Borneo (now Sabah) took charge of the operations and maintenance of the airport. In 1957, the original grass strip runway was resurfaced with bitumen material and a new terminal was built.[6] By 1959, the runway was extended to 1,593 metres long to enable the operation of Malaysia Airways Viscount aircraft. In 1963, there was the reinforcement and further expansion of the runway to 1,921 meters long to cater for Comet 4 operations. Commercial flights and passenger arrivals gradually increased and a larger terminal building was needed to accommodate this increase.

In 1969 a British consultancy firm was appointed to formulate a Master Plan for a phased and organised development of KKIA from 1970 until 2000 and years beyond. The master plan was submitted to the government with the following recommendations:

Around the 1970s to 1980s, a newer terminal building was built on the other side of the runway. Almost all commercial flights were shifted to this newer and larger terminal. From then on until recently, the original terminal became known as Airport Lama ("old airport"). In 1992, the DCA of Sabah was corporatised, and Malaysia Airports Holdings Berhad took over management and operations of the airport.[6] Further expansion project began in 2006 for both terminals (see below), and in January 2007 the original terminal was rebranded Terminal 2, and the other became known as Terminal 1.

In mid 2005, the Malaysian government approved a project for major renovation and extension of KKIA worth RM1.4 billion. The project saw the 2,988 m (9,803 ft) runway extended to 3,780 m (12,402 ft) and the size of the main airport terminal building (Terminal 1) increased from 34,000 m2 (370,000 sq ft) to 87,000 m2 (940,000 sq ft). The new airport terminal building will be able to accommodate four Boeing 747s, one Airbus A330, seven Boeing 737s, three Fokker 50s and three Dorniers at any one time. It will also have 12 jetways for passenger use.[8][9] The present air traffic control tower which is attached to the main terminal building will be demolished and will be replaced by a separate, stand alone tower. The whole project including the runway extension is scheduled to be completed by mid-2009.[4] 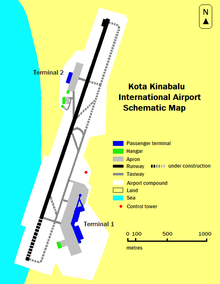 Schematic map of the airport

Terminal 1 is the main terminal of KKIA located at Kepayan area. It can be accessed via Jalan Kepayan, Jalan Lintas and Jalan Putatan. Currently, the main tel is undergoing a massive renovation and expansion. When it's completed, the terminal would be capable of handling 9 million passengers annually compare to its previous capacity which is 2.5 million passengers annually. It also features duty-free shops, other shops, lounges, travel agents, restaurants, and many others.

Terminal 1's new wing (phase 1) was completed and opened for commercial use on August 19, 2008 while the other wing (phase 2) was closed for renovation and is expected to complete by May 2010. It will also have a place for small aircraft passengers. After the whole terminal was completed, the first wing will be accommodating international flights while the second wing will be for domestic flights. After completion, Terminal 1 would be equipped with:

The first flight to depart at the new wing was MH 2637 to Kuala Lumpur at 0650 hours while the last flight at the old wing was at 0025 hours. Malaysia Airlines is the main operating airline in this terminal.[11] 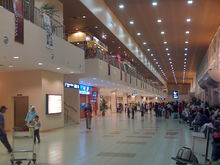 What is today Terminal 2 used to be the original terminal building of the airport when it was first built. It is accessed via Jalan Mat Salleh in Tanjung Aru and is located on the other side of the runway from Terminal 1. Terminal 2 is for charter and low cost carrier. Sometime, it is called LCCT. Terminal 2 has recently undergone a major renovation and extension and it re-opened on January 1, 2007 in conjunction with Visit Malaysia Year 2007. It was completed 27 months ahead of schedule. Although it is renovated to serve the low cost carriers, namely AirAsia, it is not a low cost carrier terminal (LCCT) as that of Kuala Lumpur International Airport's LCCT, as here, other full service airlines may utilize the terminal.[12] It has 26 check-in counters for domestic and international flights and 6 parking bays for B737 and A320 aircraft as well as 7 luggage x-ray machines, a VIP room and 13 immigration counters. The terminal has the capacity to handle 3 million passengers annually.[10] 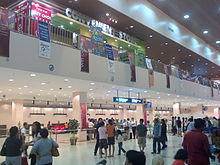 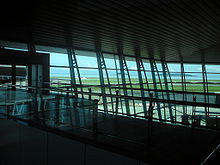 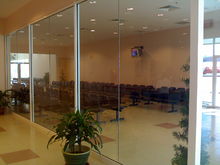 There are 19 airlines operating in KKIA (including charters and seasonals) : 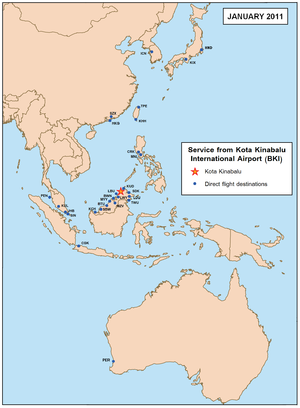 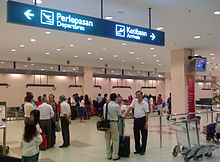