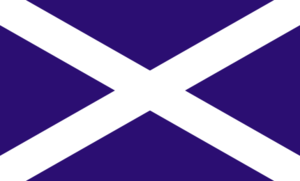 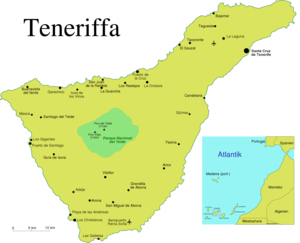 Tenerife (previously known and spelled as "Teneriffe" in English, before mass tourism adopted the Spanish spelling), a Spanish , is the largest of the seven in the off the coast of . The island's is 852,945 ( census).

The island is home to founded in .

The island is located at coord|28|19|N|16|34|W| and has a surface area of 2,034 km² (785 sq.mi). Like the rest of the Canary Islands, it is of volcanic origin. The last of the three eruptions that created the island happened about 3.5M years ago, although small murmurs occur. The most recent earthquake of about 4 on the Richter scale was in . The highest point of Spain, Mount (3,717 m), is on this island. The island itself is clearly divided into a very dry southern part and a very humid and green north.

The island is part of the province of Santa Cruz de Tenerife. It includes 31 municipalities:

Tourism is the most prominent industry in the Canaries, and it is one of the major tourist destinations in the World.

In , 9,276,963 tourists (excluding those from other parts of ) came to the Canary Islands. Tenerife had 3,442,787 arrivals that year, excluding the numbers for Spanish tourists which make up an additional 30% of total arrivals. According to last year's Canarian Statistics Centre's (ISTAC) Report on Tourism the greatest number of tourists from any one country come from the , with more than 1,600,000 tourists in 2005. In second place comes followed by , , , , , , , , , and .

Tourism is more prevalent in the of the island, which is hotter and drier and has many well developed resorts such as and . More recently coastal development has spread northwards from Playa de las Americas and now encompasses the former small enclave of La Caleta. After the "Moratoria" act passed by the Canarian Parliament in , no more hotels should be built on the island unless they are classified as 5 star-quality and comprise different services such as Courses or Congress facilities. This act was passed with the goal of improving the standard of tourism service and promoting environmentally conscious development.

The area known as Costa Adeje (Las Américas-Los Cristianos) has many world-class facilities and leisure opportunities besides sea and sand, such as quality shopping centres, golf courses, restaurants, waterparks, animal parks, and a theatre suitable for musicals or a Congress Hall.

In the more lush and green north of the island the main development for tourism has been in the town of . The town itself has kept some of its old-harbour town charm mixed with northern European influences. Still, the tourist boom in the 60's changed the outlook of the town, making it cosy and cosmopolitan at the same time, and a favourite for the more mature traveller (notably the German and Spanish tourist).

The island of Tenerife is served by (TFN) and (TFS).

Rodeos Airport (north), the smaller of the two, is located near the metropolitan area Santa Cruz-La Laguna (423.022 people). It serves inter-insular flights as well as national and European flights, and for the last two years, a weekly service to Venezuela. Reina Sofía Airport (south) is the busiest Airport in Tenerife, ranking 7th in Spain. It typically serves the mass of regular and charter flights constantly arriving from most of Europe.

As it is an island, the only other way to arrive on Tenerife is by ferry, either to Santa Cruz de Tenerife or Los Cristianos, near Playa de Las Américas.

A network consisting of two fast, toll-free motorways (TF1 and TF5) encircles nearly the entire island, linking all the main towns and resorts with the metropolitan area. The exception is in the west from Adeje to Icod de los Vinos, which is traversed by a smaller winding mountain road. However, plans are now afoot to complete the motorway, which is causing heavy debate between the environmentalists and the local businessmen, though works are to start in early 2007. This, however, pales in comparison to the heated discussions concerning the planned port in Granadilla, which is now in the hands of Brussels.

Away from the major motorways, there is a network of secondary and communal roads, varying from wide to steep, winding narrow roads, mainly unlit and often with drops either side of the main carriageway surface.

Public transport on the island is provided by an extensive network of buses and run by , who operate a fleet of modern, air-conditioned buses ["Tenerife's main bus service, TITSA, is efficient and covers the island well. Most of the vehicles are new, air conditioned, clean and painted white and green." Barrett, Pam (2000) "Insight Guide Tenerife and Western Canary Islands" (4th ed.) Insight Guides, APA Publications, Singapore, p. 280, ISBN 1-58573-060-2] which, generally, run on time. Plans for a light-rail network linking the capital with the South have been approved by both the Tenerife Council and the Canary Islands Government, for Grand Canary and Tenerife, though the discussion with the central Spanish Government hinges now on budget. [ [http://www.cabtfe.es/areasgc/presidencia/corporacion/presidente/apuestatransporte.html Navarro, Ricardo Melchior (23 October 2005) "Apuesta por el transporte público" "El Dia"] ("Odds for Public Transportation")]

A hire car is sometimes the best option for discovering the remote wilderness regions. Reputable companies include [http://www.autoreisen.es Autoreisen] and [http://www.orcarcanarias.com ORCAR] . TITSA buses cover most of the island and the buses are fairly frequent. A BONO travel card is a good idea if you intend to spend some time travelling on the buses as they can save 50-70% on journey costs. Only one card is needed by any number in a group and can be bought at bus stations as well as some tobacconists.

The metropolitan Area formed by Santa Cruz and La Laguna will be served by the "" (Tenerife Tram) working in early 2007, after 3 years of intensive works.

Juba labelled Tenerife as "Nivaria" (from the "nix", "nivis", "snow"), a reference to the snows atop the volcano known as . [Charles Knight, "The English Cyclopaedia", 1866, Bradbury, Evans] Tenerife bears a name that is also a reference to this volcano, and was used for the island by the of the neighboring island of , “Tene” signifying “mountain” and “ife” white (the “r” was added by the Spanish). To the natives of Tenerife, the island was known as "Chenech", "Chinech" or "Achinech". As the legend goes, many islands, among them Tenerife, were the uppermost peaks of Atlantis, a continent that sank under the ocean in a catastrophic event which left only the highest mountains above sea level.

It is also believed that nearly 3 million years ago the island known today as Tenerife was three separate islands with three mountain ranges: the Anaga, Teno and Valle San Lorenzo. Then, as the consequence of a remarkable volcanic process, they melted together forming the island of Tenerife. [http://www.nidolanguagetravel.com/destinations/tenerife/history-tenerife.aspx] .

Tenerife at the time of its conquest was composed of nine distinct "menceyatos", as the small kingdoms of the were known. Though the Spanish forces under the "" ("military governor") , suffered a crushing defeat at the hands of the in the in , the , eventually overcome by superior technology and diseases to which they were not immune, surrendered to the Crown of Castile on , .

As on the other islands of the same group, much of the native population of Tenerife was enslaved or succumbed to diseases at the same time as immigrants from various places in Europe associated with the Spanish Empire (, , , ) settled on the island. Native pine forests on the island were cleared to make way for the cultivation of in the 1520s; in succeeding centuries, the island’s economy was centered around the cultivation of other commodities such as wine and for making dyes, as well as bananas.

The , led by British Captain , stopped at Tenerife on June 3, 1787 for fresh water, vegetables and meat. It would then continue on to , where it would create the first European settlement in on , .

The island was attacked in by the British. On , attacked , the capital town of Tenerife and headquarters of the Captain General. After a fierce engagement, the British were repelled; Nelson lost his right arm as he tried to disembark at the shore. On , another attempted landing in the region of Puerto Santiago was fended off by the inhabitants of the Valley of Santiago, who hurled stones at the British from the heights of the cliffs of Los Gigantes.Less hostile visitors arrived at the island in succeeding centuries. The naturalist ascended the peak of Mount and remarked on the beauty of the island. Tourists began visiting Tenerife in large numbers in the 1890s, especially the northern towns of Puerto de la Cruz and Santa Cruz de Tenerife.

Before his rise to power, was posted to Tenerife in March by a Republican government wary of his influence and political leanings. However, Franco received information and in Grand Canary agreed to collaborate in the military coup that would result in the ; the Canaries fell to the Nationalists in July and its population was subject to the mass executions of opponents to the new regime. In the 1950s, the misery of the post-war years caused thousands of the island’s inhabitants to emigrate to and other parts of .