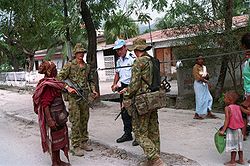 The International Force for East Timor (INTERFET) was a multinational peacekeeping taskforce, mandated by the United Nations to address the humanitarian and security crisis which took place in East Timor from 1999–2000 until the arrival of United Nations peacekeepers. INTERFET was commanded by an Australian, Major General Peter Cosgrove. 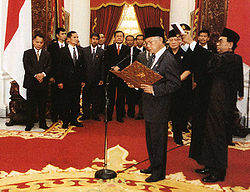 Indonesian President BJ Habibie takes the presidential oath of office on 21 May 1998.

Indonesia invaded East Timor in 1975 and annexed the former Portuguese colony. The annexation was recognised by few nations and was resisted by East Timorese. Foreign powers placed high importance on good relations with Indonesia and were largely reluctant to assist a push for independence. Following the fall of long-serving Indonesian President Suharto the new President, B. J. Habibie, was prepared to grant special autonomy for East Timor.[1] Portugal had started to gain some political allies firstly in the EU, and after that in other places of the world to pressure Indonesia.[citation needed]

In late 1998, the Australian Prime Minister John Howard with his Foreign Minister Alexander Downer drafted a letter setting out a major change in Australian policy. The letter supported the idea of autonomy but went much further by suggesting that the East Timores be given a chance to vote on independence within a decade. The letter upset Habibie, who saw it as implying Indonesia was a "colonial power" and he decided in response to announce a snap referendum to be conducted within six months.[1]

News of the proposal provoked a violent reaction in East Timor from pro-Indonesian militia. The Indonesian army did not intervene to restore order. At a summit in Bali John Howard told Habibie that a United Nations Peace Keeping force should oversee the process. Habibie rejected the proposal, believing it would have insulted the Indonesian military.[2] 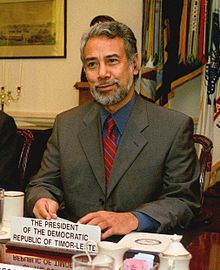 Xanana Gusmão, one of the leaders of East Timor's independence movement (pictured in 2002).

The United Nations Mission in East Timor (UNAMET) was established to organize and conduct a referendum on the question of independence. It was composed of police and observers rather than military personnel. The UN-sponsored referendum held on 30 August 1999 showed overwhelming approval for East Timorese independence from Indonesia. After the result was announced on 4 September, violent clashes, instigated by a suspected anti-independence militia, sparked a humanitarian and security crisis in the region, with Xanana Gusmão calling for a UN peacekeeping force the same day.[3] Many East Timorese were killed, with as many as 500,000 displaced and around half fleeing the territory.[4]

The violence was met with widespread public anger in Australia, Portugal and elsewhere and activists in Portugal, Australia, the United States and other nations pressured their governments to take action. Australia's Opposition Spokesman on Foreign Affairs, Laurie Brereton, was vocal in highlighting evidence of the Indonesian military's involvement in pro-integrationist violence and advocated United Nations peacekeeping to support the East Timor's ballot. The Catholic Church in Australia urged the Australian Government to send an armed peacekeeping force to East Timor to end the violence.[5] Street protesters harried the Indonesian Embassy.

Indonesia, in dire economic straits relented. Under international pressure to allow an international peacekeeping force, Indonesian president BJ Habibie announced on 12 September that he would do so.[6] He told a press conference:[2]

On 15 September 1999, the United Nations Security Council expressed concern at the deteriorating situation in East Timor, and issued UNSC Resolution 1264 calling for a multinational force to restore peace and security to East Timor, to protect and support the United Nations mission there, and to facilitate humanitarian assistance operations until such time as a United Nations peacekeeping force could be approved and deployed in the area.[7] 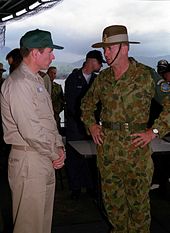 The International Forces East Timor (INTERFET) coalition began deploying to East Timor on 20 September 1999, as a non-UN force operating in accordance with UN Resolutions. Led by Australia, who contributed 5,500 personnel and the force commander, Major General Peter Cosgrove, it was tasked with restoring peace and security, protecting and supporting UNAMET, and facilitating humanitarian assistance.[4] It was led by a vanguard of nine warships, including Portuguese NRP Vasco da Gama, British HMS Glasgow and American USS Belleau Wood, USS Mobile Bay, and later the USS Peleliu.

The lead up to the operation remained politically and militarily tense. Australia re-deployed frontline combat aircraft; F/A-18s and F-111s, northward to act as a deterrent against escalation of the conflict by the Indonesian military. An Indonesian submarine was detected by Coalition surveillance within the vicinity of Dili Harbour as INTERFET forces approached. While the intervention was ultimately successful, Australian-Indonesian relations would take several years to recover.[2]

Most UNAMET (United Nations Mission in East Timor) personnel, as well as Indonesian military, police and administrators had already been evacuated from the region in the preceding months by the Royal Australian Air Force and other allied air forces, including the Royal New Zealand Air Force.

With the withdrawal of the Indonesian forces and officials, UNAMET re-established its headquarters in Dili on 28 September and on 19 October 1999, Indonesia formally recognised the result of the independence referendum. Soon after, the United Nations Transitional Administration in East Timor (UNTAET) was established as a peacekeeping operation which was also fully responsible for the administration of East Timor to oversee its transition to independence.[4]

The arrival of thousands of international troops in East Timor caused the militia to flee across the border into Indonesia. Sporadic cross-border raids by the militia against INTERFET forces, particularly in the southern border held by the New Zealand Army, led to suspicion that the militia had the tacit support of the Indonesian military. Such suspicion increased following a major contact at Aidabasalala, 15 kilometres (9.3 mi) from the West Timor border, on 16 October 1999. The action, involving an Australian covert reconnaissance patrol from the Special Air Service Regiment saw the Australians repeatedly attacked in a series of fire-fights by a group of more than 20 militia. The SASR patrol had been detected whilst establishing an observation post and were forced to fight their way to a landing zone, being attacked a further three times over a one-and-a-half hour period, killing a number of their attackers before they were successfully extracted by Black Hawk helicopter. Five militia were killed and three wounded, whilst there were no Australian casualties.[8] Later, intelligence reports speculated on the involvement of Indonesian military personnel in the attempt to cut off and destroy the Australians, whilst conjecture as to the identity of the pro-Indonesian militias and the source of their arms and training increased in the media.[9]

A New Zealand soldier, Private Leonard Manning, was shot dead in East Timor, on 24 July 2000, becoming the first combat fatality since the United Nations-backed forces had arrived in September.[10] Private Manning was killed in the North-East town of Suai when his patrol found itself in a confrontation with a militia.[11] Two Australian soldiers also died in East Timor in 2000—Corporal Stuart Jones by accidental discharge of a weapon and Lance Corporal Russell Eisenhuth, through illness.[4]