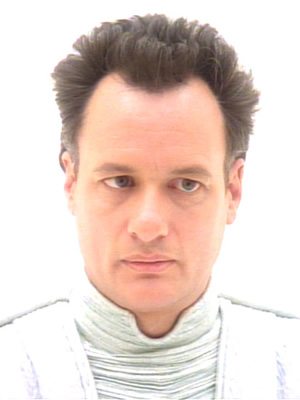 Caption = Q in the guise of "" in "Tapestry"
Size = 250px
Species = Q
Gender = none (male as chosen form of appearance)
Planet = N/A; originates from the
Portrayed =
Powers = Omnipotence Q, played by , is a character in the mythology who appears in ', ' and "". The name "Q" is also shared by other members of the . chose the letter "Q" for the character and species in honor of his friend, Janet Quarton. [ [http://www.bbc.co.uk/cult/st/tng/q.shtml BBC Online] ]

Beginning with the pilot episode of "", Q became a popular recurring character, in large part because of the comedic and dramatic chemistry between de Lancie and as Captain .

The character Q is a mischievous, seemingly being who has taken an interest in humans. Q's power is limited only in that he can not overcome others in the , the peer group to which he belongs. Otherwise, he can do more or less whatever he wants, which most commonly leads to him annoying others (with or without intent).

Q also has a flair for drama, with a personality that switches between a joking, camp style and a more ominous and even dangerous manner. While he is boastful, condescending, and threatening, he arguably has humans' best interests at heart, as seen in the series finale, "", in which he causes Jean-Luc Picard to shift through chronological periods, giving him a chance to save humanity. In his portrayal of Q, John de Lancie used 's famous description of as "Mad, bad and dangerous to know." as his inspiration ["Star Trek: The Next Generation" DVD, disc 7, extras]

Q first appears as a villain, putting Picard and the Enterprise crew on trial for venturing beyond human ability and threatening humans with annihilation. In later episodes, he becomes more of a . Q evolved into a sympathetic and at times even pitiful character. In "", Q is punished by the Q Continuum by being made mortal; his commission of an uncharacteristically selfless act garners the return of his powers. In the same episode, Q says that Picard is "the closest thing in this universe that I have to a friend." Toward the end of "The Next Generation", Q is less antagonistic toward Picard, even, in "Tapestry", apparently saving Picard and helping the captain better understand himself. In the series finale, "All Good Things...", Q gives Picard a "helping hand" in saving humanity.

Picard often thinks of Q as an annoyance, and Q often is surprised by Picard and the other humans he encounters. In "Q Who?", when Picard argues that humans are capable of dealing with anything, Q whisks the U.S.S. "Enterprise" to the system J-25 for the first human encounter with the Borg. Picard resorts to asking for Q to save the ship. Surprised, Q brings the "Enterprise" home and tells Picard that most men would rather have died than ask for help. It is debated whether Q's interference brought the Federation to the Borg's attention, or whether Q provided assistance by exposing Picard to the Borg, which gave the Federation some early warning. Events later shown in the prequel "", suggest the Borg were already on the way when Q introduced them and Picard to each other; thus Q in fact aided mankind on this occasion. In Q's later appearances on "Star Trek: Voyager" and "Star Trek: Deep Space Nine", he is less concerned with humans and becomes more of a character. In the "DS9" episode "", Q at one point goads Commander into a match, all the while belittling and insulting him. When Sisko loses his temper and knocks Q down, an astonished Q says, "You hit me! Picard never hit me!" Sisko counters frankly that "I'm "not" Picard." Q responds with a smile, saying "No...you're "much" easier to provoke." Q enjoys goading humans, , and others to display their savage side, and, if they refuse, he dismisses them as no fun. This seems to be just a game for Q, however, and when characters show genuine compassion or restraint, he will usually admit to being impressed that their "tiny human minds" were capable of such action. Later, during the series run of "Voyager," Q starts a war among members of the Continuum in a campaign for individual freedom. As the war goes badly for his side, Q comes to the conclusion that the production, or birth, of a new member of the continuum could revitalize the Q. Q first seeks Captain Janeway to be the mother of his child but she refuses and eventually Q reproduces with a female Q he had previously been involved with. Their progeny is born entirely conscious and with all the power of any other Q, although still lacking adult maturity. Q's son (played by Keegan de Lancie who is John de Lancies actual son) causes no end of trouble for the Continuum and Q turns to Captain Janeway for help. Eventually they agree that the boy will remain on "Voyager", without his powers, and either learn how to be a responsible, productive inhabitant of the cosmos, or spend eternity as an .

Eventually the young Q comes round, but the Continuum is not entirely convinced, so in negotiation with Q, they come to an agreement. Q must eternally guard, observe, and accompany the boy to ensure his proper behavior.