The North London Line is a railway line which passes through the inner suburbs of north London, England. Its route is a rough semicircle from the south west to the north east, avoiding central London. The line is owned and maintained by Network Rail. Although much of it originated as part of the North London Railway, the current route is the result of a series of amalgamations, closures and re-openings; and has a mixed third-rail and overhead electrical power supply. It is an important freight route and is used by the Richmond to Stratford service of the London Overground, as part of the National Rail network.[1] Also between Richmond and Gunnersbury, London Underground's District line shares tracks with London Overground services, although this part is also owned and maintained by Network Rail.

The line closed in February 2010 between Gospel Oak and Stratford for installing a new signalling system and for extending 30 platforms, ultimately to allow four-car trains to run on the London Overground network. The line reopened on 1 June 2010 with a reduced service and none on Sundays,[2] and with the upgrade work completed the full seven-day service resumed with effect from 22 May 2011.

The North London Line between Richmond and North Woolwich derives from five connecting sections which were opened over 25 years from 1846:

The line between Broad Street and both Kew Bridge and Richmond was electrified by the LNWR in 1916 on the 4th rail DC system.

In 1944 passenger service on the NLR Poplar branch ceased. Freight traffic probably continued on the branch until the docks on the Isle of Dogs closed during the 1960s and 1980s. The trackbed of the southern part of the branch, from Poplar to Bow, was used for the Docklands Light Railway (DLR) branch to Stratford.

In 1979 the North Woolwich to Stratford service was extended to Camden Road as the CrossTown LinkLine service using the same Cravens-built diesel multiple unit trains. There were no intermediate stations until in 1980 Hackney Wick, near the site of the former Victoria Park station, opened and Hackney Central re-opened, Homerton re-opened in 1985 (both those stations had closed in 1944). New platforms were built at West Ham for interchange with the adjacent Underground station.

In the 1980s Broad Street station closed and the Tottenham Hale–Stratford link and the station at Lea Bridge ceased to be used by regular passenger trains. The line between Dalston and North Woolwich was electrified on the third-rail system and Broad Street services were diverted to North Woolwich using former Southern Region 2-EPB types built in the 1950s. The two-car trains soon proved too small and were replaced by three-car Class 313 electric multiple units. The new service was branded by British Rail as the North London Link, and some signs using this name still exist.

In December 2006, as with the Poplar branch (see above), the line between Stratford and North Woolwich was permanently closed to make a way for a future DLR extension from Canning Town to Stratford International (opening February 2011). The section south of Canning Town was not used by the DLR as it is largely duplicated by the DLR King George V branch. Instead, the section will become part of Crossrail's branch to Abbey Wood (opening 2018). The section south of Stratford had always been the Cinderella end of the line, when there were operating problems it was common for trains to be turned short at Stratford.

Poor performance before the TFL take over

Despite published performance figures[3] the North London Line used to be regarded by frequent travellers as offering a poor service,[4] with extremely congested trains and an unreliable service[5] with trains often cancelled shortly before they are due to arrive. A 2006 London Assembly report described the current service as "shabby, unreliable, unsafe and overcrowded", proposing the transfer of the service to Transport for London (TfL) as a solution to improve the quality of the service[6] due to upgrade plans[7] which coincide with the extension of the East London line. A report on the line can be found on the London Assembly website.[8]

The North London Line, as part of Silverlink Metro, along with the West London Line, Gospel Oak to Barking Line and the Watford DC Line, was transferred to Transport for London (TfL) in 2007 to form its new London Overground service. TfL began to remodel stations, integrate lines and following the transfer and extension of the East London Line, aims to create an orbital rail service. TfL also brought in new trains and the line, which previously appeared on tube maps following a public campaign, gained its own colour. TfL extensively refurbished and upgraded the line.

In addition to the primary Broad Street - Richmond service there were services that linked Broad Street with Harrow & Wealdstone and Watford Junction on the West Coast Main Line. Most of these were routed via the line between South Hampstead and Camden Road, calling at Primrose Hill, although some travelled via Hampstead Heath and switched to the Watford line at Willesden Junction. By the time that Broad Street closed in 1986 the Watford services operated only in the rush hours, and they were diverted to Liverpool Street by way of a new link in Hackney, known as the Graham Road Curve. However, with trains frequently cancelled, and some timed to arrive at Liverpool Street station after the start of the working day (plus the evening workings also being timed to not be suitable for office workers), patronage was very low and after a few years they were withdrawn.

In 2000, Anglia Railways started a service between Basingstoke and Ipswich, utilising parts of the North London Line. The service was called London Crosslink and ran up to five times a day at roughly two-hourly intervals. The service called only at principal stations such as Staines, Feltham and Brentford. On the North London Line, the trains called only at Stratford, Highbury & Islington, Camden Road (some services), West Hampstead and Willesden Junction. The service was withdrawn in 2002.

Most of the line runs in a curve across north London. Only Richmond and Kew Gardens stations at the western end are south of the River Thames. The river crossing is made by Kew Railway Bridge on tracks which are shared with the London Underground District Line. The location of the eastern extremity has varied over the years. Between 1944 and 1986 it was at Broad Street station, then it switched to North Woolwich. It was cut back to Stratford. A tunnel, the Hampstead Heath tunnel, runs under Hampstead between Finchley Road & Frognal and Hampstead Heath. The line is double track throughout with a mix of triple and quadruple track between Camden Road and Dalston Kingsland. The former North Woolwich branch included a section of single track between Custom House and North Woolwich stations, and the Broad Street branch was at one time formed of quadruple track.

During the February–May 2010 closure, stations at Caledonian Road & Barnsbury, Highbury & Islington and Canonbury were extensively rebuilt. The through route was moved to the north side of the cutting, to allow the extended East London Line to serve Highbury & Islington and Canonbury on a pair of completely segregated tracks occupying the former route on the south side of the cutting. West of Highbury and Islington, the passenger line switches to the inner pair of tracks, while the outer pair are for freight train use, all tracks under overhead wires. Once the extension is complete, there will therefore be four tracks between Dalston (Western) Junction and shortly east of Camden Road.

The line is electrified using the third rail system from Richmond to Acton Central. Overhead lines are used from Acton Central to Stratford. The line to Broad Street used third rail supply and when the through service to North Woolwich started in 1985 trains used the third rail throughout. When the trains were replaced a few years later by dual-system Class 313 trains it became possible to use the overhead electrification system which had been added to parts of the line for the benefit of freight trains. There had been some unexpected difficulties with earth currents from the third rail system which this overcame. This usage was steadily extended and trains had to make a number of changes between electrification systems during their short journey. These were at Dalston Kingsland, Camden Road and Acton Central. With the final upgrade of the line between Camden Road and Stratford, the need to change electification systems on this stretch was eliminated, and now the only changeover takes place at Acton Central.

The line crosses or comes into contact with a very large number of railway lines, especially lines radiating from central London. This does provide opportunities to move between separate sectors of suburban London without having to enter the central zone.

Interchanges shown on the tube map 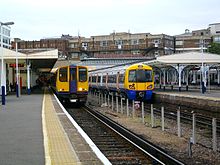 Old vs new: a Class 313 and its replacement, a Class 378 Capitalstar at Richmond

From March 2011, the extended East London Line connects to the NLL with ELL services joining the line west of Dalston Kingsland, running to Highbury & Islington.,[10][11] 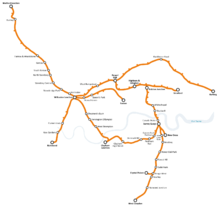 Map of the London Overground network, with the NLL connected to other lines

Maiden Lane station may be reopened by Camden Council[12] however the Office of Rail Regulation has not included this in the current plans.[13]

Hounslow council proposed that part of the North London Line be used as a branch of Crossrail to Hounslow.[14] This would see Crossrail services stopping at Acton Central and South Acton. However it was not included in the initial Crossrail bill, but could potentially form part of a later extension.

Under the former government's plans for High Speed 2 line from London Euston to Birmingham; a new station called Old Oak Common would be built by 2025 serving the North London Line, West London Line, High Speed 2 and Crossrail. The new government does support this after opposing it at first.[15]

Another new station at North Acton is proposed for interchange with the Central Line. As this may require the central line station being moved to the east, it is merely an aspiration.

Silverlink Metro 313117 at North Woolwich on 9 December 2006, the final day of service at that station

Closed stations apart from those on the closed sections of the line are:

On 1 November 1865 the NLR opened its City Extension mostly on a viaduct from a triangular junction at Dalston to Broad Street in the City with these stations:

The extension closed on 30 June 1986, but although the track was lifted the viaduct remained in place. In 2010, the route was re-opened as part of the extended East London Line, which, like the North London Line, is operated by London Overground.

DLR and Jubilee Line services are not affected at the first three of those stations.

The DLR line to Stratford International will use the former NLL low level platforms at Stratford. NLL trains now terminate at new platforms on the north side of the high level station.