Cyperus rotundus (coco-grass, purple nut sedge, red nut sedge) is a species of sedge (Cyperaceae) native to Africa, southern and central Europe (north to France and Austria), and southern Asia. The word cyperus derives from the Greek "κύπερος" (kuperos)[1] and rotundus is from Latin, meaning "round".[2] The earliest attested form of the word cyperus is the Mycenaean Greek ku-pa-ro, written in Linear B syllabic script.[3]

A cross section through the flower stem

Cyperus rotundus is a perennial plant, that may reach a height of up to 40 cm. The names "nut grass" and "nut sedge" (shared with the related species Cyperus esculentus) are derived from its tubers, that somewhat resemble nuts, although botanically they have nothing to do with nuts.

As in other Cyperaceae, the leaves sprout in ranks of three from the base of the plant. The flower stems have a triangular cross-section. The flower is bisexual and has three stamina and a three-stigma carpel. The fruit is a three-angled achene.

The root system of a young plant initially forms white, fleshy rhizomes. Some rhizomes grow upward in the soil, then form a bulb-like structure from which new shoots and roots grow, and from the new roots, new rhizomes grow. Other rhizomes grow horizontally or downward, and form dark reddish-brown tubers or chains of tubers. 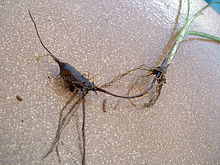 Cyperus rotundus is one of the most invasive weeds known, having spread out to a worldwide distribution in tropical and temperate regions. It has been called "the world's worst weed"[4] as it is known as a weed in over 90 countries, and infests over 50 crops worldwide.[citation needed] In the United States it occurs from Florida north to New York and Minnesota and west to California and most of the states in between.

Its existence in a field significantly reduces crop yield, both because it is a tough competitor for ground resources, and because it is allelopathic, the roots releasing substances harmful to other plants. Similarly, it also has a bad effect on ornamental gardening. The difficulty to control it is a result of its intensive system of underground tubers, and its resistance to most herbicides. It is also one of the few weeds that cannot be stopped with plastic mulch.[citation needed]

Weed pulling in gardens usually results in breakage of roots, leaving tubers in the ground from which new plants emerge quickly. Ploughing distributes the tubers in the field, worsening the infestation; even if the plough cuts up the tubers to pieces, new plants can still grow from them. In addition, the tubers can survive harsh conditions, further contributing to the difficulty to eradicate the plant.

Most herbicides may kill the plant's leaves, but most have no effect on the root system and the tubers. Glyphosphate will kill some of the tubers (along with most other plants) and repeated application can be successful. Halosulfuron, brand name "Manage" (now renamed "SedgeHammer" in the USA) or "Sempra" in Australia, will control nut grass after repeated applications without damaging lawns.[citation needed] 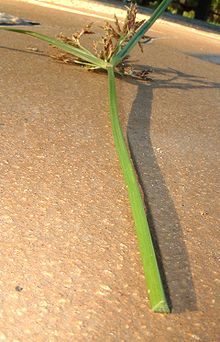 Despite its bad reputation, Cyperus rotundus has several beneficial uses.

The plant is used in popular medicine:

Modern alternative medicine recommends using the plant to treat nausea, fever and inflammation; for pain reduction; for muscle relaxation and many other disorders.

Despite the bitter taste of the tubers, they are edible and have a nutritional value. The plant is known to have been eaten in Africa in famine-stricken areas.

In addition, the tubers are an important nutritional source of minerals and trace elements for migrating birds such as cranes.