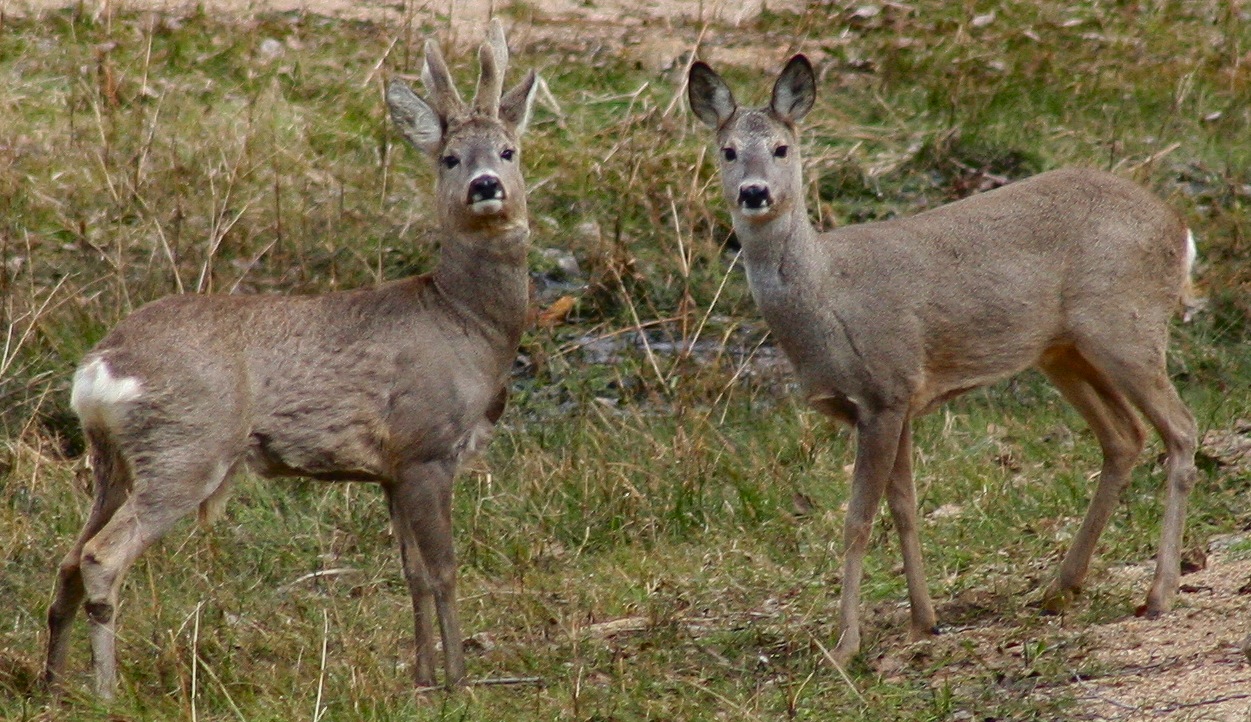 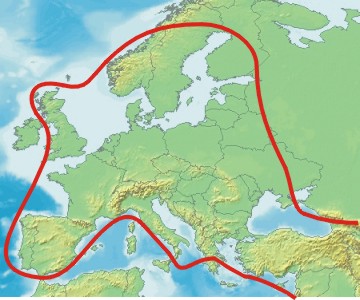 range_map_caption=Range of "Capreolus capreolus"The European Roe Deer ("Capreolus capreolus") is a species of , , and Caspian coastal regions. There is a separate species known as the ("Capreolus pygargus") that is found from the to as far east as and . The two species meet at the , with the European species occupying the southern flank of the mountain ranges and adjacent Asia Minor and the Siberian species occupying the northern flank of the mountain ranges. Within Europe, the European Roe Deer occurs in most areas, with the exception of northernmost (north of ) and some of the s, notably , , and the islands; in the Mediterranean region it is largely confined to mountainous regions, and is absent or rare at low levels.

English "roe" is from "raha", from "*raikhon", cognate to "ra", German "Reh". The word is attested in the 5th century inscription as "raïhan". Ultimately perhaps from a root "*rei-" "streaked, spotted."

The Roe Deer is a relatively small deer, with a body length of 95-135 cm (3.1 - 4.4 ft), a shoulder height of 65-75 cm (2.1 - 2.5 ft), and a weight of 15-30 kg (33-66 lb). It has rather short, erect s and a reddish body with a grey face. Its hide is golden red in summer, darkening to brown or even black in winter, with lighter undersides and a white rump patch; the tail is very short (2-3 cm, or 0.8 - 1.2 in), and barely visible. Only the males have antlers, which are lost during winter, but which re-grow in time for the mating season. The first and second set of antlers are unbranched and short (5-12 cm, or 2 - 4.7 in), while older bucks in good conditions develop antlers up to 20-25 cm (8-10 in) long with two or three, rarely even four, points. When the male's antlers begin to regrow, they are covered in a thin layer of velvet-like fur which disappears later on after the hair's blood supply is lost. Males may speed up the process by rubbing their antlers on trees, so that their antlers are hard and stiff for the duels during the mating season. Roe Deer are the only type of deer that can regrow their antlers during winter.

The Roe Deer is primarily , or primarily active during the twilight, very quick and graceful, living in woods although it may venture to grasslands and sparse forests. It feeds mainly on grass, leaves, berries and young shoots. It particularly likes very young, tender grass with a high moisture content ie. grass that has received rain the day before. Roe deer will not generally venture in to a field that either has livestock in it (ie. sheep, cattle), or has recently had it in; this is because the livestock will make the grass very unclean. A commonly associated with biotic communities at an early stage of succession, during the period in the Roe Deer was abundant, taking advantage of areas of forest or woodland cleared by Neolithic farmers (Boyle, 2006). However, sightings of Roe deer have become more common in back gardens in outer suburbs. One of the latest sightings of this kind was in a back garden in Brentwood, Essex.

The Roe Deer attains a maximum life span (in the wild) of ten years. When alarmed, it will bark a sound much like a dog and flash out its white rump patch. Rump patches differ between the sexes, with the white rump patches heart-shaped on females and kidney-shaped on males. Males may also bark, make a low grunting noise or make a high pitched wolf-like whine when attracting mates during the breeding season, often luring multiple does into their territory. The Roe Deer spends most of its life alone, preferring to live solitary except when mating during the breeding season.

The polygamous Roe Deer males clash over territory in early summer and mate in early fall. During courtship, when the males chase the females, they often flatten the underbrush leaving behind areas of the forest in the shape of a figure eight called 'roe rings'. Males may also use their antlers to shovel around fallen foliage and dirt as a way of attracting a mate. Roebucks enter rutting inappetence during the July and August breeding season. Females are monoestrous and after usually give birth the following June, after a ten-month gestation period, typically to two spotted fawns of opposite sexes. The fawns remain hidden in long grass from predators until they are ready to join the rest of the herd; they are suckled by their mother several times a day for around three months. Roe deer adults will often abandon their young if they sense or smell that an animal or human has been near it. Young female roe deer can begin to reproduce when they are around 16 months old.