Individual mother tongues in India number several hundred;[8] the 1961 census recognized 1,652[9] (SIL Ethnologue lists 415). According to Census of India of 2001, 30 languages are spoken by more than a million native speakers, 122 by more than 10,000. Three millennia of language contact has led to significant mutual influence among the four language families in India and South Asia. Two contact languages have played an important role in the history of India: Persian and English.[10] 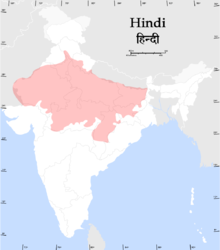 The Hindi-belt, including Hindi-related languages such as Rajasthani and Bihari.
Main article: Linguistic history of India

The northern Indian languages from the Indo-European family evolved from Old Indo-Aryan such as Sanskrit, by way of the Middle Indo-Aryan Prakrit languages and Apabhraṃśa of the Middle Ages. There is no consensus for a specific time where the modern north Indian languages such as Hindi-Urdu, Assamese, Bengali, Gujarati, Marathi, Punjabi, Rajasthani, Sindhi and Oriya emerged, but AD 1000 is commonly accepted.[11] Each language had different influences, with Hindi-Urdu (Hindustani) being strongly influenced by Persian.

Dialectologists distinguish the terms "language" and "dialect" on the basis of mutual intelligibility. The Indian census uses two specific classifications in its own unique way: (1) 'language' and (2) 'mother tongue'. The 'mother tongues' are grouped within each 'language'. Many 'mother tongues' so defined would be considered a language rather than a dialect by linguistic standards. This is especially so for many 'mother tongues' with tens of millions of speakers that is officially grouped under the 'language' Hindi.

The Indian census of 1961 recognised 1,652 different languages in India (including languages not native to the subcontinent). The 1991 census recognizes 1,576 classified "mother tongues"[20] The People of India (POI) project of Anthropological Survey of India reported 325 languages which are used for in-group communication by the Indian communities. SIL Ethnologue lists 415 living "Languages of India" (out of 6,912 worldwide).

The languages of India belong to several language families. The largest of these in terms of speakers is the Indo-European family, predominantly represented in its Indo-Aryan branch (accounting for some 700 million speakers, or 69% of the population), but also including minority languages such as Persian, Portuguese or French, and English as a lingua franca. Kashmiri and other Dardic languages, which form part of the Indo-Iranian, and arguably Indo-Aryan family, have some 4.6 million speakers in India.

The second largest language family is the Dravidian family, accounting for some 200 million speakers, or 26%. Families with smaller numbers of speakers are Austro-Asiatic and numerous small Tibeto-Burman languages, with some 10 and 6 million speakers, respectively, together 5% of the population.

The Ongan languages of the southern Andaman Islands form a fifth family; the Great Andamanese languages are extinct apart from one highly endangered language with a dwindling number of speakers. There is also a known language isolate, the Nihali language. The Shompen language or languages is/are poorly attested and unclassified. Sentinelese is entirely unknown.

Most languages in the Indian republic are written in Brahmi-derived scripts, such as Devangari, Kannada, Eastern Nagari - Assamese/Bengali, Telugu, Oriya, Tamil, etc., though Urdu is written in an Arabic script, and a few minor languages such as Santali use independent scripts.

Article 345 of the Indian constitution provides recognition to "official languages" of the union to include Standard Hindi or any one or more of the languages adopted by a state legislature as the official language. Until the Twenty-First Amendment of the Constitution in 1967, the country recognised 14 official regional languages. The Eighth Schedule and the Seventy-First Amendment provided for the inclusion of Sindhi, Konkani, Meiteilon and Nepali, thereby increasing the number of official regional languages of India to 18.[22] Individual states, whose borders are mostly drawn on socio-linguistic lines, are free to decide their own language for internal administration and education.

The following table lists the official languages, aside from English, set out in the eighth schedule as of May 2008:[23]

In 2005, Sanskrit, which already had special status in Article 351 of the Constitution of India as the primary source language for the development of the official standard of Hindi,[30] was also declared to be a classical language; this was followed by similar declarations for Kannada and Telugu in 2008, based on the recommendation of a committee of linguistic experts constituted by the Ministry of Culture, Government of India.[29]

In a 2006 press release, Minister of Tourism & Culture Ambika Soni told the Rajya Sabha the following criteria were laid down to determine the eligibility of languages to be considered for classification as a "classical Language",[31]

In British India, English was the sole language used for administrative purposes as well as for higher education purposes. When India became independent in 1947, the Indian legislators had the challenge of choosing a language for official communication as well as for communication between different linguistic regions across India. The choices available were:

The Indian constitution, in 1950, declared Hindi in Devanagari script to be the official language of the union.[32] Unless Parliament decided otherwise, the use of English for official purposes was to cease 15 years after the constitution came into effect, i.e., on 26 January 1965.[32] The prospect of the changeover, however, led to much alarm in the non Hindi-speaking areas of India, especially Dravidian-speaking states whose languages were not related to Hindi at all. As a result, Parliament enacted the Official Languages Act, 1963,[33][34][35][36][37][38] which provided for the continued use of English for official purposes along with Hindi, even after 1965.

India has hundreds of active dialects in use. Therefore, choosing any single language as an official language presents serious problems to all those whose "mother tongue" is different. However, all the boards of education across India, recognize the 'need' for training people to one common language. This results in many complaints: There are many complaints that in North India, non-Hindi speakers undergo considerable difficulties on account of language. Similarly, there are numerous complaints that all North Indians have language trouble when traveling to South India. It's common to hear of incidents that result due friction between those who strongly believe in the chosen official language, and those who follow the thought that the chosen language(s) do not take into account everyone's preferences. Of course, in a country of over a billion people, it's never going to be easy to establish such standards.

[39][dead link] Local official language commissions have been established and various steps are being taken in a direction to reduce tensions and friction.[citation needed]

There are some significant conflicts over linguistic rights in India.

The first major linguistic conflict, known as the Anti-Hindi agitations of Tamil Nadu took place in Tamil Nadu against the implementation of Hindi as the sole official language of India. Political analysts consider this as a major factor in bringing DMK to power and leading to the ousting and nearly total elimination of the Congress party in Tamil Nadu.[40] Strong cultural pride based on language is also found in other Indian states such as Kerala, Bengal, Maharashtra and in Karnataka. To express disapproval of the imposition of an alien language Hindi on its people as a result of the central government overstepping its constitutional authority, Maharashtra and Karnataka Governments made the state languages compulsory in educational institutions.[41] In 2011, V S Achuthananthan Ministry in Kerala made state language, Malayalam compulsory in all schools.

The Government of India attempts to assuage these conflicts with various campaigns, coordinated by the Central Institute of Indian Languages (CIIL), Mysore, a branch of the Department of Higher Education, Language Bureau, Ministry of Human Resource Development.

Various Indian languages have corresponding scripts for them. Marathi language is written with Devanagari. Most other languages are written using a script specific to them, such as Bengali with Bengali, Punjabi with Gurmukhi, Oriya with Utkal Lipi, Gujarati with Gujarati, etc. Urdu and sometimes Kashmiri, Saraiki and Sindhi are written in modified versions of the Perso-Arabic script. With this one exception, the scripts of Indian languages are native to India. (See ISO 15919 regarding Romanization of Indian languages)