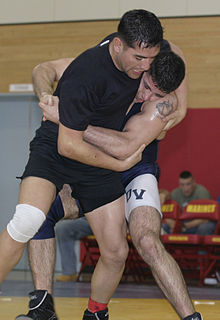 One wrestler is trying to get the back.

Clinch fighting (also referred to as clinch work) is the part of stand-up fighting where the combatants are grappling in a clinch, typically using clinch holds. Clinching the opponent can be used to eliminate the opponent's effective usage of some kicks, punches, and mêlée weapons. The clinch can also be used as a medium to switch from stand-up fighting to ground fighting by using takedowns, throws or sweeps. Clinch fighting is emphasized in Greco-Roman Wrestling, Freestyle Wrestling, Catch wrestling, Shoot wrestling, Judo, Mixed martial arts, San Shou, Muay Thai, Sambo and Sumo.

Clinch fighting is the primary focus of many combat sports such as Judo and it is also a fundamental part of Amateur Wrestling, Sambo, Muay Thai and Mixed martial arts. The nature of the clinch is fighting in each sport depends on the rules involved. Muay Thai puts much emphasis on strikes from the clinch, while Judo focuses on throws. The rule common to all these forms is the allowance for the grappling necessary to form a clinch. Others combat sports like Boxing or Taekwondo only allow clinching for a short time or do not allow it at all. If clinching is disallowed, the clinching fighter will be issued a warning, or the referee will restart the fight from a distance. 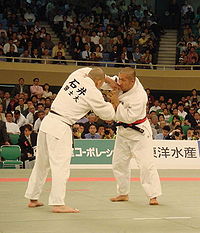 Grip fighting in the clinch and especially throwing is the primary focus in Judo.

The clinch is a powerful tool for grapplers to advance into a dominant position in ground fighting, or is used for scoring points or winning a match such as a grand amplitude throw in Amateur Wrestling or an ippon in Judo. The type of techniques employed are heavily dependent on whether or not the participants are wearing clothing heavy enough to be grabbed and used to gain leverage or unbalance them to set up throws. In competitive environments examples of such clothing would be the Judogi, Brazilian Jiu Jitsu gi or the Kurtka.

In competition where such clothing is being worn (almost exclusively referred to as a gi) there is a strong emphasis on grip fighting where the fighters will attempt to gain a dominant hold on the opponent's gi to unbalance and throw them. Examples of such competition would be Judo, Sambo or some Brazilian Jiu Jitsu competitions although in BJJ there is frequently a division for both gi and no-gi competition.

In no-gi competition getting double underhooks is generally considered advantageous, as the position can be used to perform throws or takedowns. Being behind the opponent in such a position is known as getting the back, and is generally considered even more advantageous, since it is harder for the opponent to defend from that position. A typical example of a technique that can be performed from this position is the suplex.

Delivering knee and elbow strikes in the clinch is an important part of Muay Thai training.

A multitude of striking techniques exist that can be used effectively from the clinch. Punching in the clinch, also sometimes referred to as "dirty boxing" is an important aspect of Muay Thai and mixed martial arts. Short looping punches such as hooks and uppercuts can be used effectively from the single collar tie position. Although disallowed in many combat sports, elbows and headbutts can also be effectively used from the clinch. The short distance in the clinch nullifies kicking to some extent, but some kicks are still effective. In Muay Thai the double collar tie is used to control an opponent while kneeing to the head or midsection, and stomps are used in some mixed martial arts competitions to kick the feet of the opponent. Wing Chun practitioners develop the clinch in its close-fighting method which generally involves chi sao ("sticky hands").

There are very few submission holds that can be applied effectively from the clinch, without engaging in ground fighting. The most well known submission hold is the guillotine choke, which can be attempted from a single or double collar tie. Height is advantageous in applying the guillotine choke from the clinch, since sufficient leverage is needed.