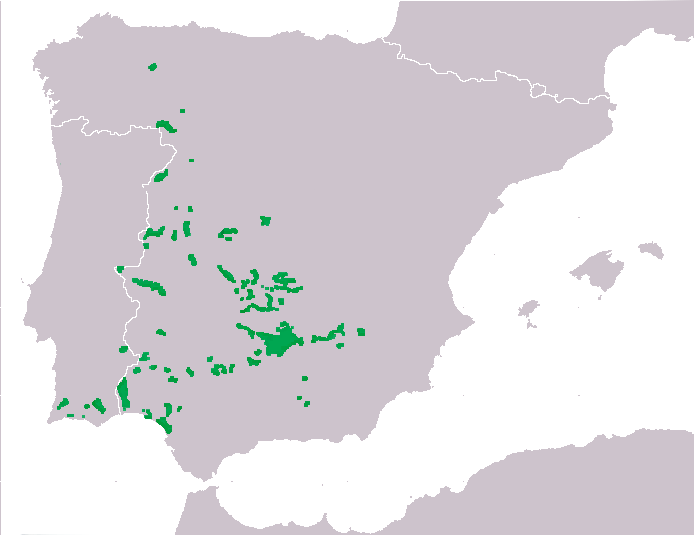 The Iberian lynx ("Lynx pardinus"), sometimes referred to as the Spanish lynx, is a mammal native to the in . The species often used to be misclassified as a subspecies of the ("Lynx lynx"), but is now considered a separate species. Both species occurred together in central Europe in the epoch, being separated by habitat choice.

While the Eurasian lynx bears rather pallid markings, the Iberian lynx has distinctive, -like spots with a coat that is often light grey or various shades of light brownish-yellow. Some western populations were spotless though these have recently become .

The Iberian lynx does not differ greatly from the Eurasian lynx but more closely resembles a . The face is more cat-like than that of Eurasian lynx. It has a short stubby bob tail with a black tip, and a tuft of black hair on the tip of the pointed ears, whiskers and sideburns.

As the population of rabbits in has declined, the Iberian lynx is often forced to attack young , , roebuck or s. The Iberian lynx competes with the , the "meloncillo" ("") and the .

It is solitary and hunts alone; it will stalk its prey or lie in wait for hours behind a bush or rock until the prey is sufficiently close to pounce in a few strides.

The tufts of hair on its ears helps it to detect sources of sound; without them, its hearing capacity is greatly reduced. The edges of its feet are covered in long thick hair, which facilitates silent movement through snow. Lynx, especially with younger animals, roam widely, with ranges reaching more than 100 km. Also it has a territory (~ 10-20 km²), depending on how much food is available.

The Iberian lynx marks its territory with its urine, droppings and scratch marks on the barks of trees.

During the mating season the female leaves her territory in search of a male. The typical period is about two months; the cubs are born between March and September, with a peak of births in March and April. A litter consists of two or three (rarely one, or four to five) kittens weighing between 200–250 grams. The kittens become independent at 7–10 months old, but remain with the mother until around 20 months old. Survival of the young depends heavily on the availability of prey species. In the wild both males and females reach sexual maturity at one year old, though in practice they rarely breed until a territory becomes vacant; one female was known not to breed until five years old when its mother died. The maximum longevity in the wild is 13 years.

This lynx was once distributed over the entire Iberian Peninsula. It is now restricted to very small areas, with breeding only confirmed in two areas of , southern Spain. The Iberian lynx prefers heterogeneous environments of open grassland mixed with dense shrubs such as Arbutus, lentisk, and ; and trees such as and . Mainly in mountainous areas covered with vegetation; maquis or "Mediterranean forest".

The Iberian lynx is a species.

The only breeding populations are in Spain, living in the and in the Sierra de , Jaén.

The Iberian lynx and its habitat are fully protected and are no longer legally hunted. Its critical status is mainly due to habitat loss, poisoning, road casualties, feral dogs and poaching. Its habitat loss is due mainly to infrastructure improvement, urban & resort development, tree monocultivation (, , ) which serves to break the lynx's distribution area. In addition, the lynx prey population of rabbits is also declining due to diseases like and hemorrhagic . [cite book | author = Mitchell-Jones, et al | title = The Atlas of European Mammals | year = 1999]

On March 29, , the birth of three cubs, the first born in captivity, was announced. [ [http://news.bbc.co.uk/1/hi/sci/tech/4394005.stm BBC NEWS | Science/Nature | Hopes raised by Spain lynx births ] ] Four more cubs were born in 2006. These recent births seem to open up the prospect of a future reintroduction of the species to parts of its former habitat where it has disappeared.