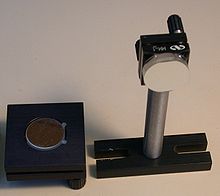 A mirror mount is a device that holds a mirror. In optics research, these can be quite sophisticated devices, due to the need to be able to tip and tilt the mirror by controlled amounts, while still holding it in a precise position when it is not being adjusted.

Precision mirror mounts can be quite expensive, and a notable amount of engineering goes into their design. Such sophisticated mounts are often required for lasers, interferometers, and optical delay lines. 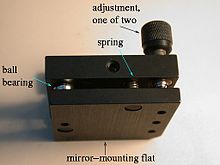 A kinematic mount, showing some of the mechanism.

The most common type of mirror mount is the kinematic mount.[1] This type of mount is designed according to the principles of kinematic determinacy. Typically, the movable frame that holds the mirror pivots on a ball bearing which is set into a hole in the fixed frame. Ideally this hole should be trihedral (pyramid-shaped). Often a conical hole is used due to easier manufacture. The frame is pivoted by means of two micrometers or fine-thread screws, tipped with steel ball bearings. One of these ball bearings rests in a V-groove, the other rests on a flat surface. On cheaper mounts, the flat surface may be simply the material of the mount. In more expensive mounts, the flat surface (and perhaps the hole and v-groove too) may be made out of a much harder material (often sapphire), set into the frame.

The reason for this strange mechanism, is that the first ball (ideally) makes contact with the fixed frame at exactly three points, the second ball at two, and the third ball at just one. These six points of contact exactly constrain the six degrees of freedom for motion of the movable frame. This leads to precise movement of the frame when the micrometers or screws are turned, without unnecessary wobble or friction. 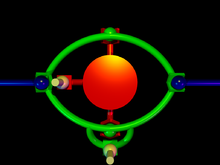 A caricature of a gimbal mount aka cardanic mount, showing all but the threads.

With both types of mount, springs are needed to keep the frame pressed against the ball bearings, unless the mount is designed to be used only in an orientation where gravity will keep the frame in place. Following the cantilever principle, a large mount allows finer control than a smaller one. The frames are ideally made of a light material, to make the resonant frequency of the structure high. This reduces vibration, since many common sources of vibration are relatively low frequency. For stability, the fixed frame is supported by a rigid mount that is securely bolted to a supporting surface. In a laboratory environment, this is typically an optical table.

The mount itself has to avoid deformation of the mounted optics. Stress from mounting can introduce aberration in the light reflected from a mirror, or photoelasticity inside a lens. In some lasers the mirrors have to be easily replaced, in which case the mount needs to be designed to allow the mirror to be removed and replaced without losing correct alignment.

The fine-thread screws show a slip and stick behaviour. So when used manually, a torque is applied with two fingers until the thread slips a bit. Then the new position is read on a scale. Inexpensive screws do long slips and lack a scale. Precision micrometers perform better and provide a scale for reference. When used remotely, an electric motor is used to apply short pulses of torque. The motor is firmly connected with the screw and the thread and nothing else so that the pulse is absorbed by friction. A small camera reads a Gray code scale. When the ball is not completely centered on the screw and the axis is not normal to the mirror surface (which is an explicit feature of some convenience mirror mounts), a small sinus movement of the mirror is overlayed onto the linear movement, which a controller could compensate for. For analog fine control (5 nm) piezos are built into the mobile frame. 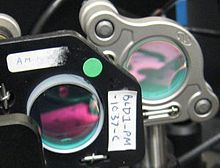 Laser cavity end mirrors need very precise alignment. Due to their low divergence laser beams need precise steering mirrors. For rapid prototyping on an optical table mirror mounts can be used to hold other elements besides mirrors, for example lenses often need to be aligned for minimal coma. Sometimes prisms only need two axes alignment and can be mounted on a mirror mount rather than a three-axis prism table.

Critical phase matched crystals can be aligned and tuned precisely with a standard mirror mount. The same is true for small etalons, retarders and polarizers. Furthermore, mirror mounts using magnets instead of springs allow the mobile frame to be removed and later replaced in exactly the same position.