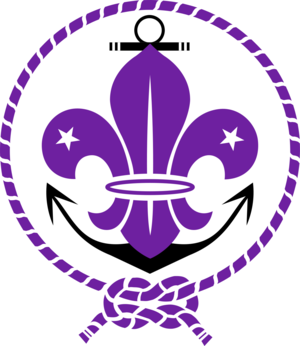 :"For the frogman-detector sonar system, see ."Sea Scouts are members of the international movement, with a particular emphasis on -based activities, such as ing, ing, sailing, and rowing. Depending on the country and the available water these activities are on lakes, rivers or sea in small or large ships. Sea Scouting can be a program for all Scouts or just older Scouts. Sea Scouts provides a chance to sail, cruise on boats, learn navigation, learn how to work on engines. Sea Scouts often compete in s.

Robert Baden-Powell grew up being constantly reminded of his family's naval connections. His maternal grandfather was Admiral William Smyth. In 1872, when he was 15, Baden-Powell accompanied his brothers on a cross-country expedition by collapsible canoe. They slept in tents and cooked their meals over open fires. Little wonder then that B-P was to write later on in his life that he started his Scouting as a Sea Scout. [cite web | last = | first = | authorlink = | coauthors = | year = | url = http://www.scoutingmilestones.freeserve.co.uk/seascouts.htm | title = The Early History of Sea Scouting| format = | work = | publisher = Scouting Milestones | accessdate = 2006-09-06]

Sea Scouting had its beginning at a campfire in when Baden-Powell voiced the hope that older Scouts would be interested in learning about boat management and seamanship. He stressed the need for young men to prepare themselves for service on their country's ships. Sea Scouting was introduced by Baden-Powell with the assistance of his brother, , K.C., an lawyer, sailor, and inventor of sailing. Lord Baden-Powell personally held a Scout camp at , in August 1909 which marked the start of Sea Scouts, though they were not officially named such until 1912. Warington Baden-Powell wrote the handbook "Sea Scouting and Seamanship for Boys" in 1910 with a foreword by Robert Baden-Powell. A special uniform was approved in 1910. [ [http://www.seascout.org/about/history-uk.html A Short History of Sea Scouting in the United Kingdom] ] It was enthusiastically received by the young men of Britain and soon found its way to the rest of the world. Warington Baden-Powell is also the author of "Canoe Travelling: Log of a Cruise on the Baltic, and Practical Hints on Building and Fitting Canoes" London, Smith, Elder, 1871.

In many organisations a Sea Scout troop or group has a special name, in the Boy Scouts of America it is called a ship.