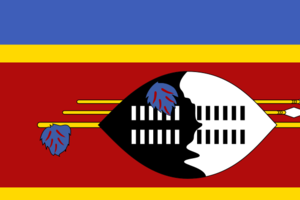 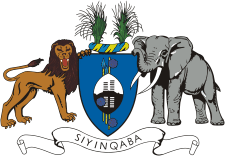 The Kingdom of Swaziland is a country located in Southern Africa, centred at approximately 26o49'S, 31o38'E. [ [http://www.worldatlas.com/webimage/countrys/africa/sz.htm Swaziland entry at WorldAtlas.com] ] It is relatively small in area, similar in size to . Swaziland is a country, bordered by on three sides except to the east, where it borders . The country, inhabited primarily by Bantu-speaking people, is named after the 19th century king Mswati II, from whom the people also take their name.

King Sobhuza II, who died in 1982, was one of the longest reigning monarchs of all time.

Artifacts indicating human activity dating back to the early Stone Age 200,000 years ago have been found in the kingdom of Swaziland. Prehistoric rock art paintings date from ca. 25,000 B.C. and continue up to the 19th century.

The earliest inhabitants of the area were s.They were largely replaced by the Bantu tribes during Bantu migrations. Evidence of and use dates from about the 4th century, and people speaking languages ancestral to current Sotho and languages began settling no later than the 11th century. The ruling Dlamini lineage had chiefships in the region in the 18th century. An enlarged Swazi (occasionally also written as SuoziFact|date=April 2008) kingdom was established by King Sobhuza I in the early 19th century. Soon thereafter the first whites started to settle in the area. In the 1890s the in the claimed sovereignty over Swaziland but never fully established power. After the of 1899&ndash;1902, Swaziland became a British . The country was granted independence within the on 6 September 1968. Since then, Swaziland has seen a struggle between pro-democracy activists and the monarchy.

The is the king or "Ngwenyama" (lit. "Lion"), currently , who ascended to the throne in 1986 after the death of his father in 1982 and a period of regency. By tradition, the king reigns along with his mother or a ritual substitute, the "Ndlovukati" (lit. "She-Elephant"). The former was viewed as the administrative head of state and the latter as a spiritual and national head of state, with real power counter-balancing that of the king, but during the long reign of Sobhuza II the role of the "Ndlovukati" became more symbolic. As the monarch, the king not only appoints the prime minister &mdash; the head of government &mdash; but also appoints a small number of representatives for both chambers of the Libandla (parliament). The Senate consists of 30 members, while the House of Assembly has 82 seats, 55 of which are occupied by elected representatives, (elections are held every five years in November).

In 1968, Swaziland adopted a Westminster-style constitution, but in 1973 King Sobhuza suspended it under a royal decree backed by the royalist majority of parliament: in effect a coup by the government against its own constitution. The State of Emergency has since been lifted, or so the government claims even though political activities, especially by pro-democracy movements, are suppressed. In 2001 King Mswati III appointed a committee to draft a new constitution. Drafts were released for comment in May 2003 and November 2004. These were strongly criticized by civil society organizations in Swaziland and human rights organizations elsewhere. In 2005, the constitution was put into effect, though there is still much debate in the country about the constitutional reforms. From the early seventies, there was active resistance to the royal hegemony.

Despite calls for international solidarity against the oppressive royal regime, Swaziland's human rights record remains largely ignored by the international community. The South African trade union COSATU has been the most vocal supporters of the rights of the Swazi people to govern themselves by democratic means.

Swaziland is divided into four regional administrative : , , and . Regions are further subdivided into "" administered by the "tindvuna" (royal aides or governors); each "inkhundla" in turn comprises several chiefdoms governed by chiefs as well as urban municipal areas and private lands.

The area of Swaziland is 17,364 square kilometers. It borders two countries, South Africa and Mozambique. Swaziland offers a wide variety of landscapes, from the mountains along the Mozambican border to s in the east and in the northwest. Several rivers flow through the country, such as the .

Swaziland's economy can be correctly classified as because it is a small economy that benefits a minority whose participation in it is safeguarded by relations with power. About 70% of Swazis live in rural areas that are periodically ravaged by drought, resulting in food crises that threaten hundreds of thousands with hunger. The unemployment rate is approximately 40%, and nearly 70% of the population live on less than one US dollar per day. The country has grown in to a medium (HDI) development score. Economic growth has wavered in the past few years, exacerbated by the economy's inability to create new jobs at the same rate that new job seekers enter the market. This is due largely to the country's population growth rate, which strains the natural resources and the country's ability to provide adequate , such as and . , , , and are persistent problems In 2004, Swaziland acknowledged for the first time that it suffered an AIDS crisis, with 38.8% of the population infected with HIV (see ). Prime Minister declared a humanitarian crisis due to the combined effect of drought, land degradation, increased poverty, and HIV/AIDS. The former special envoy on , Stephen Lewis, said “Swaziland stands alone with the world's highest rate of infection after nearby made headway against the deadly pandemic”. Nearly 60% of Swazi territory is publicly held by the crown in the trust of the Swazi nation. Despite the territories being held in trust by the crown, the land is still distributed to the people. The people are privileged to grow crops, make profit from selling their crops, graze live stock and build traditional/ modern homes without having to pay any tax/rates to the government. Most of the private ownership on the remaining 40% is by mixed Swazis, black Swazis, white Swazis and foreign investors. Part of the remaining 40% also includes the government and Tibiyo TakaNgwane, a company once held in trust on behalf of the Swazi nation but now serving the interests of the royal family. The question of land use and ownership remains very sensitive in the country. For Swazi living in rural homesteads, the principal occupation is a combination of subsistence farming, livestock herding, and migration by some homestead members to urban work or small-scale trade, in Swaziland or South Africa. Cattle are traditionally important symbols of wealth and status. Swaziland has well-developed road links with South Africa. It also has railroads running east to west and north to south. The older east-west link, called the line, makes it possible to export bulk goods from Swaziland through the Port of in Mozambique. Until recently, most of Swaziland's imports were shipped through this port. Conflict in Mozambique in the 1980s diverted many Swazi exports to ports in South Africa. A north-south rail link, completed in 1986, provides a connection between the Eastern Transvaal (now Mpumalanga) rail network and the South African ports of and . The sugar industry, based solely on irrigated cane, is Swaziland's leading export earner and private-sector employer. Soft drink concentrate (a US investment) is the country's largest export earner, followed by wood pulp and lumber from cultivated pine forests. , , and are other important agricultural exports. Swaziland mines and for export. There also is a industry for domestic consumption. Mining contributes about 1.8% of Swaziland's GDP each year but has been declining in importance in recent years mainly due to new legislation that guarantees that the king will have ownership of 10% of the shares in each mining enterprise. Recently, a number of industrial firms have located at the industrial estate at Matsapha near Manzini. In addition to processed agricultural and forestry products, the fast-growing industrial sector at Matsapha also produces garments, textiles, and a variety of light manufactured products. The Swaziland Industrial Development Company (SIDC) and the Swaziland Investment Promotion Authority (SIPA) have assisted in bringing many of these industries to the country. Government programs encourage Swazi entrepreneurs to run small and medium-sized firms. Tourism also is important, attracting more than 424,000 visitors annually (mostly from Europe and South Africa). From the mid-1980s foreign investment in the manufacturing sector boosted economic growth rates significantly, in part due to efforts to evade anti- sanctions against South Africa. Since mid-1985, the depleted value of the currency has increased the competitiveness of Swazi exports and moderated the growth of imports, generating trade surpluses. During the 1990s, the country often ran small trade deficits as some companies moved to South Africa. South Africa and the European Union are major customers for Swazi exports. The United States is a significant market for Swazi sugar, a market that would presumably extend to textiles should Swaziland become a beneficiary of the The official currency is the (plural: emalangeni), which is at par with the . Swaziland, Lesotho, Botswana, Namibia, and the Republic of South Africa form the Southern African Customs Union (SACU), where import duties apply uniformly to member countries. Swaziland, Lesotho, Namibia, and South Africa also are members of the Common Monetary Area (CMA) in which and unrestricted funds are permitted. Swaziland is in the process or formulating an Action Programme on the Elimination of Child Labour, which is expected to be adopted in the period 2006-2007.

A large part of the Swaziland's revenue comes from The Coca Cola Company, who for tax reasons and the easy access to vast amounts of cheap raw Swazi sugar, have located their concentrate plant in the country. The Coca Cola Company Concentrate plant exports to a wide range of countries in Africa and elsewhere. It is now a yearly tradition for the King to pay a visit to the CEO of Coca Cola at their headquarters in Atlanta, Georgia.

Swaziland's most well-known cultural event is the annual . The country was under the chastity of "" until 19 August 2005.

The majority of Swaziland's population is ethnically Swazi, mixed with a small number of Zulu and , mostly people of British and descent. Traditionally Swazi have been and herders, but most now mix such activities with work in the growing urban formal economy and in government. Some Swazi work in the mines in South Africa. Swaziland also received Portuguese settlers and African refugees from Mozambique. in Swaziland is sometimes mixed with traditional beliefs and practices. Many traditionalists believe that most Swazi ascribe a special spiritual role to the monarch. Residents of Swaziland have the lowest documented life expectancy in the world at 32.2 years, less than half the world average of 65.8. [(cite web|url=http://www.infoplease.com/ipa/A0934746.html|title=Life Expectancy on infoplease.com]

"SiSwati" [ [http://www.state.gov/r/pa/ei/bgn/2841.htm Background Note from U.S. Department of State] ] (also known as "Swati", "Swazi" or "Seswati") is a Bantu language of the Group, spoken in Swaziland and . It has 2.5 million speakers and is taught in schools. It is an official language of Swaziland (along with English) and one of the official languages of . About 76,000 people in the country speak Zulu. [cite web|url=http://www.ethnologue.com/show_country.asp?name=SZ|title=Ethnologue report for Swaziland] Tsonga, which is spoken by many people throughout the region is spoken by about 19,000 people in Swaziland.

The most common religion in Swaziland is which totals 82.70% of the total population, in which various including constitute the majority, followed closely by . There are also non-Christian religions practised in the country such as (0.95%), the (0.5%), and (0.15%). [ [http://www.religiousintelligence.co.uk/country/?CountryID=161 Religious Intelligence - Country Profile: Swaziland (Kingdom of Swaziland)] ]