Narimanov Nariman Karbalayi Najaf oglu (Azerbaijani: Nərimanov Nəriman Kərbəlayi Nəcəf oğlu, Russian: Нарима́нов Нарима́н Кербелаи Наджа́ф оглу; April 2, 1870, Tbilisi—March 19, 1925, Moscow) was an Azerbaijani revolutionary, writer, publicist, politician and statesman. In 1920, Narimanov headed the Soviet government of Azerbaijan, the Provisional Military-Revolutionary Committee (16 May 1920 - 19 May 1921), replacing Mirza Davud Huseynov, then he was the Chairman of the Council of People's Commissars (May 1921 - 1922). In 1922, he was elected chairman of the Union Council of the Transcaucasian SFSR. He was also Party Chairman of the Central Executive Committee of the Soviet Union from December 30, 1922, until the day of his death. Narimanov translated into Turkic Nikolai Gogol's The Government Inspector and wrote a large number of plays, stories, and novels, such as Bahadur and Sona (1896). He was also the author of the historical trilogy Nadir-Shah (1899).

The district in Greater Baku, Azerbaijan Medical University and metro station in Baku are named after him. In the Lankaran region there is a town named Narimanabad in his honour. There are cities named after him also in Russia and Belarus.

Born April 2 (14), 1870, in Tiflis, into a poor Azerbaijani family. After graduating from the Transcaucasian Teachers Seminary, he received the position of teacher in a village of Gizel-Adjal, Tiflis Province, where he became closely acquainted with the hard life of the local peasantry. Later, Narimanov became a teacher in a private pro-gimnasia in Baku, where he founded the first public free-access library and reading hall. This became a cultural center of the entire Transcaucasia. In 1902, at the age of 32, Narimanov entered the Medical Department of Novorossiysk University. During the revolution of 1905-1907, Narimanov took an active part and led the student movement in Odessa. In 1905 he joined the Russian Social-Democratic Workers' Party. Upon his return to Baku, Narimanov guided the Congress of Transcaucasian Turkic Teachers; under his influence, the Congress adopted a resolution on national self-determination of Transcaucasia. A little later, Nariman Narimanov became one of the organizers of the Persian socialist democratic party Isheyun-Asheyun. Soon, Narimanov was exiled to Astrakhan for five years for his activities. After the October Revolution of 1917, Nariman Narimanov became the chairman of Azerbaijani social democratic organization Hummet (Endeavor). 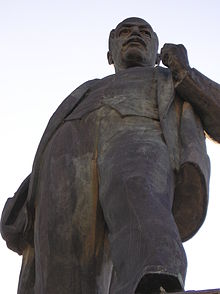 The monument to Nariman Narimanov in Baku

In 1920, Narimanov was named the chairman of Azerbaijani Revolutionary Committee (Azrevkom) and, shortly thereafter, the Chairman of the Council of People's Commissars' (Sovnarkom) of the Azerbaijani Soviet Republic. In April and May 1922, took part in Genoese Conference as a member of the Soviet delegation. In 1922, was elected the chairman of the Union Council of Transcaucasian Federation. On December 30, 1922, the first session of the Central Executive Committee of the USSR elected Narimanov one of the four chairpersons of the Central Executive Committee of the USSR. In April 1923, Narimanov was elected a candidate to the members of Central Committee of RKP(b) (Russian Communist Party of Bolsheviks). He clashed with Joseph Stalin's close associate Sergo Ordzhonikidze, who led the Communist Party in Transcaucasia. As a result of this conflict, Ordzhonikidze had Narimanov transferred to posts in Moscow to remove him from the scene of action in the Caucasus region. Nariman Narimanov died in Moscow on March 19, 1925 under suspicious circumstances[citation needed]. He died of a heart attack and his remains were cremated. His ashes were buried in Kremlin Wall Necropolis. Narimanov was survived by his wife Gulsum and by his son Najaf. Najaf Narimanov studied in Moscow, joined the Red Army in 1938 and graduated from the Kiev Higher Military Radio-Technical Engineering School in 1940. He became a member of the Communist Party in 1942. During the Great Patriotic War, he was a commander of a tank division and took part in the Battle of Stalingrad and in the Battle of the Dnieper. Najaf died in battle near Volnovakha in Ukraine.

In the day of his death the Kazan trakt in Ulyanovsk was renamed Narimanovskoye avenue (later and today known as Narimanov Prospect). At the end of the avenue there's a square that was also named after him. In December 1977 the monument to N. Narimanov was opened on that square.

Narimanov was one of the first activists of young Turkic literature. He translated into Turkic Gogol's Inspector and wrote a large number of plays, stories, and novels; the most well-known among them are the novel Bahadur and Sona (1896) and an historical trilogy Nadir-shah (1899).

Narimanov was an ardent Bolshevik but he was also a moderate Azeri nationalist and always put the interests of the Azerbaijan SSR before everything else, even at his own risk (he died in Moscow under suspicious circumstances[citation needed]). He is viewed in retrospect as a forerunner of "National Communism." Narimanov was one of the most popular and charismatic leaders of his country; he was sometimes called "the Lenin of the East".