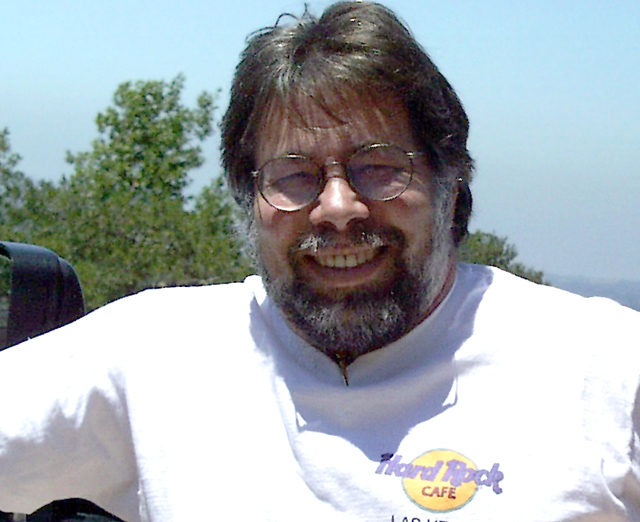 Stephen Gary "Woz" Wozniak (born in San José, ) is an American of descent, and the co-founder of Apple Computer (now ), with . His inventions and machines are credited with contributing greatly to the revolution of the 1970s. Wozniak created the and Apple II computers in the mid-1970s. The Apple II gained a sizable amount of popularity, eventually becoming one of the best selling personal computers of the 1970s and early 1980s.

Wozniak has several s, including "The Woz", "Wonderful Wizard of Woz" and "iWoz" (a reference to the ubiquitous naming scheme for Apple products). "WoZ" (short for "") is also the name of a company Wozniak founded. He is known for his introverted character, and he finds his level of celebrity somewhat annoying. He is also known as the "Other Steve" of Apple Computer, the better known Steve being co-founder and current CEO .

By 1975, Wozniak withdrew from the (he would later return to finish his B.S. degree in E.E.C.S., which he received in 1986 enrolled under the alias Rocky Clark) and came up with the computer that eventually made him famous. However, he was largely working to impress other members of the Palo Alto-based , a local group of electronics hobbyists. His project had no wider ambition.

In 1970 Wozniak had become friends with Steve Jobs, 4½ years his junior, when Jobs had a summer job at the same business where Wozniak was working on a mainframe computer. [ "In mid-1970, at the end of his sophomore year in high school, when he finished McCollum's electronics class, Steve was also finished with formal training in electronics. That summer he worked at Haltek and became close friends with both Wozniak and Baum, who were working as systems programmers on a nearby mainframe computer. Much of his advanced training in electronics would come at Wozniak's elbow, and the two older boys, who were both deeply involved in improving the design of the Flair pen computer of the previous year, allowed Steve to tag along as they conducted research into the stacks at the Stanford library and pored over the product literature and specifications that arrived daily at Woz's house" "Steve Jobs - The Journey Is The Reward" ] According to his autobiography , Jobs had the idea to sell the computer as a fully assembled P.C. board. Wozniak, at first skeptical, was later convinced by Jobs that even if they were not successful they could at least say to their grandkids they had their own company. Together they sold some of their prized possessions (such as Wozniak's H.P. scientific calculator and Jobs' van), raised USD $1,300, and assembled the first prototypes in Jobs' bedroom and later (when there was no space left) in Jobs' garage. The Apple I Computer was similar to the Altair 8800, the first commercially available personal computer, except it had no bus structure allowing users to add memory cards and interface cards. With the addition of these cards, the Altair could be attached to a computer terminal and it could be programmed in BASIC. The Apple I was a pure hobbyist machine, a $20 (M.O.S. 6502) on a single-circuit board with ROM. It lacked RAM, a keyboard, and a monitor to make it a fully functional microcomputer.

On , , Jobs and Wozniak formed . Wozniak quit his job at H.P. and became the vice president in charge of research and development at Apple. The Apple I was priced at $666.66 (Wozniak later said he had no idea about the correlation between the number and the mark of the beast, and "I came up with [it] because I like repeating digits." It was $500, plus a 33% markup.). Jobs and Wozniak sold their first 100 computers to Paul Terrell, who was starting a new computer shop, called the Byte Shop, in Mountain View, California. Terrell bought just the circuit board for the Apple I, he had to supply the keyboard, monitor, transformer, and even the case in which to put the computer.

Wozniak could now focus full-time on fixing the shortcomings of the Apple I and adding new functionality. His new design was to retain the most important characteristics: simplicity and usability. Wozniak introduced high-resolution graphics in the Apple II. His computer could now display pictures instead of just letters: "I threw in high-res. It was only two chips. I didn't know if people would use it". By 1978, he also designed an inexpensive floppy-disk drive controller. He and wrote a simple disk operating system and file system. was contracted to build a simple command line interface for the disk operating system.

In addition to designing the hardware, Wozniak wrote most of the software initially provided with the Apple. He wrote a programming language interpreter, a set of virtual processor instructions known as SWEET 16, a Breakout game (which was also a reason to add sound to the computer), the code needed to control the disk drive, and more.

In 1980, Apple went public and made Jobs and Wozniak multimillionaires.

In February 1981, Steve Wozniak crashed his while taking off from . The NTSB investigation revealed that Wozniak was not rated in the type of airplane, did not have a "high performance" endorsement on his pilot's license (making him unqualified to operate the airplane), and had a "lack of familiarity with [the] aircraft." The cause of the crash was determined to be a premature liftoff, followed by a stall and "mush" into a 12 foot embankment. As a result of the accident, he had and temporary . He had no recollection of the accident and, for a while, did not even know he had been involved in a crash. He also did not remember his hospital stays or the things he did after he was released: he followed his previous routine (except for flying), but could not recall what had happened. He would walk into rooms and forget why he was there and couldn't even remember the current day of the week. For example, he would go to work on Sunday, or stay home on a Wednesday, thinking it was the weekend. He began to piece together clues from what people told him. He asked his girlfriend, Candice Clark (an early Apple employee who worked in the accounting department), whether he had been involved in an accident of some kind. When she told him about the event, his short-term memory was restored.

Wozniak and Clark got engaged later that year, ordered their wedding rings from a San Diego jeweler, and flew to San Diego to pick them up. Wozniak also credits Apple II s for aiding him in restoring those "lost" memories.

Wozniak did not return to Apple after recovering from the plane crash. Instead, he married Clark (he called her "Superwoman", possibly because of her accomplishments as an Olympic kayaker in 1976) [ [http://www.macobserver.com/columns/thisweek/2004/20040613.shtml "This Week in Apple History"] from "The Mac Observer" ] and returned to U.C. Berkeley under the name " Clark" (Rocky was his dog's name and Clark his wife's maiden name), finally earning his undergraduate degree in 1986. In 1983 he decided to return to Apple product development, but he wanted no more of a role than that of an engineer and a motivational factor for the Apple workforce.

In May 1982 and 1983, Wozniak also sponsored two s to celebrate evolving technologies; they ended up as a technology exposition and a rock festival as a combination music, computers, television and people. They differed from previous rock festivals, notably Woodstock, by shorter lines for the sFact|date=August 2008: Wozniak is an engineer, and simply computed the number of Port-a-Potties that would be needed, using less optimistic assumptions than previous concert organizersFact|date=August 2008. (This experience would help him when the time came to build ).Fact|date=August 2008

In 1986, Wozniak lent his name to the "Stephen G. Wozniak Achievement Awards" (referred to as "Wozzie Awards"), which he presented to six Bay Area high school and college students for their innovative use of computers in the fields of business, art and music.

Wozniak ended his full time employment with Apple for good on , twelve years after setting up the company. However he still remains an employee (and receives a paycheck)

Wozniak founded a new venture called C.L. 9, which developed and brought the first universal TV to market in 1987.

Wozniak went into teaching (he taught fifth grade students) and charitable activities in the field of education. Since leaving Apple Computer, Wozniak has provided all the money, as well as a good amount of on-site technical support, for the technology program for his local school district. Un.U.Son. (Unite Us In Song), an organization Wozniak formed to organize the two U.S. Festivals, is now primarily tasked with supporting his educational and philanthropic projects.

Wozniak received the in 1985 from , then President of the U.S.

In December 1989, he received an honorary Doctor of Engineering from the University of Colorado.

In September 2000, Steve Wozniak was inducted into the .

In 2001, Wozniak co-founded (note the , "WoZ"), to create wireless technology to "help everyday people find everyday things". In 2002, he joined the Board of Directors of Ripcord Networks, Inc., joining , , Mike Connor, and co-founder , all Apple alumni, in a new venture. Later the same year he joined the Board of Directors of Danger, Inc., the maker of the Hip Top (a.k.a. Side Kick from T-Mobile). In May of 2004, upon nomination by Dr. Tom Miller, Wozniak received an honorary S.D. degree from for his contribution to the field of personal computing.

In May 2004, Wozniak was awarded an honorary Doctor of Engineering degree from , in Flint, . He also received an honorary S.D. from , Fort Lauderdale, Florida, and the Telluride Tech Festival Award of Technology. In 2006, Wheels of Zeus was closed, and Wozniak co-founded , a shell company for acquiring technology companies and developing them, with Apple alumni and .

In September 2006, Wozniak published his autobiography, "". It was co-authored by writer Gina Smith.

Steve is currently working on three new books, one of which is on pranks.

* An attributed to Wozniak, "Never trust a computer you can't throw out a window", is quoted in the game, "", when players discover the "s" technology during single player games.
* In the movie "", 's character scams parents into sending their kids to a computer camp under the fake name of Dennis Wozniak.
* Wozniak stars as a parody of himself in the first episode of the TV series "" when he is the owner of Gameavision before selling it to help fund Apple. He later appears again in the 12th episode when he is in Las Vegas at the annual Video Game Convention and sees Dave and Jerry. Woz also appears in a parody of the "Get a Mac" ads featured in the final episode of Code Monkeys Season 2.
* Steve Wozniak is the inspiration behind "" character Woz the Whiz.

On July 11, 2008, Wozniak showed up at the Apple Store at the Valley Fair Mall in San Jose, CA, offering doughnuts to customers waiting to purchase Apple's new iPhone 3G.

Wozniak is interviewed and featured in the upcoming documentary "".

*
* "" - an autobiography.
* "" - A movie based on the rise of Apple and Microsoft; Wozniak is portrayed by actor .
*"" - A documentary about the rise of the P.C. industry by Robert Cringely