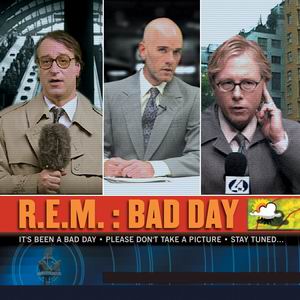 "Bad Day" is a song and single released by .

The song first appeared in 1985, when sang a few words of it during a concert in as part of the Reconstruction tour. Then, around the time of "", the song emerged in a more polished version with the title "PSA" — an abbreviation for "". An anti-media rant inspired by a day Stipe found a camcorder lens in his face when he answered the front door, the song was never released but did serve as a sort of forerunner to "", a song with a similar cadence and delivery. In 1999, REM revisited the song after a well publicized late night spat at the Slipper Room in New York City between Michael Stipe and Craig Ricci (who would later become front man of the indie pop sensation The Tiles). In 2003, Stipe saw that the song still had contemporary resonance, and the band finally recorded it for "In Time", with only slightly updated lyrics and under the new title "Bad Day".

It is included on R.E.M.'s Warner Bros.-era-spanning 2003 compilation "". In addition, a demo version of the song recorded for "Lifes Rich Pageant" appears on 's 2006 compilation, "".

The song's [http://www.passion-pictures.com/flash.html#page=d16&video=v27] , directed by and shot in , is a spoof of media news and was produced by . It appears on "In View", the DVD companion of "In Time", and is also found on the main CD of "In Time". In the video, Stipe appears as the Morning Team's news anchor Cliff Harris; Mills doubles as roving reporter Ed Colbert and meteorologist Rick Jennings; and Buck as climate expert Geoff Sayers and the reporter Eric Nelson. News stories shown include a monsoon contained within an apartment, a senator's office flooding, and a tornado inside a boy's bedroom.

The song can be heard in a third-season episode of "Alias" and in the episode of "Scrubs", "My Advice To You".

The song is included on "".