A Passage to India (film)

A Passage to India (film) 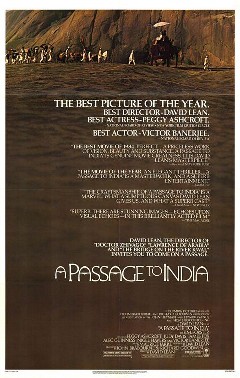 The film is set during the period of growing influence of the in the . It begins with the arrival in India of a British woman, Miss Adela Quested (), who is joining her fiancé, a city named Ronny Heaslop (). She and Ronny's mother, Mrs. Moore (), befriend an Indian doctor, Aziz H. Ahmed (). Dr. Aziz meets Mrs. Moore for the first time in the moonlight at an abandoned on the river , and he soon finds that Mrs. Moore possesses a sensitivity and unprejudiced attitude to native Indians which endears her to him. When Mrs. Moore and Miss Quested profess an interest in seeing "the real India" (as opposed to the Anglicised environment Ronnie and his friends have constructed for themselves), Aziz offers to host an excursion to the Marabar Caves, a local geological feature (to avoid asking them to his shabby bungalow).

Adela and Mrs. Moore agree readily, and the outing goes reasonably well until the two women begin exploring the caves. Mrs. Moore experiences an overwhelming sense of horror which completely quenches her good humor; worse, Miss Quested forms the delusion that Aziz is making sexual advances toward her. She flees the cave in a panic and is discovered running headlong down the hill, bloody and disheveled. Aziz is immediately jailed to await trial for attempted rape, and an uproar ensues between the Indians and the Colonials.

Adela is not a vindictive or even an unusually neurotic person; rather, she is suffering from an abnormal mental state brought about by various factors: the remorseless heat, the strangeness of her surroundings, her growing dismay over her future husband's small, mean character, and (perhaps) her feelings of attraction, fraught with shame, for Dr. Aziz. Even as her case becomes a among the British, her mind gradually clears and she realizes she has made a mistake. There is also a subtext present in the film concerning Mrs. Moore's feelings concerning old age and her impending mortality. Though she waits bed-side with Miss Quested in support, she makes clear to Ronny that she firmly believes in Aziz's innocence. Because of her refusal to testify, and the fear by the Anglo-Indians that she would bolster the case of the defense Mrs. Moore leaves for England. She subsequently suffers a heart attack on the voyage and dies.

To the consternation of her friends, Miss Quested clears Dr. Aziz in open court. The Colonials are forced to make an ignominious retreat while the Indians carry Dr. Aziz out of the courtroom on their shoulders, cheering wildly. In the aftermath, Miss Quested breaks off her engagement and leaves India, while Dr. Aziz abandons his Western attire, dons traditional dress and withdraws completely from Anglo-Indian society, opening a clinic in Northern India at the . Although he remains angry and bitter for years, the final scene shows Miss Quested at home in England, reading a letter from Dr. Aziz conveying his thanks and forgiveness.

While the film is relatively faithful to the novel, the ending is changed. The book ends with a bitter Aziz talking about how the British must be driven out and telling his British friend that because of their nationalities they can no longer be friends; while it is implied that someday British and Indians might be friends, the book concludes that it could not happen in the present. Despite scenes invoking Aziz's anger at the injustices foisted upon him and all native Indians, and his resolution to quit British India, the film concludes with a later scene of Aziz forgiving Miss Quested. It may be argued that this waters down Forster's original act about racial tensions and Indian independence.

agreed to the role as Godbole despite having quarrelled with David Lean in the early 1960s. Lean had wanted him to play the title role in a proposed film about (a project ultimately scrapped). According to Guinness's biography, Lean wanted him to play Gandhi because he felt "Hindus couldn't act". Guinness and Lean quarreled again on "Passage to India", as they had on most of their other collaborations, and most of Guinness's scenes were cut for timing reasons. Guinness called it the worst role he ever did, and Lean agreed, remarking that "we paid for that casting". (, "Alec Guinness: The Authorized Biography".)

As per was suggested by for the role of Dr. Aziz

When met in London in the 1960s, during the run of 's stage adaptation of "Passage to India", he told her that he hoped she would one day play Mrs. Moore. Her eventual casting in the film was largely due to lobbying by . had also been considered for the part. (, "David Lean: A Biography", p. 650)

had actually played Hamidullah in Rau's play of "India" and the BBC television version with as Aziz, and was asked by Lean to reprise his role.

was Lean's first choice for the part of Fielding but the role eventually went to . (Brownlow, 672-3) was cast as Turton but became ill and was replaced by Richard Wilson.

The "Marabar Caves" in the film and novel were based on the , some 35km north of Gaya. Lean visited the caves during pre-production but found them unphotogenic; concerns about bandits were also prevalent. Instead he used two separate hills a few miles from , where much of the principal filming occurred, and the caves themselves were created by the production company. [http://www.mapability.com/travel/p2i/marabar.html]

"A Passage to India" did moderately well at the box office, taking in some $26 million in the US, but was not a blockbuster hit. However, the film was a critical success and revived Lean's reputation as a film maker.

The film won the .

Connections with other films

According to Peter McLuskie of the , "Passage of India" can be linked to "a cycle of film and television productions which emerged during the first half of the 1980s, which seemed to indicate Britain's growing preoccupation with India, Empire and a particular aspect of British cultural history" [http://www.museum.tv/archives/etv/J/htmlJ/jewelinthe/jewelinthe.htm] . McLuskie suggests that other films in this cycle include "Gandhi" (1982), "" (1983), "" (1983), "The Jewel in the Crown" (1984) and "" (1985). This preoccupation extended to "escapist" fare like the adventure "" (1983), and even the Hollywood film "" (1984), which were also primarily set in India.