Doosan Group is a South Korean conglomerate quoted on the Korea Stock Exchange. Doosan has been placed 471st in the Fortune 2009. It has been included in the Forbes Global 2000 companies from 2007. It had recently acquired SKODA power thus making it a full swing in power plant global competitors. Doosan was ranked 4th among the “World’s Best 40 Companies 2009” list, released in the latest issue of BusinessWeek, the U.S. economics magazine in October 2009. Fortune Global 500[2]

The Doosan Group, founded in 1896.[3] The company began as the Park Seung Jik Store in 1896 in Baeogai (now Jongno 4-ga, Seoul). Since then, Doosan has developed into a multinational, diversified business empire, with particular emphasis on consumer goods, manufacturing and the trading and construction sectors.

In 2006, Doosan acquired a number of global companies, including the boiler engineering company Mitsui Babcock UK (renamed Doosan Babcock) and Kvaerner IMGB, the largest casting and forging company in Romania. In 2007, Doosan acquired a leading construction machinery company, Bobcat USA, the world’s largest supplier of small construction equipment. Post acquisition of Bobcat USA into Doosan Infracore, one of the Doosan Group’s subsidiary companies specializing in medium and large construction machinery, the Doosan Group became the world’s seventh largest supplier of construction machinery.[3] Doosan currently has 25 subsidiary companies in Korea and 86 overseas branch corporations in 35 countries. It has over 38,000 employees (20,000 in Korea and 18,000 overseas) and a worldwide network of over 1,400 dealer network.[3]

Doosan now has core technologies for boilers, turbines and generators(BTG) - the three key components of modern fossil-fuel power plants. This now positions the company in the same league as GE of the US, Siemens of Germany and Alstom of France.[4] According to the FT(The Financial Times, the UK-based business paper) report of Sep 29 2010, through a series of big acquisitions, Doosan Heavy has become the fourth-largest power-plant equipment maker in the world, behind General Electric of the US, Germany’s Siemens and ABB, the Swiss-Swedish engineering group.[5]

Compiled by UK-based KHL Limited and published in the magazine, International Construction, the new up-to-date tabulation gives 2010 turnover figures for the world’s top 50 construction equipment manufacturers and shows growth in sales at DICE(Doosan Infracore Construction Equipment, the global alliance of construction brands that includes Doosan, Bobcat and Doosan Moxy) has taken the company into 6th place in 2010.[6]

Nuclear and other power equipment

Doosan has shipped the equipment composed of control element drive mechanisms (CEDMs) and replacement reactor vessel heads to the Palo Verde Nuclear Generating Station power plant in Tonopah, Arizona, which has a production capacity of 1,400 MW of electricity. It has sold nuclear power plant equipment to the largest nuclear energy generating facility in the United States. A reactor vessel head is used to maintain the pressure resistance of a coolant, while a CEDM is a device used to control the degree of a nuclear reaction.[7] The new contract for Doosan, worth some $195 million, closely follows an earlier contract from Westinghouse to supply major equipment, such as steam generators and reactor vessels, for two AP1000s units to be constructed at Georgia Power's Vogtle nuclear power station near Augusta, Georgia. Subject to approvals, the two units are slated to enter service alongside Vogtle's two existing reactors in 2016 and 2017.

Doosan announced at the end of May 2008 that it had signed a memorandum of understanding (MoU) with China National Nuclear Corp (CNNC) on cooperation on new nuclear power projects in China. Among the projects commissioned by CNNC in China, Doosan supplied the steam generators for both Qinshan Phase-3 units (Qinshan-4 and -5), the reactor vessels for both Qinshan Phase-2 units (Qinshan-2 and -3), as well as equipment for the two AP1000 units at Sanmen and two at Haiyang[8] 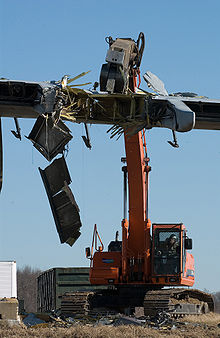 Doosan material handler machine removes the wing of a destroyed aircraft at the end of runway 32 in Dover Air Force Base, Del, USA., Jan. 17, 2007.

Doosan Infracore has been established a holding company in China and has significantly expanded its Chinese operations. Doosan Infracore recently acquired Bobcat and the Attachments and Utilities business unites of Ingersoll-Rand. Doosan Infracore divisions include Construction Equipment, Machine Tools, Forklifts and Engines & Materials.

Bobcat Company is a manufacturer of farm and construction equipment, part of Doosan Group. The company sells skid steer loaders, compact excavators, compact utility vehicles, compact tractors and other small hydraulic equipment under the Bobcat brand name. It is one of the few major manufacturing companies operating in North Dakota.

The Ingersoll Rand brand has been in the forefront of compressor technology, design and manufacturing since the early 1900s. Ingersoll-Rand Company was started over 100 years ago with an emphasis on drilling products for construction and mining. Ingersoll Rand has led the industry with breakthrough technology that has shaped and defined the world with its legacy products: air compressors, generators, and lighting systems. 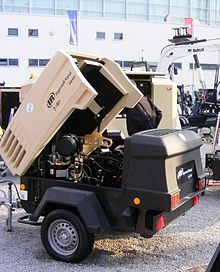 Moxy Engineering is a Norwegian manufacturer of articulated haulers for off-road use in the earth moving and construction industries. Doosan Infracore's Construction Equipment Business Group acquired 100% of the company from Thomson Group and changed the name as Doosan Moxy AS.

Montabert was founded in 1921 by Joannes Montabert as Montabert S.A as a manufacturer of pneumatic equipment. Montabert is based in the Lyon area, France and is the undisputed worldwide leader for the design, production and distribution of hydraulic and pneumatic demolition and drilling equipment for construction and civil works as well as the mining and quarry industry.

Geith was founded over 50 years ago in Slane, Ireland. They offer a full range of products for machines from 1 ton to over 80 ton in weight for a large variety of applications and duty requirements.

: A Bobcat tractor is used by U.S. Navy Seabees, assigned to Naval Mobile Construction Battalion Two Four (NMCB-24), to lift bags of sand to a side portion of the roof.

Doosan IMGB, the largest casting and forging company in Romania.

(formerly Mitsui Babcock) was purchased in 2006 from Mitsui Engineering & Shipbuilding of Japan. As one of the four companies in the world with its own proprietary technology in the field of boiler engineering, Doosan Babcock Energy was established in the U.K. by US-based Babcock & Wilcox in 1891. Currently, Doosan Babcock is headquartered in Crawley in the UK and has an R&D centre and production base in Renfrew, Scotland. It also has subsidiary companies in Germany, Poland, USA and China, which serve as power generation service centers. Doosan Babcock has supplied boilers to over 30 countries including the U.S. and China as well as Europe and has a license agreement with Harbin Boiler, the largest boiler maker in China and producer of 26,000MW of boiler to date. Doosan Babcock has been expanding its nuclear power plant business in the U.K. since the acquisition of the nuclear power business unit of Rolls Royce in 2002.

Moxy Engineering is a Norwegian manufacturer of articulated haulers for off-road use in the earth moving and construction industries. Moxy was founded by the industrialist Birger Hatlebakk, who had previously founded the Glamox factory in Molde.

ATL is located in Lubben, outside Berlin(Germany) and has the original technology to support the production of material handling equipment for warehouses and airports.

SKODA POWER is a manufacturer and supplier of SKODA design steam turbines from 5 MW to1,200 MW, machine halls and of customer services for fossil and nuclear power plants, combined cycles, co-generation and incineration plants.