The creation of the imperial University by Napoleon I in 1808 stimulated the formation of a number of faculties of Humanities and of Science in the main cities of the French Empire.

At that time, Montpellier had already a long-established medical college and a school of Pharmacy, but also a respected Royal Society of Sciences created in 1706. In 1810, a Faculty of Science started with initially seven chairs: mathematics, astronomy, physics, chemistry, zoology, botany, and mineralogy.

In 1879, the faculty created a research station of marine biology in Sète, and, twelve years later, and Institute of Botany (which is still part of University Montpellier 2). The Institute of Chemistry, created in the same period, became the Ecole Nationale Supérieure of Chemistry of Montpellier in 1941.

In 1964, the faculty left the centre of Montpellier to settle in a 30 hectare campus to the north of the city on which 146 000 m2 of buildings for teaching and research were built. 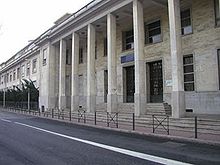 Institute of Botany of Montpellier

The University Montpellier 2 retains the Institute of Botany of Montpellier (created in 1889 by Professor Charles Flahault), which is close to the botanical garden of University Montpellier 1. Partly demolished after World War II, most of the buildings date from 1956. The building houses a prestigious herbarium, the largest in France after the national museum of natural history, with approximately 4 million samples and an important collection of botany vellums, and research laboratories in the fields of ecology and parasitology. The station of marine biology in Sète has been part of the University since 1879.

In addition to these collections, the university's media library brings together its old collections of printed works, manuscripts, and iconography (including, for example, the library of the work of Felix Dunal, bequeathed to the Faculty of Science in 1856). These collections are publicly accessible given a reasonable request.

The university is also the seat of the Pôle universitaire de Montpellier which collectively represents the higher education establishments in the Languedoc-Roussillon region.

The University Montpellier 2 (called Université des Sciences & Techniques[1]) is a multi-discipline university whose teaching and research centre on the sciences and technological research.