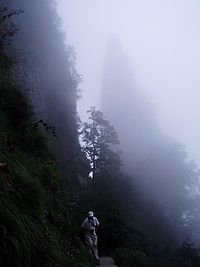 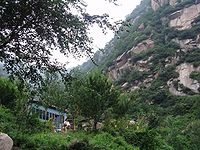 The Taihang Mountains (Chinese: 太行山; pinyin: Tàiháng Shān) are a Chinese mountain range running down the eastern edge of the Loess Plateau in Henan, Shanxi and Hebei provinces. The range extends over 400 km from north to south and has an average elevation of 1,500 to 2,000 meters. The principal peak is Xiao Wutaishan (2,882 metres). Cangyan Shan in Hebei forms the eastern tip of the Taihang range.

The Red Flag Canal is located on the edge of the Taihang Mountains.

The Shitai Passenger Railway crosses under the Taihang Mountains in Taihang Tunnel which, at almost 28 km, is the longest railway tunnel in China.