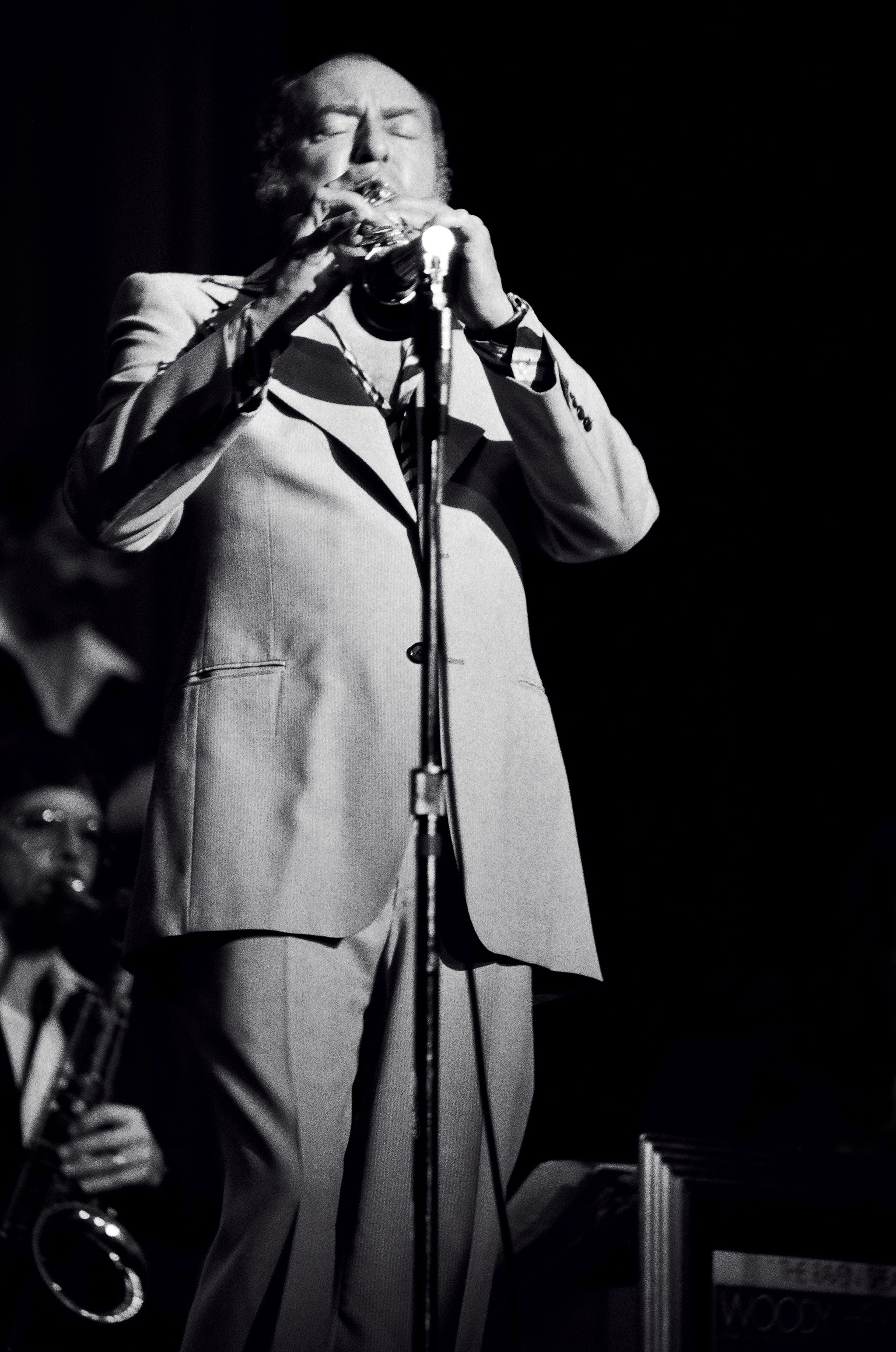 Leading a group called "The Herd," Herman was one of the most popular of the 1930s and '40s bandleaders.

Herman was born Woodrow Charles Thomas Herman in on May 16, 1913. [Lees 4] His parents were Ray and Myrtle Herrman. [Lees 5] As a child he worked as a singer in , then became a professional player at age 15. In 1931, he met Charlotte Neste, an aspiring actress. [Clancy 13] They later married. Woody Herman joined the Tom Gerun band and his first recorded vocals were "Lonesome Me" and "My Heart's At Ease". [Clancy 15] Herman also performed with the orchestra [Clancy 16] and and . [Clancy 17] Isham Jones wrote many popular songs, including "It Had To Be You" [http://www.songwritershalloffame.org/exhibit_home_page.asp?exhibitId=295] and at some point was tiring of the demands of leading a band. Jones wanted to live off the residuals of his songs. "While we were with Jones, we discussed the possibilities of [Woody being the leader] after we heard Isham was going to quit." [Clancy 20] Woody Herman eventually acquired the remains of Jones' orchestra after Isham Jones decided to retire.

Woody Herman's first band became known for its orchestrations of the and was sometimes billed as "The Band That Plays The Blues" (a name preserved as a cultural reference in 's single, "Big Ten Inch Record"). "The numbering of the early Herman bands has caused much confusion among fans and musicians. A few individuals consider Woody's first band or 'The Band That Plays The Blues,' the 'First Herd,' but among the majority of music critics and writers, the 'First Herd' refers to the band of 1944-1946." [Clancy 53]

"At the end of 1944 [...] Woody signed a contract with Columbia records. He said later that he liked the sound the company's engineers got in Liederkrantz Hall in New York City [...] ." [Lees 108] Liederkrantz Hall was a "former church and had a very high ceiling." [Lees 108] The Columbia contract coincided with a change in the band's repertoire. The First Herd's music was heavily influenced by and . Its lively, swinging arrangements, combining bop themes with swing rhythm parts, were greatly admired. As of February, 1945 the personnel included , , (later replaced by ), , Davey Tough and . [Lees 109] On February 26, 1945 in New York City, the Woody Herman band recorded "Caldonia". [Clancy 68] "Ralph [Burns] caught [singing "Caldonia"] in an act and wrote the opening twelve bars and the eight bar tag." [Clancy 68] "But the most amazing thing on the record was a soaring eight bar passage by trumpets near the end." These eight measures have wrongly been attributed to a Dizzy Gillespie solo, but were in fact originally written by Neal Hefti. [Lees 109]

In 1946 the band won "Downbeat", "Metronome", "Billboard" and "Esquire" polls for best band, nominated by their peers in the big band business. [Clancy 90] Along with the high acclaim for their jazz and blues performances, classical composer wrote the "", one in a series of compositions commissioned by Woody with solo clarinet, for this band. Woody Herman would record this work in the at Bayside New York [Liner notes of the re-release by the Everest Recording Group Inc.] in 1959, and released in January 1959 as SDBR 3009. The recording has been released on a CD by Everest EVC 9049.

Woody Herman said about the "Concerto": "What we were doing then, the First Herd [...] were heavy, strong, jazz things, with lots of open brass and so forth [...] . [...] ["Ebony Concerto" is a] very delicate and a very sad piece." [Clancy 88] Stravinsky felt that the jazz musicians would have a hard time with the various time signatures. Saxophonist Flip Philips said "during the rehearsal [...] there was a passage I had to play there and I was playing it soft, and Stravinsky said 'Play it, here I am!' and I blew it louder and he threw me a kiss!'" [Clancy 89] "Ebony Concerto" opened March 25, 1946 at Carnegie Hall. [http://www.centerforjazzarts.org/classical_2c.html] Despite the Carnegie Hall success and other triumphs, Herman was forced to disband the orchestra in 1946 at the height of its success. This was his only financially successful band; he left it to spend more time with his wife and family. During this time, he and his family had just moved into the former Hollywood home of and . One reason Herman may have disbanded was his wife Charlotte's growing problems with alcoholism and pill addiction. " [After Woody Herman broke up his band] Charlotte joined Alcoholics Anonymous. [...] Charlotte gave up even wine [...] . [...] Woody said, laughing, 'I went to an AA meeting with Charlotte and my old band was sitting there.'" [Lees 147] Many critics cite December of 1946 as the actual date the big band era ended and eight other bands in addition to Herman's, called it quits. [Lees 147]

In 1947 Herman organized the Second Herd. This band was also known as "The Four Brothers Band". This derives from the song recorded December 27, 1947 for Columbia records, "Four Brothers", written by Jimmy Giuffre. [Clancy 120] "The 'Four Brothers' chart is based on the chord changes of 'Jeepers Creepers', and features the three-tenor, one-baritone saxophone section [...] ." [Clancy 121] The order of the saxophone solos is , , , and . [Clancy 121] Some of the notable musicians of this band were also , , Lou Levy, , , and . [ [http://music.yahoo.com/ar-251790-bio--] Yahoo Woody-Herman biography] Among this band's hits were "Early Autumn," and "The Goof and I".

Herman's other bands include the Third Herd (1950–1956) and various editions of the New Thundering Herd (1959–1987). [The [http://www.vervemusicgroup.com/artist.aspx?ob=per&src=prd&aid=2841 Verve Music Group website] biography is the source for all dates given here.] In the 1950s, the Third Herd went on a successful European tour. [Clancy 192] He was known for hiring the best young musicians and using their arrangements. His band's book in the sixties consequently came to be heavily influenced by . [Clancy 275] "In 1968 Woody started to use an electronic rhythm section with electric piano and bass, combined with the traditional big band instrumentation [...] producing the fusion of a rock beat with the timbre of horns." [Clancy 271] He was also known too feature brass and woodwind instruments not traditionally associated with jazz, such as the bassoon, oboe or French horn.

In 1974, Woody Herman and his "Young Thundering Herd" appeared with for his television special "The Main Event" and subsequent album, "". Both were recorded on October 13 1974 at in New York City. [Clancy 291] On November 20, 1976, a reconstituted Woody Herman band played at Carnegie Hall in New York City, celebrating Herman's fortieth anniversary as a bandleader. [Clancy 299] By the 1980s, Herman had returned to straight forward jazz, dropping some of the newer rock and fusion approaches. [Clancy 312-313] Circa 1980, Woody Herman signed a recording contract with Concord Records, now the Concord Music Group. [Wilson, 1981] On March 15, 1981, wrote in "" of one of Herman's first Concord recordings "Woody Herman Presents a Concord Jam, Vol. I": " [This recording] takes him back to the days before his high pressure First Herd of 1944 and 1945, to the more relaxed feeling of his original band of the late 1930s, 'the band that plays the blues [...] ."

Herman continued to perform into the 1980s, after the death of his wife and his health declining, chiefly to pay back taxes caused by an incompetent manager in the 1960s. " [In the mid nineteen-sixties] the Internal Revenue Service sent Woody a letter ordering him to appear in person in its office. He arrived with Abe [Turchen] . [...] He was handed a tax bill for $750,000. With interest and penalties, the amount was $1.6 million." [Lees 272] With the added stress, Herman still kept performing. In a December 5, 1985 review of the band at the Blue Note jazz club for "The New York Times", John S. Wilson pointed out: "In a one-hour set, Mr. Herman is able to show off his latest batch of young stars &mdash; the baritone saxophonist Mike Brignola, the bassist Bill Moring, the pianist Brad Williams, the trumpeter Ron Stout &mdash; and to remind listeners that one of his own basic charms is the dry humor with which he shouts the blues." Wilson also spoke about arrangements by and for special attention. Wilson spoke of the continuing influence of Duke Ellington on the Woody Herman bands from the nineteen forties to the nineteen eighties. [Wilson 1985]

Before his death in 1987 he delegated most of his duties to leader of the reed section, [http://www.franktiberi.com/bio.html] . Tiberi leads the current version of the Woody Herman orchestra. [http://www.internationaljazzproductions.com/whermanorchestra.html] Frank Tiberi said at the time of Herman's death "I wouldn't play anyone else's arrangements [...] We're going to remain with what [Woody Herman] was doing." [Clancy 397] Woody Herman's funeral and "Requiem Mass, conducted by Monsignor George J. Parnassus, began at 10 am on the morning of November 2, 1987 at St. Victor's Catholic Church, in West Hollywood [California] [...] ." [Lees 368]