Constantina (also named Constantia and Constantiana; b. after 307/before 317 - d. 354), and later known as Saint Constance, was the eldest daughter of Roman Emperor Constantine the Great and his second wife Fausta, daughter of Emperor Maximian. Constantina received the title of Augusta by her father, and is venerated as a saint, having developed a medieval legend wildly at variance with what is known of her actual character. In English she is also known as Saint Constance.[1] 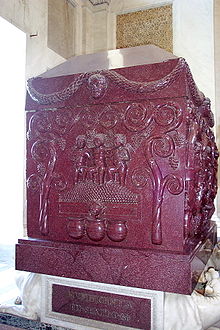 Sarcophagus of Constantina, sculpted around 340 AD. Formerly in the Mausoleo di Santa Costanza, part of the complex of Sant'Agnese fuori le mura in Rome, it is now on display at the Museo Pio-Clementino in the Vatican City.

In 335, Constantina married her cousin Hannibalianus, son of Flavius Dalmatius, whom Constantine had created "King of Kings and Ruler of the Pontic Tribes". After Emperor Constantine the Great died, great purges of the imperial family occurred and her husband was executed in 337.[2]

For the second time, Constantius II gave Constantina to Hannibalianus' and her own first cousin Gallus. Gallus was created a Caesar of the East and his name changed to Constantius Gallus to further his legitimacy around 349/350, which also presumably was the time of their marriage. Gallus was twenty-five or twenty-six at the time, whereas Constantina was substantially his senior. Her second marriage produced a daughter Anastasia, whose full name and fate are unknown.[3]

Constantina and Constantius Gallus were then sent from Rome to Syria at Antioch to govern that portion of the Eastern Roman Empire.[4] She would not return to Rome until her death. In 354 AD, When Constantius called for Gallus, the caesar sent Constantina to her brother, with the purpose to mitigate his position in Constantius' consideration. While on her way to meet with Constantius II, she died at Caeni Gallicani in Bithynia (Asia Minor). The cause of her death was a sudden high fever of unknown cause.[5] Her body was sent back to Rome and entombed near Via Nomentana in a mausoleum her father, Emperor Constantine I, had started building for her. This mausoleum would later become known as the church of Santa Costanza, when Constantia was venerated as saint. Her magnificent porphyry sarcophagus is on exhibit in the Vatican Museums.[6]

Upon marrying Hannibalianus her father made her Augusta but it was mostly an honorable title. After her husband was executed in 337 AD, Constantina disappeared from the imperial record until 350 AD. This is when Magnentius revolted against her brother Constantius II which caused great political upheaval. This prompted her to become directly involved in the political revolt. She exercised her political power by asking Vetranio to challenge Magnentius, thereby hoping to protect her own political interests and preserve her power.[4]

Not only did Constantia exercise political power on her own, she was inherently, as a female member of the imperial Roman family, a political tool. As a widow, she could be offered in marriage to secure political alliance. This happened twice. In 350 AD, in order to attempt a peaceful compromise by arraigning marriage, Magnentius offered to marry Constantia and have Constantius II marry his daughter.[7] But Constantius II refused this offer. Shortly after, in 351 AD, Constantius II used Constantia for a different political purpose and gave her in marriage to Constantius Gallus who was made Caesar in the Eastern Roman Empire and they moved to Antioch.[4]

The Passio Artemii (12) alleges that the marriage was meant to ensure Gallus' loyalty[8] but it may have had at least as much to do with Constantina who, besides having known power as Constantine's daughter and Hannibalianus' wife, had prompted the opposition of Vetranio [9] to Magnentius, and whose hand had been sought from Constantius by ambassadors of Magnentius himself.[10]

The marriage, besides benefiting Constantius, extricated her from a dangerous situation in the Roman Empire and placed her in a position from which she might control the younger and inexperienced Caesar. On the other hand, it is possible that Constantius saw the marriage as a way to remove his intrusive — perhaps treasonous — sister from the volatile west. If the mention in the Passio Artemii (11) of letters from Constantina to her brother preserves a genuine tradition, it is possible Constantina even initiated the proposal that she marry Gallus.

Gallus ruled over the East from Antioch, and his purpose was to keep under control the Sassanid menace. Gallus, however, alienated the support of his subjects with his arbitrary and merciless rule. Constantina supported her husband. It is in Antioch that Constantina appeared to become politically active in the way typical of imperial roman women. According to Ammianus, she appears much like Theodora, sinister and cruel, somewhat hidden but still powerfully controlling. He suggests that she even called for the murder of several people, "Gallus...had just enough strength to reply that most of them had been massacred at the insistence of his wife Constantina".[11] While this can not be proven, it does give her character the perception of being cruel and violent.

When, after receiving the complaints of the Anthiocheans, Constantius II summoned both Gallus and Constantina, but according to Ammianus Constantina tried to go to him first alone in the hope that their familiar ties would help ease tensions, "she set out in the hope that as he was her brother she would be able to soften him".[12] In her last attempt at using her political power, Constantina went to try to meet with her brother the Emperor to try to pacify him in his conflict with her husband Constantius Gallus.

Edward Gibbon likened Constantina to one of the internal furies tormented with an insatiate thirst of human blood. The historian said that she encouraged the violent nature of Gallus rather than persuading him to show reason and compassion. Gibbon stated that her vanity was accentuated while the gentle qualities of a woman were absent in her makeup. She would have accepted a pearl necklace in return for consenting to the execution of a worthy nobleman.[13]

According to Ammianus Marcellinus, Constantina appeared to be extremely cruel and violent. He portrayed her as incredibly full of pride and disturbingly violent, "her pride was swollen beyond measure; she was a Fury in mortal form, incessantly adding fuel to her husband's rage, and as thirsty for human blood as he".[5]

In the Middle Ages, Constantina developed a legend, connected with the life of Saint Agnes; the origins of this are unclear, though she was certainly buried in a mausoleum, Santa Costanza, attached to the large Constantinian basilica over the catacomb where Agnes was believed to be buried. The mausoleum survives largely intact, but now only parts of the wall of the basilica survive. In the version told by the Golden Legend, she caught leprosy, and was then miraculously cured when praying at Agnes' tomb, which is supposed to be at the site of the later Basilica of Sant'Agnese fuori le mura alongside the earlier basilica. Costantina took a vow of chastity, and converted her fiancé Gallicanus, and eventually left her wealth to her servants John and Paul for them to spend on Christian works. The story, with considerable elaborations, survives in various literary forms, and as a figure from the life of Saint Agnes, Constantina appears in the late 14th enamelled scenes on the Royal Gold Cup in the British Museum.[14]