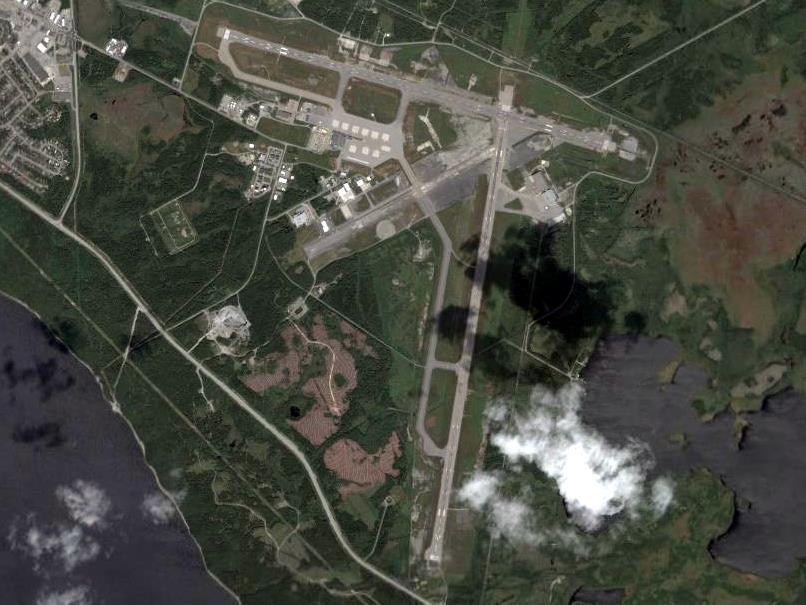 Canadian Forces Base Gander (also CFB Gander), is a located in Gander, . It is operated as an air force base by and is home to air/marine search and rescue operations that cover a vast swath of the western North Atlantic and southern Arctic. Its primary lodger unit is 9 Wing.

CFB Gander is co-located at .

The Newfoundland Airport was established by the in 1936 and it became a strategically important airfield for piston-engined aircraft in the late 1930s.

Shortly after was declared, the Government of Newfoundland turned the operation of the airfield over to the (RCAF) in 1940, which had been tasked by the the responsibility to provide aerial defence for the dominion. The No. 10 Bomber and Reconnaissance (BR) Squadron began operating from the airfield, flying s and later, Liberators with responsibility to protect supply convoys in the North Atlantic from enemy U-boats.

The airfield was renamed RCAF Station Gander in 1941 and it became heavily used by Ferry Command for transporting military aircraft from Canada and the United States to the European theatre. By 1943, Gander was the largest RCAF station in the world (in terms of physical size) and the maintained a strong presence at the airfield, providing anti-aircraft and airfield defense.

The RCAF handed operation of the airfield back to the Government of Newfoundland in March 1946 and removed its presence at what was promptly renamed Gander Airport (it was later upgraded to international status), although the RCN's radio monitoring station remained in operation. The airfield was taken over by Canada's federal government under the Department of Transport in 1949 after Newfoundland became Canada's tenth province. Facilities and runways were enlarged and modified for larger aircraft.

In the early 1950s, the RCAF and (USAF) constructed an aircraft early warning radar station near the airfield as part of the . This new radar station took up the retired name RCAF Station Gander and the 226 Aircraft Control and Warning (AC&W) squadron was established to operate it. In 1966 the RCAF's No. 226 AC&W began administering the RCN's Naval Radio Station Gander as well.

In 1970 a new expanded communications monitoring facility was constructed for Communications Command, replacing Naval Radio Station Gander in 1971. CFS Gander's Pinetree Line radar and its new communications facilities provided support to fighter-interceptors operating from and with the .

In 1977, Gander saw its first military flying unit return to the area since the war when a detachment of 424 Squadron, flying helicopters moved to CFS Gander to provide (SAR) operations (this being in response to Canada declaring its 200 nautical mile offshore, resulting in increased Canadian fishing activities). Having found a permanent home at Gander, the SAR helicopters were no longer a 424 Squadron detachment and a new unit identifier was required. Thus, in May 1977, 103 Rescue Unit (RU) was reactivated at Gander. Air Command (AIRCOM) also regained control of CFS Gander from Communications Command in May 1977, although Communications Command continued to operate the radio intercept facility. 103 Squadron was housed in a separate facility constructed some distance from the civilian airfield terminal.

By 1984 CFS Gander was the largest Canadian Forces Station in the Canadian Forces. Because Gander was such a large establishment and because 103 Rescue Unit had such a high profile with its ocean rescue mission, the station was officially upgraded to a , becoming Canadian Forces Base Gander or CFB Gander in March 1984.

During the early 1990s the federal government began to cut back on its defence budget, resulting in numerous base closures across Canada. AIRCOM units were consolidated into wings in April 1993, which became the high level "lodger unit" at Canadian Forces Bases which operated as air force bases. Thus while the actual base is known as CFB Gander, its primary lodger unit (or operational unit) is 9 Wing, frequently referred to as 9 Wing Gander.

Among its many roles, 9 Wing Gander is responsible for providing search and rescue services throughout Newfoundland and , northeastern , the eastern and offshore waters of these regions. Crews of 103 Search and Rescue Squadron are on 24-hour standby, ready to answer the call in one of the busiest search and rescue regions in Canada.

9 Wing includes the 9 Air Reserve Augmentation Flight. It augments and support the operations, administrative and technical functions of the base. Its Airfield Engineers Flight provides trained engineer reservists from various trades to support and deployments worldwide.

CFB Gander is also host to the Lietrim Detachment which operates and maintains signals intelligence. 9 Wing Telecommunications provides all military air units at Gander with message transmission and reception services.