Shipping
This article is about the transport of cargo by any means. For other uses, see Shipping (disambiguation).

The Panama Canal. A cargo ship transiting the Gatún locks northbound is guided carefully between lock chambers by "mules" on the lock walls to either side.

Shipping has multiple meanings. It can be a physical process of transporting commodities and merchandise goods and cargo, by land, air, and sea. It also can describe the movement of objects by ship.

Land or "ground" shipping can be by train or by truck. In air and sea shipments, ground transportation is required to take the cargo from its place of origin to the airport or seaport and then to its destination because it is not always possible to establish a production facility near ports due to limited coastlines of countries. Ground transportation is typically more affordable than air shipments, but more expensive than shipping by sea especially in developing countries like India, where Inland infrastructure is not efficient.

Shipment of cargo by trucks, directly from the shipper's place to the destination, is known as a door to door shipment and more commonly multimodal transport system. Trucks and trains make deliveries to sea ports and air ports where cargo is moved in bulk.

Much shipping is done aboard actual ships. An individual nation's fleet and the people that crew it are referred to its merchant navy or merchant marine. Merchant shipping is lifeblood to the world economy, carrying 90% of international trade with 102,194 commercial ships worldwide. The term shipping in this context originated from the shipping trade of wind power ships, and has come to refer to the delivery of cargo and parcels of any size above the common mail of letters and postcards. 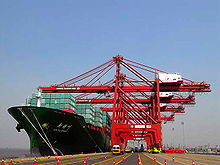