Martov was originally a close colleague of Lenin and with him founded the League of Struggle for the Emancipation of the Working Class in 1895.[1] Both were exiled to Siberia for this but Martov was sent to Turukhansk in the Arctic while Lenin was sent to the comparatively warm 'Siberian Italy'. This was because Martov was Jewish while Lenin was a nobleman.[2] Forced to leave Russia and with other radical political figures living in exile, Martov joined the Russian Social Democratic Labour Party (RSDLP) and, in 1900, was one on the founding members, with Lenin, of the party journal Iskra.[3] At the Second Congress of the RSDLP in London in 1903, there was a dispute between Martov and Vladimir Lenin over who was to be considered a member of the RSDLP. Lenin had published his ideas for moving the party forward in his pamphlet What is to be Done?, which was considered to be a document putting forward the views of the entire Iskra group led by Lenin and Martov. However, in the London Congress of the party differing definitions of party membership were put forward by the two men, with Lenin arguing for a restricted membership of fully committed cadre while Martov argued for a looser interpretation of membership.

Both Martov and Lenin based their ideas for party organization on those prevailing in the European Social Democratic parties, in particular that of Germany. When the vote was taken on the disputed question, the group led by Lenin lost and split. However, they were referred to as Bolsheviks throughout the Congress and subsequently as they had won a vote to determine the composition of the Iskra editorial board, hence their adoption of the name Bolshevik which literally means 'person of the majority'. The minority or Menshevik faction adopted that title. Ironically, the vote on the editorial board was not seen as important by any of the disputants at the time, and in fact the Bolsheviks were generally in a minority but some delegates had not been present for the crucial vote who would otherwise have voted for the Mensheviks. 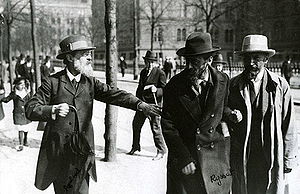 Leaders of the Menshevik Party at Norra Bantorget in Stockholm, Sweden, May 1917. Pavel Axelrod, Julius Martov and Alexander Martinov

Martov became one of the outstanding Menshevik leaders along with George Plekhanov, Fedor Dan and Irakli Tsereteli. Leon Trotsky too was a member of the Menshevik faction for a brief period but soon broke with them.

After the reforms brought about by the 1905 Revolution, Martov argued that it was the role of revolutionaries to provide a militant opposition to the new bourgeois government. He advocated the joining together of a network of organisations, trade unions, cooperatives, village councils and soviets, to harass the bourgeois government until the economic and social conditions made it possible for a socialist revolution to take place.

Martov was always to be found on the left wing of the Menshevik faction and supported the reunification with the Bolsheviks in 1905. That fragile unity was short lived, however, and by 1907 the two factions had again split in two. In 1911 Martov notably wrote the pamphlet "Spasiteli ili uprazdniteli? Kto i kak razrushal R.S.-D.R.P.," "Saviours or destroyers? Who destroyed the RSDLP and how", which denounced the Bolsheviks for among other things, raising money by "expropriations," that is, robbing banks.[4] This pamphlet was denounced by both Kautsky and Lenin.

In 1914 Martov opposed the First World War, which he viewed as an imperialist war in terms very similar to those of Lenin and Trotsky. He therefore became the central leader of the Menshevik Internationalist faction which organized in opposition to the Menshevik Party leadership. In 1915, he sided with Lenin at an international conference in Switzerland, but later repudiated the Bolsheviks.[5]

After the February Revolution in 1917, Martov returned to Russia but was too late to stop some Mensheviks joining the Provisional Government. He strongly criticized those Mensheviks such as Irakli Tsereteli and Fedor Dan who, now part of Russia's government, supported the war effort. However, at a conference held on June 18, 1917, he failed to gain the support of the delegates for a policy of immediate peace negotiations with the Central Powers.

When the Bolsheviks came to power as a result of the October Revolution in 1917, Martov became politically marginalised. This is best exemplified by Trotsky's comment to him and other party members as they left the first meeting of the council of Soviets after October 25, 1917 in disgust at the way in which the Bolsheviks had seized political power: "You are pitiful isolated individuals; you are bankrupts; your role is played out. Go where you belong from now on — into the dustbin of history!". Martov silently walked away without looking back. He paused at the exit seeing a young Bolshevik worker wearing a black shirt with a broad leather belt, standing in the shadow of the portico. The young man turned on Martov with unconcealed bitterness: 'And we amongst ourselves had thought, Martov would at least remain with us.' Martov stopped and with a characteristic movement tossed up his head to emphasize his reply: 'One day you will understand the crime in which you are taking part.' Waving his hand wearily he left the hall.[citation needed]

For a while Martov led the small Menshevik opposition group in the Constituent Assembly until the Bolsheviks abolished it. On one occasion a factory section chose Martov as their delegate ahead of Lenin in a soviet election. Shortly afterwards the factory found its supplies reduced.[6]

The Mensheviks were banned along with other political parties (except for the Bolshevik led Communist Party of the Soviet Union) by the Soviet government during the Russian Civil War.

Martov supported the Red Army against the White Army during the Civil War; however, he continued to denounce the persecution of liberal newspapers, the Cadets and the Socialist-Revolutionaries.

Speaking of the Red Terror, Martov said, "The beast has licked hot human blood. The man-killing machine is brought into motion... But blood breeds blood... We witness the growth of the bitterness of the civil war, the growing bestiality of men engaged in it."[7]

In 1920 Martov was allowed to travel legally to Germany. He had not intended to stay in exile in Germany, and only did so because of the repression by the ruling Communist Party in Russia of the Russian Social Democratic Workers Party. He died in Schömberg, Germany three years later. In the period before his last fatal illness, however, he was able to launch the newspaper Socialist Messenger which remained the publication of the Mensheviks in exile in Berlin, Paris and eventually in New York until the last of them had died. It has been rumoured that Lenin, also on his deathbed at the time, provided funds for this last venture of Martov.[8]