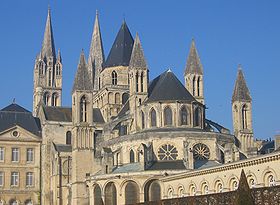 The Abbaye aux Hommes ("Men's Abbey") is a former abbey church in the French city of Caen, Normandy. Dedicated to Saint Stephen ("Saint Étienne"), it is considered, along with the neighbouring Abbaye aux Dames ("Lady's Abbey"), to be one of the most notable Romanesque buildings in Normandy. Like all the major abbeys in Normandy, it was Benedictine. Lanfranc, before being archbishop of Canterbury, was the abbot of Saint-Etienne.

Built in Caen stone during the 11th century, the two semi-completed churches stood for many decades in competition. An important feature added to both churches in about 1120 was the ribbed vault, used for the first time in France. The two abbey churches are considered forerunners of the Gothic. The original Romanesque apse was replaced in 1166 by an early Gothic chevet, complete with rosette windows and flying buttresses. Nine towers and spires were added in the 13th century. The interior vaulting shows a similar progression, beginning with early sexpartite vaulting (using circular ribs) in the nave and progressing to quadipartite vaults (using pointed ribs) in the sanctuary.

The two monasteries were finally donated by William the Conqueror and his wife, Matilda of Flanders, as penalty for their marriage against the Pope's ruling. William was buried here; Matilda was buried in the Abbaye aux Dames. Unfortunately William's original tombstone of black marble, the same kind as Matilda's in the Abbaye aux Dames, was destroyed by the Calvinist iconoclasts in the 16th century and his bones scattered.

As a consequence of the Wars of Religion, the high lantern tower in the middle of the church collapsed and was never rebuilt.

The Benedictine abbey was suppressed during the French Revolution and the abbey church became a parish church.

From 1804 to 1961, the abbey buildings accommodated a prestigious high school, the Lycée Malherbe. During the Normandy Landings, inhabitants of Caen found refuge in the church; on the rooftop there was a red cross, made with blood on a sheet, to show that it was a hospital (to avoid bombings).