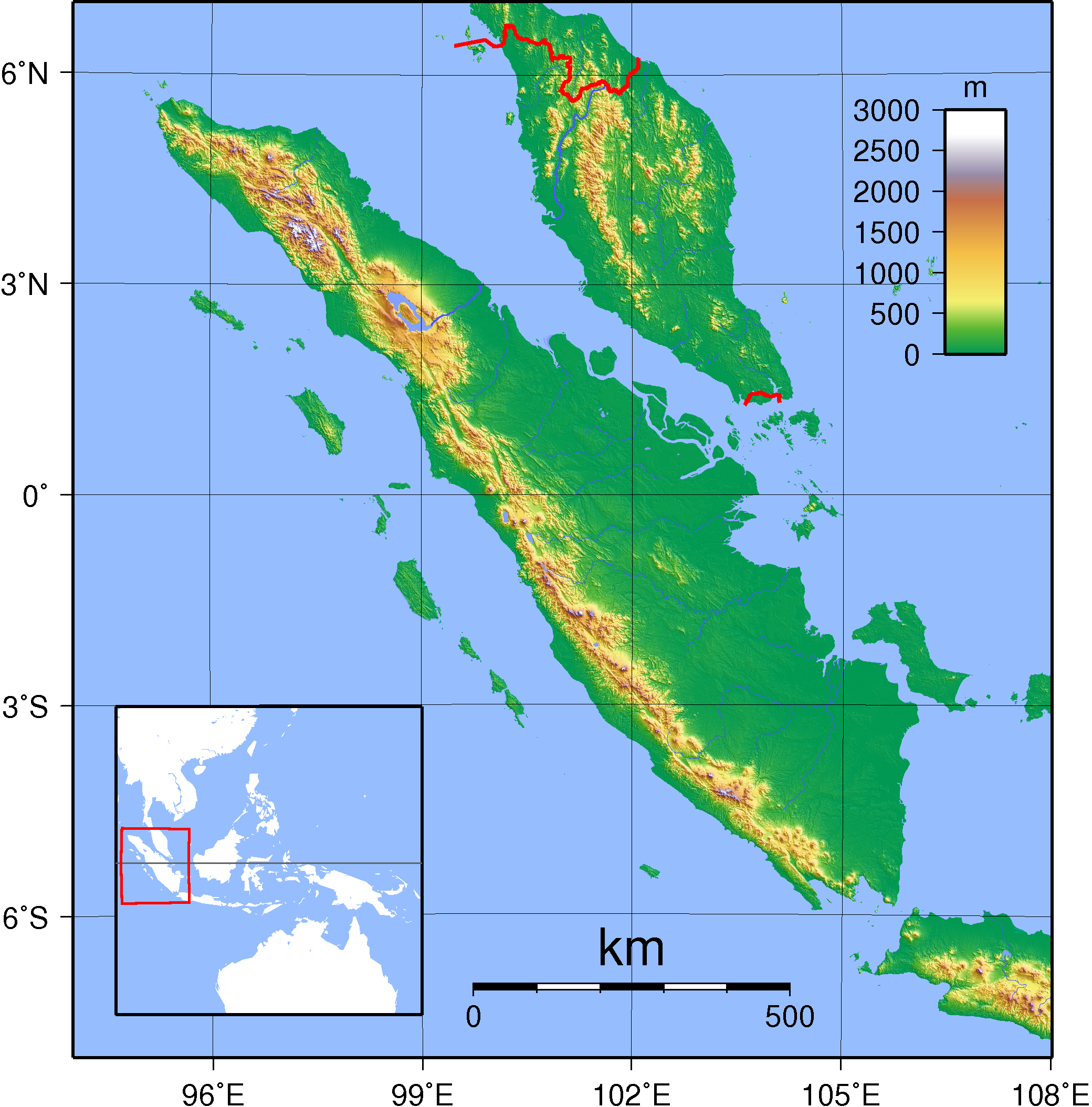 Sumatra (also spelled Sumatera) is the sixth largest island in the world (approximately 470,000 km²) and is the largest island entirely in (two larger islands, and , are partially in Indonesia).

Sumatra was known in ancient times by the names of "Swarnadwīpa" ("Island of Gold") and "Swarnabhūmi" ("Land of Gold"), due likely to the deposits of the island's highlands. [cite book|title=A Kingdom of Words: Language and Power in Sumatra|last=Drakard|first=Jane|publisher=Oxford University Press|date=1999|isbn=983560035X] Arab geographers referred to the island as "Lamri" (Lamuri, Lambri or Ramni) in the 10-13th centuries, in reference to a kingdom near modern day which was the first landfall for traders. Late in the 14th century the name Sumatra became popular, in reference to the kingdom of Samudra which was a rising power. European writers in the 19th century found that the indigenous inhabitants did not have a name for the island. [cite book| title=An Indonesian Frontier: Acehnese and Other Histories of Sumatra| last=Reid| first=Anthony| isbn=9971692988| date=2005 |publisher=National University of Singapore Press]

People who spoke first arrived in Sumatra around 500 BCE, as part of the from Taiwan to Southeast Asia. With its location in the - sea trade route, several trading towns flourished, especially in the eastern coast, and were influenced by Indian religions. One of the earliest known kingdoms was , which flourished in the 5th century AD in southern Sumatra. Kantoli was replaced by the Empire of and then later by the Kingdom of . Srivijaya was a Buddhist monarchy centered in what is now . Dominating the region through trade and conquest throughout the 7th to 9th centuries, the Empire helped spread the Malay culture throughout Sumatra, Malay Peninsula, and western Borneo. The empire was a , or maritime power that extended its influence from island to island. Palembang was a center for scholarly learning, and it was there the Chinese Buddhist pilgrim I Ching studied Sanskrit in 671 CE before departing for India. On his journey to China he spent four years in Palembang translating Buddhist texts and writing two manuscripts.

Srivijayan influence waned in the 11th century after it was defeated by the Empire of southern India. Sumatra was then subject to conquests from nese kingdoms, first and subsequently . At the same time Islam made its way to Sumatra, spreading through contacts with Arabs and Indian traders.

By the late 13th century, the monarch of the Samudra kingdom had converted to Islam. visited the island in 1292 and visited twice during 1345-1346. Samudra was succeeded by the powerful , which survived to the 20th century. With the coming of the Dutch, the many Sumatran princely states gradually fell under their control. Aceh, in the north, was the major obstacle, as the Dutch were involved in the long and costly (1870-1905).

On , the western coast and islands of Sumatra, particularly province, were devastated by a nearly 15 meter high following the 9.2-magnitude Indian Ocean earthquake. The death toll surpassed 170,000 in Indonesia alone, primarily in Aceh.

In 2005 there was an 8.7 magnitude aftershock of the previous earthquake in December 2004. See . In addition to the off the west coast, Sunda arc, the Great Sumatran Fault, a , runs the entire length of the island. The pressure on this fault increased dramatically after the December 2004 earthquake, and seismologists are afraid an is going to occur soon. The fault ends directly below the devastated city of .

The longest axis of the runs approximately 1,790 km (1,100 miles) northwest - southeast, crossing the near the center. At its widest point the island spans 435 km (270 miles). The interior of the island is dominated by two geographical regions: the in the west and swampy plains in the east.

The backbone of the island is the Barisan mountains chain, with the active volcano 's 3,805 m (12,467 ft) the highest point, located at about the midpoint of the range. The volcanic activity of this region endowed the region with fertile land and beautiful sceneries, for instance around the . It also contains deposits of coal and gold.

To the east, big rivers carry silt from the mountain, forming the vast lowland interspersed by swamps. Even if mostly unsuitable for farming, the area is currently of great economic importance for Indonesia. It produces from both above and below the soil&mdash;palm oil and .

Sumatra is the largest producer of . Small-holders grow Arabica coffee () in the highlands, while Robusta () is found in the low lands. Arabica coffee from the regions of Gayo, Lintong and Sidikilang is typically processed using the (wet hulling) technique, which gives it a heavy body and low acidity. [ (2008): [http://www.sca-indo.org/arabica-regions/index.cfm?rid=1] , Retrieved ]

Most of Sumatra used to be covered by , but economic development coupled with corruption and illegal logging has severely threatened its existence. Conservation areas have not been spared from destruction, either.

The island is the world's 5th highest island, although only the third highest in the Indonesian archipelago.

Sumatra supports a wide range of vegetation types which are home to a rich variety of species, including 17 endemic genera of plants.

The major threats to Sumatran forest are the and expansion of plantations.

The island includes more than 10 National Parks, including 3 which are listed as the "" &mdash;, and .

Sumatra is not very densely populated, about 96 people per km²&mdash;more than 45 million people in total. It is nonetheless the fifth most populous island in the world. The most populous regions include most of North Sumatra and central highlands in West Sumatra, while the major urban centers are Medan and Palembang.

The people composed of many different ethnic groups, speaking 52 different languages. Most of these groups, however, share many similar traditions and the different tongues are closely related. Malay-speaking people dominate the eastern coast, while people in the southern and central interior speak languages related to Malay, such as the Lampung and people. The highland of northern Sumatra is inhabited by the Bataks, while the northernmost coast is dominated by . Ethnic Chinese minorities are also present in urban centers.

A majority of people in Sumatra are s (87%), while 10% are , 2% are and 1% . [cite web |title=Number of Population by Religion Year 2005 |url=http://www.depag.go.id/index.php?menu=page&pageid=17] Most central Bataks are Protestant Christians&mdash;a religion introduced by , a German.