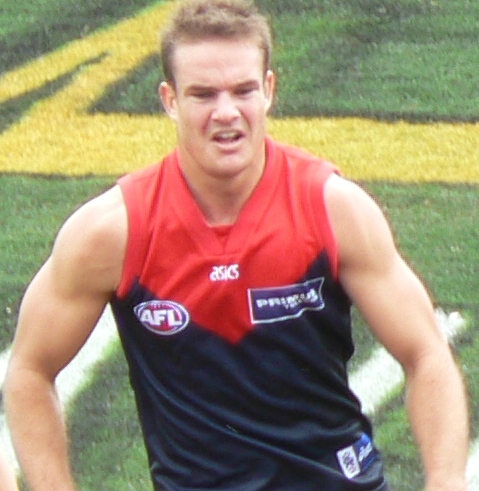 A natural sportsman, Green played representative and as a teenager. During his early soccer playing days as a teenager he was scouted by . After spending a month at Old Trafford, the 15-year-old Green trained with Walsall, a lower division English club, and was offered a contract but turned it down, choosing to finish his schooling in . Surprisingly Green only began playing Australian Rules seriously in his mid teens - after returning from - but his talent was obvious. Green decided to focus his sporting attention on the local game and was subsequently drafted to Melbourne and making his AFL debut in 2000.

After working his way into a greater role in the midfield in 2004, Green found plenty of the ball both forward and through the midfield in 2005. His penetrating and very accurate left foot kicking was effective to leading forwards or in front of goals. He often sets up Melbourne's marking forwards. He played in 21 of a possible 23 games in 2005, consolidating himself as an integral part of the Demons outfit in 2006 with consistent displays in the midfield and excelling as part of the leadership group. Green wears the number 18 guernsey for Melbourne.

Described as a "soft" player early in his career, Green noticeably toughened himself up late in 2006, attacking the football with renewed vigour and courage. This resulted in him taking a higher number of contested marks in 2007. In the 2007 season, he played very good football both in defence, the midfield, and in the forward line. Green continued his solid form into the 2008 season, being one of Melbourne's few highlights in a miserable season. It took time for Green to decide if he wanted to go on and play with the Demons in 2009 but eventually signed a contract and agreeing to stay red and blue for another 3 years.