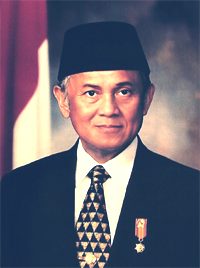 Bacharuddin Jusuf Habibie (born , ), more commonly known simply as Rudi Habibie or B J Habibie, was the third , holding office from 1998 to 1999.

In 1950, when Habibie was fourteen, he became acquainted with . The future Indonesian President was then stationed in to put down a separatist rebellion and lived in a house across the road from the Habibie family's. Suharto quickly became a family friend. He was present during the death of Habibie's father and became an intermediary when one of his soldiers wanted to marry Habibie's sister [cite book |last= Elson |first= Robert |title= Suharto: A Political Biography |origyear= 2001 |publisher= The Press Syndicate of the University of Cambridge |location= UK |language= |id=ISBN 0-521-77326-1 |pages= p. 48 ] .

During 1955-1965, he studied at the , , receiving Diploma (Germany's First degree certificate which is equivalent to Master in most countries) in 1960 and doctorate in 1965. He then worked for in . It might have been due to his time spent in Europe that made him interested in the Leica line of cameras.

Minister of Technology and Research

In 1974, Suharto sent to Germany to meet Habibie and convince him to come back to Indonesia. Habibie was convinced and returned to Indonesia, taking the position of Technological Adviser to the President.

From 1978 to 1998 Habibie served as Minister of Technology and Research in Suharto's Cabinet. He pushed for a "leapfrog strategy of development", which he hoped would bypass the foundational low-skill technology stages to turn Indonesia into an industrialized nation. Despite national and international opposition (which preferred agricultural investments to technological investments) to this;he once famously announced that "I have some figures which compare the cost of one kilo of airplane compared to one kilo of rice. One kilo of airplane costs thirty thousand US dollars and one kilo of rice is seven cents. And if you want to pay for your one kilo of high-tech products with a kilo of rice, I don't think we have enough. [cite web
last = Head
first = Jonathan
title = Indonesia: BJ Habibie Profile
publisher = BBC
date = 20th February 1998
url = http://news.bbc.co.uk/1/hi/world/analysis/58602.stm
accessdate = 2006-10-30 ] ."

Habibie had considerable power as Minister of Technology. His long acquaintance with Suharto combined with Suharto's own desire that Indonesia master technology as part of its development meant that Habibie was able to get extra fundings from the budget for his projects at the expense of other ministers' project. In 1989, Suharto increased Habibie's power, putting him in charge of strategic industries.

When Habibie came back to Indonesia in 1974, he was also made of a new called PT. Nurtanio. By the early 1980s it had made considerable progress, specializing in making helicopters and small passenger planes. In 1995, Habibie succeeded in flying a N-250 (dubbed Gatotkoco) commuter plane.

In developing Indonesia's Aviation Industry, Habibie adopted an approach called "Begin at the End and End at the Beginning" [cite web
title = Our History
publisher = Indonesian Aerospace
url = http://www.indonesian-aerospace.com/history/
accessdate = 2006-10-30 ] . In this method, things such as basic research became the last things that the workers at IPTN focused on while actual manufacturing of the planes was placed as the first objective.

In 1985, PT. Nurtanio changed its name to Indonesian Aviation Industry (IPTN) and is now known as Indonesian Aerospace Inc. (Dirgantara).

By the late 80's, it became apparent that there was a rift between Suharto and his main political ally, . Suharto, who had repressed Islamists in the earlier years of his regime now began to make concilliatory gestures in a bid to build a new power base to compensate the one he was losing with ABRI.

In December 1990, the ICMI was formed with Habibie as its Chairman. In Suharto's eyes, ICMI would become his main weapon in appealing to the Muslim society. ICMI was a successful venture, by 1994, it had 20,000 members including future political opponents such as and [cite book |last= Elson |first= Robert |title= Suharto: A Political Biography |origyear= 2001 |publisher= The Press Syndicate of the University of Cambridge |location= UK |language= |id=ISBN 0-521-77326-1 |pages= p. 269 ] .

Habibie served as Chairman of ICMI for 10 years.

Like all Government officials in Suharto's regime, Habibie was a member of .

From 1993-1998, Habibie was a Daily Coordinator for the Chairman of the Executive Board.

The 1998 People's Consultative Assembly (MPR) General Session was to be held in the midst of the and many were hoping for Suharto to take serious steps to take the country out of trouble. In January 1998, after accepting nomination for a 7th term as President, Suharto announced the criteria for the person who he wanted as Vice President. Suharto did not mention Habibie by name but his suggestion that the next Vice President should have mastery over science and technology made it obvious who he wanted to nominate [cite web
title = Delapan Calon Wapres Itu: Di Antara Pujian dan Kritik
publisher = Tempo
date = 7th February 1998
url = http://www.tempointeraktif.com/ang/min/02/49/utama.htm
accessdate = 2006-10-30 ] . The market reacted badly, causing the to further depreciate in value.

By May 1998, the increasing poverty caused by the Financial Crisis and political discontent had reached boiling point. On 13th May, the shooting of six students at in Jakarta, caused extreme anger which in turn caused widespread riots and lootings. There were now explicit calls for Suharto to step down as President of Indonesia. Suharto responded by saying on that if he stepped down, the Vice President would become President and in a not too subtle jab to Habibie, said that he was not sure whether the Vice President could solve the problems facing the country [cite book |last= Elson |first= Robert |title= Suharto: A Political Biography |origyear= 2001 |publisher= The Press Syndicate of the University of Cambridge |location= UK |language= |id=ISBN 0-521-77326-1 |pages= p. 291 ] .

Habibie, who learned of Suharto's comments from television, was upset with his mentor and from then on was increasingly sympathetic to those who wanted Suharto to step down. While careful not to oppose him directly or support those who did, Habibie left the president in little doubt that he saw himself as Suharto's legitimate successor. Suharto, faced with dwindling civilian and military support, even among loyalists like and , decided to resign late on the evening of . [cite book |last= Hafidz|first= Tatik S.|title= Fading away? : the political role of the army in Indonesia’s transition to democracy, 1998-2001 |origyear= 2006 |publisher= Institute of Defence and Strategic Studies|location= Singapore |language= |id=ISBN 981054085X |pages= p. 43 ]

The next morning, on , Suharto publicly announced his resignation and Habibie was immediately sworn in as President. There was mixed reaction to Habibie's assumption of the Presidency. Hardline reformists saw Habibie as an extension of Suharto's regime while moderate reformists saw him as leading a transitional Government.

With the release of his 2006 book, "Detik-Detik Yang Menentukan: Jalan Panjang Indonesia Menuju Demokrasi" (Decisive Moments: Indonesia's Long Road Towards Democracy), there is speculation that Suharto had wanted Habibie to resign along with him. [cite web
last = Bayuni
first = Endy M.
title = How Soeharto schemed and Habibie botched it
publisher = Jakarta Post (Original Publisher) as displayed on perspektif.net
date = 9th October 2006
url = http://www.perspektif.net/english/article.php?article_id=428
accessdate = 2006-10-30 ] In Javanese style, Suharto hinted at this intention subtly. Habibie, who isn't Javanese, didn't take the hint and decided to take the office of the President. Because of this inability to read his intentions, Suharto showed nothing but contempt and never talked to Habibie again.

Habibie's Cabinet, which was called the consisted mostly of the same faces which had served in Suharto's last Cabinet. To show his reformist bent, Habibie included (PPP) member in the Cabinet.

When he took office, Habibie made it clear that East Timorese Independence was out of the question, but that he would consider giving East Timor special autonomy. In January 1999, however, Habibie surprised everyone by announcing that a , choosing between special autonomy and independence, would be held in East Timor. This particular decision made Habibie extremely unpopular with ABRI.

On 30th August 1999, the referendum was held and the East Timorese people chose overwhelmingly for Independence. However, the retreat of Indonesian troops from East Timor would not be peaceful as many were killed by Pro-Indonesian para-militaries.

The 1998 MPR Special Session in November declared that an investigation should be made into corruption charges especially that of Suharto's.

Habibie also thought of forming a special commission as a gesture of good faith towards and invited noted lawyer to be on the commission. Nasution would ask for a lot of power in investigating the matter and Habibie rejected the offer. Instead, he appointed and loyalist, to head the investigation.

On 9th December 1998, Suharto was questioned for three hours by Ghalib. The Habibie Government declared that Suharto had not gained his wealth by corruption.

A controversial tape was released which involved a telephone conversation between Habibie and Ghalib. The conversation seemed to suggest that Habibie's Government was not giving a serious attempt at investigating Suharto's corruption charges [cite book |last= Elson |first= Robert |title= Suharto: A Political Biography |origyear= 2001 |publisher= The Press Syndicate of the University of Cambridge |location= UK |language= |id=ISBN 0-521-77326-1 |pages= p. 295 ] .

Habibie's Government also began making concilliatory gestures towards s who because of their wealth and dominance of the Indonesian economy were targeted during the violence and looting. In September 1998, Habibie issued a Presidential Instruction which does not allow for the discriminatorial reference to "pribumi" (Native) and "non-pribumi" (Non-Native) [cite book |last= Purdey |first= Jemma |title= Anti-Chinese Violence in Indonesia, 1996-1999 |origyear= 2006 |publisher= Singapore University Press |location= Singapore |language= |id=ISBN 9971-69-332-1 |pages= p. 179 ] . In May 1999, Habibie followed this up with another Presidential Instruction which states that a display of ID Card is enough to prove someone's Indonesian citizenship whereas before, displaying the Letter of Evidence of Republic of Indonesia Citizenship (SBKRI) was the norm.

Although they were not mentioned specifically, it is clear that these policies were targeted towards Chinese Indonesians who in the Suharto years were referred to as non-Pribumi and had to display SBKRI to prove their Indonesian citizenship.

Habibie also proposed banning Indonesians from studying abroad, despite himself having been educated abroad, and his son enrolled in a university abroad during the time he flirted with the idea.

Although he had been viewed as just leading a transitional Government, Habibie seemed determined to continue as President. In May 1999, Golkar announced that Habibie would be their Presidential candidate.

At the 1999 MPR General Session in October, Habibie delivered an accountability speech, which was a report of what he had achieved during his Presidency. Once this was completed, the MPR members began voting to decide if they would accept or reject Habibie's speech. During this process, pro-Reform members of Golkar broke with the ranks and voted against Habibie and the accountability speech was rejected with 355 votes to 322. Seeing that it would be unethical to go for the Presidency after having his accountability speech rejected, Habibie withdrew his nomination.

Since relinquishing the presidency, Habibie has spent more time in Germany than in Indonesia.

In September 2006, Habibie released a book called "Detik-Detik Yang Menentukan: Jalan Panjang Indonesia Menuju Demokrasi" (Decisive Moments: Indonesia's Long Road Towards Democracy). The book recalled the events of May 1998 which led to his rise to the Presidency. In the book, he controversially accused , Suharto's son-in-law and the Commander in May 1998, of planning a against him.

Habibie is married to Hasri Ainun with whom he had two sons, both of them are married and give Habibie grand children. Habibie's father was from Sulawesi (Celebes) but his mother was Javanese from Central Java. His brother, Yunus Habibie, is the current Indonesian ambassador to the Netherlands.

* [http://web.archive.org/web/*/habibie.ristek.go.id/ Archived version of Habibie's homepage while he served as the State Minister of Research and Technology]