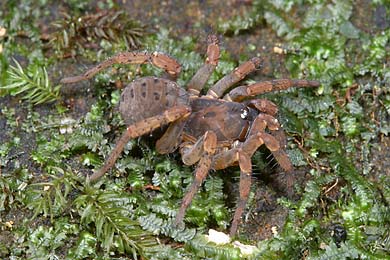 
The spider family Liphistiidae comprises 5 genera and 85 [Platnick 2008] from , , and . They are among the most basal living s, belonging to the suborder . In , the ("Heptathela kimurai") is rather well-known.

Liphistiidae are rarely seen tube-dwelling spiders that construct rudimentary trap-doors, characterized by their downward pointing, daggerlike without venom glands [Haupt 2004] , and by having a segmented series of plates on the upper surface of their abdomens. Some make silk trip-lines radiating away from the burrow entrance. They are active at night and live for many years, and females molt after maturity. Adult males wander in search for females, which rarely leave their burrows. The respiratory system consists only of , which could be a reason why these spiders show a quite low level of activity.

Although most species live in burrows, cave-dwelling species fasten their retreats to the side of the cave. Both burrows and retreats are sealed with woven doors. [Murphy & Murphy 2000]

In caves in Malaysia, three different species of "Liphistius" are known, and each species is endemic to just one or two caves [ [http://www.cavesofmalaysia.com/photopage1.htm Caves of Malaysia] ] . The most well known of them is "", which is found in . Other species that can be found in Malaysia include "", "" and "" which can be found in cool-humid places.

Although they are (having downward pointing chelicerae), like the , there is no close relationship between those two. It is thought that the common ancestor of all spiders was orthognath, and that in the , comprising of Mygalomorphae (mostly tarantulas) and (all other spiders), only the Araneomorphae changed their alignment of chelicerae, while the mygalomorphs retained this feature.