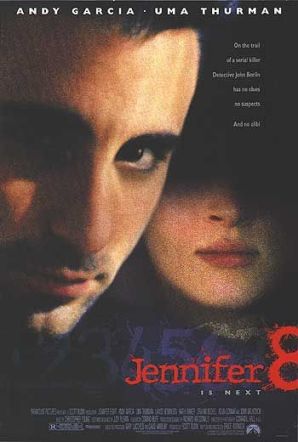 
Jennifer Eight is a 1992 film written and directed by and starring , , and .

John Berlin () is a cop teetering toward burnout on the streets of and the collapse of his marriage. At the invitation of an old friend, fellow cop Freddy Ross (), Berlin bolts from the for a supposedly quieter life in rural with the Eureka police force.

Instead, Berlin prickles his new colleagues, including J. K. Taylor (), who was passed over for promotion in order to make room for Berlin.

Berlin reopens the case of a of blind girls which went unsolved despite a full-time six-month effort by the department. The killer has already claimed seven victims.

Berlin is trying to connect the case to a body found at a dump, but Taylor and police chief Citrine () refuse to believe that the body at the dump is in any way connected to the case.

Berlin becomes convinced that "Jennifer 8" -- or victim 8 -- will be blind student Helena Robertson (), whose roommate Amber was the seventh victim. Berlin becomes obsessed with the case, despite an almost complete lack of hard evidence, and he becomes romantically involved with Helena, who resembles his ex-wife.

Concerned for Berlin's physical and emotional welfare, Ross accompanies Berlin on a stakeout at the institute where Helena lives in a dorm, after leaving Helena at a party with Ross' wife Margie ().

When they see lights in the closed school, Berlin investigates and is knocked unconscious by the killer, who then shoots Ross dead with Berlin's gun.

After a grueling interrogation by agent St. Anne (), Berlin figures out that the killer is Taylor, whose killing spree was prompted by a traumatic childhood spent attending the Daphne Klebe School, an all-girls school for the blind.

When Berlin hears that Margie has taken Helena back to the institute, Berlin knows Helena and Margie are in danger, because Taylor has indeed selected Helena to be his next victim. But Margie has a plan.

Margie masquerades as Helena, and is cornered by Taylor at the dorm. Taylor is shocked when the woman that he thinks is Helena turns around...and he sees Margie's face.

Margie raises a gun, aims it at Taylor, and fatally shoots him, exactly the way he did Ross.