The special wards (特別区, tokubetsu-ku?) are 23 municipalities that together make up the core and the most populous part of Tokyo, Japan. Together, they occupy the land that was the city of Tokyo before it was abolished in 1943. The special wards' structure was established under the Japanese Local Autonomy Law and is unique to Tokyo.

In Japanese, they are commonly known as the "twenty-three wards" (23区, nijūsan-ku?). All wards refer to themselves as cities in English, even though the Japanese designation of tokubetsuku is unchanged.

It is merely a grouping of special wards, there is no associated single government body.

Unlike municipalities (including the municipalities of western Tokyo), special wards are not considered to be local public entities for purposes of the Constitution of Japan. This means that they have no constitutional right to pass their own legislation, or to hold direct elections for mayors and councilors. While these authorities are currently granted by statute, they may be unilaterally revoked by the Diet of Japan; similar measures against other municipalities would require a constitutional amendment.

The word "special" distinguishes them from the wards (区, ku?) of other major Japanese cities. Before 1943, the wards of Tokyo City were no different from the wards of Osaka or Kyoto. These original wards originally numbered 15 in 1889, and over the years came to expand to the current city area, reaching a number of 35 wards. On March 15, 1943, when the Tokyo city government and prefectural government merged into a single prefectural government, the wards were placed under the direct control of the prefecture. 35 wards of the former city were integrated into 22 on March 15, 1947 just before the legal definition of special wards was given by the Local Autonomy Law, enforced on May 3 the same year. The 23rd ward, Nerima, was formed on August 1, 1947 when Itabashi was split again.

Since the 1970s, the special wards of Tokyo have exercised a considerably higher degree of autonomy than the wards in other cities, making them more like independent cities than districts. Each special ward has its own elected mayor (区長, kuchō?) and assembly (区議会, kugikai?). In 2000, the National Diet designated the special wards as local public entities (地方公共団体, chihō kōkyō dantai?), giving them a legal status similar to cities.

The wards vary greatly in area (from 10 to 60 km²) and population (from less than 40,000 to 830,000), and some are expanding as artificial islands are built. Setagaya has the most people, while neighboring Ōta has the largest area. 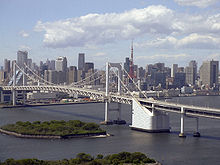 Many important neighborhoods are located in Tokyo's special wards:

Akasaka
A district with a range of restaurants, clubs and hotels; many pedestrian alleys giving it a local neighbourhood feel. Next to Roppongi, Nagatachō, and Aoyama.
Akihabara
A densely arranged shopping district for electronics and otaku goods.
Aoyama
A neighborhood of Tokyo with parks, an enormous cemetery, expensive housing, trendy cafes and international restaurants. Includes the Omotesandō subway station.
Ginza and Yūrakuchō
Major shopping and entertainment district with department stores, upscale shops selling brand-name goods, and movie theaters.
Harajuku
Known for its role in Japanese street/teen fashion.
Ikebukuro
The busiest interchange in north central Tokyo, featuring Sunshine City and various shopping destinations.
Jinbōchō
Tokyo's center of used-book stores and publishing houses, and a popular antique and curio shopping area.
Marunouchi and Ōtemachi
The main financial and business district of Tokyo has many headquarters of banks, trading companies and other major corporations. The area is seeing a major redevelopment with new buildings for shopping and entertainment constructed in front of Tokyo Station's Marunouchi side.
Nagatachō
The political heart of Tokyo and the nation. It is the location of the Diet, government ministries, and party headquarters.
Odaiba
A large, reclaimed, waterfront area that has become one of Tokyo's most popular shopping and entertainment districts.
Omotesandō
Known for upscale shopping.
Roppongi
Home to the rich Roppongi Hills area, an active night club scene, and a relatively large presence of Western tourists and expatriates.
Ryōgoku
The heart of the sumo world. Home to the Ryōgoku Kokugikan and many heya.
Shibuya
A long-time center of shopping, fashion, nightlife and youth culture.
Shinagawa
In addition to the major hotels on the west side of Shinagawa Station, the former sleepy east side of the station has been redeveloped as a major center for business.
Shinbashi
An area revitalized by being the gateway to Odaiba and the Shiodome Shiosite complex of high-rise buildings.
Shinjuku
Location of the Tokyo Metropolitan Government Building. The area is best known for Tokyo's early skyscrapers, erected in the 1970s. Major department stores, electronics stores and hotels can also be found here. On the east side of Shinjuku Station, Kabukichō is known for its many bars and nightclubs. Shinjuku Station moves an estimated three million passengers a day, making it the busiest in the world.
Ueno
Ueno Station serves commuters to and from areas north of Tokyo. Besides department stores and shops in Ameyoko, Ueno boasts Ueno Park, Ueno Zoo and major national museums. In spring, Ueno Park and adjacent Shinobazu Pond are popular places to view cherry blossoms.