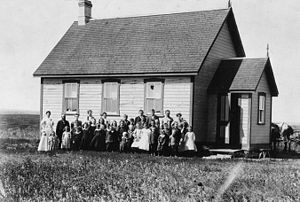 The Manitoba Schools Question was a political crisis in the Canadian Province of Manitoba that occurred late in the 19th century, involving publicly funded separate schools for Roman Catholics and Protestants. The crisis eventually spread to the national level, becoming one of the key issues in the federal election of 1896 and resulted in the defeat of the Conservative government, which had been in power for most of the previous thirty years. Because of the close linkage at that time between religion and language, the Schools Question raised the deeper question whether French would survive as a language or a culture in Western Canada.

The end result of the crisis was that by the end of the 19th century, French was no longer supported as an official language in Manitoba or the neighbouring North-West Territories, which in turn led to a strengthening of French Canadian nationalism in Quebec.

Manitoba became the first western province to join Confederation in 1870. The province was created through negotiations between Canada and the provisional Red River government of Louis Riel, following the Red River Resistance. One of the key issues in the negotiations was the question of control of education in the new province. There was considerable pressure for a system of denominational schools in the new province, for both Protestants and Roman Catholics. Although framed as a religious issue, there was also a question of language politics involved, since at that time, most Protestants in Manitoba were anglophones and most Roman Catholics were francophones. Religious control over education thus also related to the language of education.

The Act of Parliament which created the province, the Manitoba Act, responded to these concerns by giving the province the power to pass laws relating to education, but also by giving constitutional protection to denominational school rights which existed "...by Law or practice in the Province at the Union."[1] The exact meaning of this provision, and the scope of the constitutional protection it provided, subsequently became a matter of considerable political and legal debate.

Soon before the Manitoba Act was passed to create the province, settlers from English Canada, mainly Ontario, began to arrive in greater numbers than they had come prior to the Red River Rebellion (which was, in part, a reaction against them.)[citation needed]

The Manitoba Act had given equal rights to Protestant schools, and Roman Catholic schools, but by the 1880s this no longer reflected the linguistic makeup of the province. Many Métis had left[citation needed], and settlers from Quebec were not as numerous as those from Ontario. As the Canadian Pacific Railway was completed in the 1870s and 1880s, many more English speaking settlers had begun to arrive.

One of the most vocal opponents of separate French and English schools was D'Alton McCarthy, who formed the Equal Rights Association in 1889. By "equal rights", McCarthy meant fairer representation in the province, instead of privileges for the diminishing French population.[citation needed]. McCarthy was supported by Joseph Martin, Attorney General of Manitoba[citation needed].

Following the establishment of the Province, the new provincial government established a system of denominational schools funded by provincial taxes. However, in 1890, the Manitoba government of Premier Thomas Greenway passed the Public Schools Act,[2] removing funding for Catholic and Protestant denominational schools and establishing a system of tax-supported, non-sectarian public schools.

The question was whether this legislation was consistent with s. 22(1) of the Manitoba Act. Two rounds of litigation were the result, in each case going to the Judicial Committee of the Privy Council, at that time the highest court in the British Empire. The legislation also triggered considerable national political debate.

Abolition of French as an Official Language

The Manitoba Act, 1870 had also provided that both English and French would have official language status in the Province of Manitoba.[3] However, in 1890, at the same time as the enactment of the Public Schools Act, the Manitoba Legislature passed another Act which made English the only official language in the Province.[4] Although this Act did not directly relate to the education issue, it provided further controversy on the language issue.

Although the abolition of French as an official language did not directly affect the Schools Question, it strengthened the controversy, given the ties between religious schools and the language of education.

The first court case focussed on whether the Public Schools Act conflicted with the constitutional protection for denominational schools set out in s. 22 of the Manitoba Act, 1870. Catholics in Manitoba, encouraged by Prime Minister John A. Macdonald,[citation needed] challenged the constitutionality of the 1890 Act in the Queen's Bench of Manitoba, arguing that the requirement to pay taxes to the new public school interfered with their rights under s. 22.

Although education is normally a matter of exclusive provincial jurisdiction under the Constitution of Canada, there is a special power for the federal government in relation to separate schools. Section 93(3) of the Constitution Act, 1867 provides that there is an appeal to the Governor General in Council "...from any Act or Decision of any Provincial Authority affecting any Right or Privilege of the Protestant or Roman Catholic Minority of the Queen's Subjects in relation to Education." Section 93(4) provides that if a province does not comply with a decision of the Governor-in-Council in an appeal under s. 93(3), then Parliament has the power to enact "... remedial Laws for the due Execution of the Provisions of this Section and of any Decision of the Governor General in Council under this Section."[9] Section 22 of the Manitoba Act had similar provisions authorising an appeal to the Governor General in Council and remedial legislation by Parliament.[10]

Following the Privy Council decision in Barrett, pressure arose for the federal government to take action under these provisions. However, it was not clear if the changes to the Manitoba school system set out by the 1890 Act were sufficient to authorise the federal government to hear an appeal and to enact remedial legislation, in light of the Privy Council's conclusion that the system of taxpayer funded denominational schools which were established in the early 1870's was not constitutionally protected.

To resolve this uncertainty, the federal government referred the matter to the Supreme Court of Canada as a reference question, asking if these constitutional provisions applied. The Supreme Court held that those provisions did not apply, since the post-1870 denominational schools were not constitutionally protected. This decision was appealed to the Privy Council, which overturned the Supreme Court. The Privy Council held that when the Province had created a system of taxpayer funded denominational schools in the early 1870's, it had given a "right or privilege" to the Protestants and Roman Catholics in relation to education. Although that "right or privilege" was not constitutionally entrenched by s. 22(1) of the Manitoba Act, the abolition of the denominational schools could be appealed to the federal government under s. 22(2) of the Manitoba Act, and Parliament could enact remedial legislation under s. 22(3).[11]

The "Schools Question", as it was known, had divided the Conservative government since 1890,[citation needed] and especially after Macdonald's death in 1891 when no strong leader replaced him. However, so long as education remained an exclusively provincial jurisdiction, the federal government had limited powers to intervene. In light of the Privy Council decision in Brophy v. Manitoba, the political situation changed. The federal government now had the authority to act; the question was whether it would.

In 1896, the federal government of Prime Minister Mackenzie Bowell introduced remedial legislation under s. 22(3) of the Manitoba Act, 1870 in the House of Commons. However, the draft legislation was very unpopular with some members of the Conservative caucus, and its introduction triggered a political crisis. Faced with a caucus revolt, Prime Minister Bowell was forced to call an election and to resign in April of that year. Following the election call, with the remedial bill not passed by Parliament, Charles Tupper became Prime Minister and led the Conservatives in the election.

The election of 1896 was centred on the Schools Question. It especially divided Conservatives in Quebec and Ontario; French catholic Quebecers were offended that French was being eliminated in Manitoba as an official language,[citation needed] just as the French-speaking Métis population had been forced off their lands,[citation needed] while Ontario saw opposition to Catholic support by the strong Orange Order.[citation needed] The Liberals, under Wilfrid Laurier (a French Catholic), took advantage of the division in the Conservative party. Laurier won the election and became Prime Minister.

Laurier developed a compromise with Thomas Greenway, Premier of Manitoba. They agreed that Catholic education would be permitted in public schools,[citation needed] and French would be used in teaching, but only on a school-by-school basis requiring there to be a minimum of 10 French speaking pupils[citation needed]. They also re-established a Catholic school board, but without government funding. Many Catholics were still opposed to this compromise,[citation needed] and even appealed to Pope Leo XIII. The Pope sent an observer, who concluded, like Laurier, that the compromise was the fairest one possible with so few Catholics left in the province.

Consequences of the Controversy

As French was no longer an official language, its use declined greatly.[citation needed] By 1916, the guarantee of French instruction was removed from the compromise, leaving English as the only official language in use in the province.

The Schools Question, along with the execution of Louis Riel in 1885, was one of the incidents that led to strengthening of French Canadian nationalism in Quebec in the late 19th century.