The Duke Is Tops

The Duke Is Tops 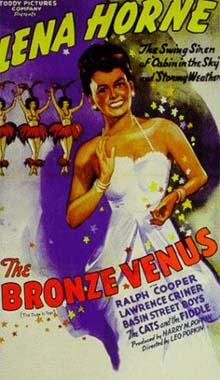 Also entitled "The Bronze Venus", film was one of a number of low-budgeted musicals (or "s") made in the 1930s and 1940s for the market. The casts and production teams of these films were almost all black, and the music reflected current tastes in and .

"The Duke is Tops" features the film debut of singer , who was only 21 at the time and had yet to develop the smooth, classy style she would distinguish herself with in her later films for . Notably, Horne has a major acting role in this film, something that save for 1943's "" and a few later films, she would rarely enjoy.

Duke Davis, is a stage show promoter in love with Ethel Andrews, a popular singer in his company dubbed "the Bronze Venus". Duke finds out that big-time promoters from want to propel Ethel into the big leagues, but Ethel, out of loyalty and love for Duke, refuses to leave his small-time show. Duke, in a selfless act, orchestrates a deception to force Ethel to leave his show in order to better her career.

However, the loss of the Bronze Venus causes Duke's own career to collapse and he soon finds himself working on a travelling where he goes from town-to-town, introducing a series of specialty musical acts and helping to sell Doc Dorando's all-purpose elixir. But when he hears that Ethel's New York gig is a flop, Duke goes to New York where he is reunited with her. Soon after, Duke combines his stage show, the medicine show and Ethel's singing into a top nightclub act.

* as Duke Davis
* as Ethel Andrews
* as Doc Dorando

* During one of her musical numbers, Lena Horne sings about "stormy weather". Another song also about "Stormy Weather" would later become one of her trademarks, and in 1943 she would star in a film entitled "Stormy Weather".
* Ralph Cooper, the film's star, also served as the movie's production manager.

"The Duke is Tops" has been released on DVD in North America. The film is in the in America, and as such is available in multiple editions. [http://www.profilms.com/publicdomain/index.htm]