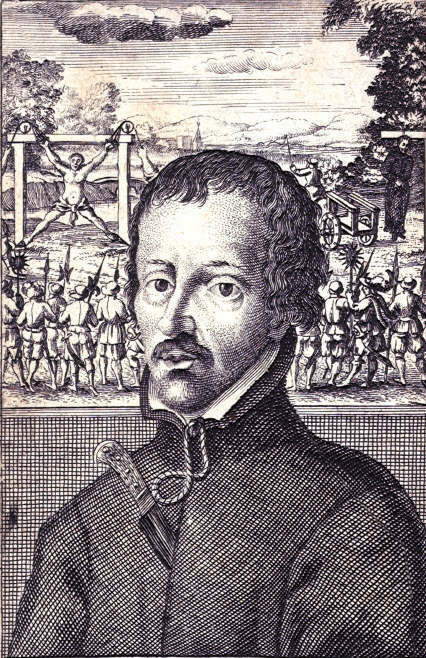 imagesize=200px
caption=Portrait of St. Edmund Campion
birth_place=
death_place=Tyburn
titles=
beatified_date=
beatified_place=
beatified_by=
canonized_date=
canonized_place=
canonized_by=
attributes=
patronage=
major_shrine=
suppressed_date=
issues=
prayer=And touching our Society, be it known to you that we have made a league - all the Jesuits in the world - cheerfully to carry the cross you shall lay upon us, and never to despair your recovery, while we have a man left to enjoy your Tyburn, or to be racked with your torments or consumed with your prisons. The expense is reckoned, the enterprise is begun; it is of God, it cannot be withstood. So the faith was planted; so it must be restored.
prayer_attrib=-Edmund Campion, from Campion's Brag

Born in on , Campion received his early education at , and, as the best of the London scholars, was chosen in their name to make the complimentary speech when Queen Mary visited the city. He then attended , becoming a fellow in 1557 and taking the on the occasion of his degree in 1564. When Sir Thomas White, the founder of the college, was buried in 1567, the oration fell to the lot of Campion.

Two years later he welcomed Queen Elizabeth to the university, and won her lasting regard. He was chosen amongst the scholars to lead a public debate in front of the queen. By the time the Queen had left Oxford, Campion had earned the patronage of the powerful and also the Earl of Leicester, tipped by some to be future husband of the young Queen. People were now talking of Campion in terms of being a future , in the newly established .

Religious difficulties now arose; but at the persuasion of Richard Cheyney, , although holding Catholic doctrines, he received deacon's orders in the Anglican Church. Inwardly "he took a remorse of conscience and detestation of mind." Rumours of his opinions began to spread and he left Oxford in 1569 and went to to take part in a proposed establishment of the .

Campion was appointed tutor to , son of the Speaker of the Irish parliament, and attended the first session of the House of Commons, which included the prorogation. Campion was transferred by Stanihurst's arrangement to the house of Patrick Barnewall at Turvey in , which he acknowledged saved him from arrest and torture by the Protestant party in Dublin. For some three months he eluded his pursuers, going by the name Mr. Patrick and occupying himself by writing a history of Ireland.

In 1571, Campion left Ireland in secret and escaped to in the Low Countries (now France) where he was reconciled to the Catholic Church and received the that he had denied himself for the last 12 years. He entered the English College founded by William Allen, another religious refugee. The College's intake grew dramatically and a little after Campion's arrival a papal subsidy was granted.

The object of the college was primarily to supply priests for the Catholic population in England, as all of the bishops were now either dead, exiled or under detention and thus impeded from ordaining new priests. The Queen's principal secretary, Sir , expected that in a few years time the 'Marian Priests', ordained during the reign of Queen Mary I would begin to die out.

It was also a centre of intellectual excellence. Here the famous was produced, in advance of the King James Version. Campion found himself reunited with many of his old friends. He was to teach rhetoric while there and finish studying for the degree of , granted him by the on .

However was more than just a seminary, and became a rallying point for exiled English Catholics. Important political visitors were reported to come to see Cardinal Allen under cover of darkness. As a result, the Crown reputedly sent spies to the institution, some of whom feigned conversion to Catholicism, and even became priests. Fact|date=April 2008

Having obtained his degree, Campion decided to answer a growing call within him and left for , travelling on foot and alone in the guise of a poor pilgrim. In that same year he entered a novitiate with the , and spent some years in and .

In 1580, the Jesuit mission to England began. Campion accompanied who, as superior, was intended to counterbalance his own fervour and impetuousness. He had been reluctant to follow the father general's order to take part in the mission, the members of which were instructed to avoid the company of boys and women, and to avoid giving the impression of being legacy hunters. Before embarking, the members of the mission were embarrassed to receive news of a landing by papal sponsored forces in the Irish province of in support of the Irish rebel . They also learned that a letter detailing their party and mission had been intercepted and that they were expected in England.

Campion finally entered England in the guise of a jewel merchant. He arrived in London on , and at once began to preach. His presence became known to the authorities, and the diffusion of the challenge he threw down in the form of a declaration, known as the "Challenge to the Privy Council" to his allies and as "Campion's Brag" to his enemies, made his position more difficult. He led a hunted life, preaching and ministering to Catholics in , , , and .

During this time he was writing his "Decem Rationes" ("Ten Reasons"), a rhetorical display of reasons against the . The book was printed in a clandestine press at , Henley, and 400 copies were found on the benches of St Mary's, , at the Commencement, on , . It caused great sensation, and the hunt for Campion was stepped up. On his way to , he stopped at Lyford, then in , where he preached on and the following day, by popular request. Here, he was captured by a spy and taken to London with his arms pinioned and bearing on his hat a paper with the inscription, "Campion, the Seditious Jesuit".

Committed to the , he was questioned in the presence of Elizabeth, who asked him if he acknowledged her to be the true Queen of England. He replied in the affirmative, and she offered him wealth and dignities, but on condition of rejecting his Catholic faith, which he refused to accept. He was kept a long time in prison, twice racked (by order of the Council but certainly with Elizabeth's consent), and every effort was made to shake his defiance. Despite the effect of a false rumour of retraction and a forged confession, his adversaries summoned him to four public conferences (September 1 18, 23 and 27 1581). Although still suffering from his ill treatment, and allowed neither time nor books for preparation, he reportedly conducted himself so easily and readily that he won the admiration of most of the audience. Tortured again on , he was indicted at on a charge of having conspired, along with others, in Rome and to raise a sedition in the realm and dethrone the Queen.

Campion was sentenced to death as a traitor. He answered "In condemning us, you condemn all your own ancestors, all our ancient bishops and kings, all that was once the glory of England -- the island of saints, and the most devoted child of the See of Peter". He received the death sentence with the "". After spending his last days in prayer he was led with two companions to Tyburn and on , aged 41.

The ropes used in his execution are now kept in glass display tubes at in ; each year they are placed on the altar of St Peter's Church for mass to celebrate Campion's feast day. [T.E. Muir, "Stonyhurst College"]