Intense pulsed light (IPL), is a technology aimed at producing light of high intensity during a very short period of time. It involves specific lamps together with capacitors whose rapid discharge provides the high energy required.

It is a method of hair removal from the body most commonly employed by medical practitioners and estheticians. It involves the use of a specially constructed xenon flash lamp and focusing optics.

IPL hair removal is cheaper and faster than laser hair removal. Although the precise effectiveness of IPL compared to laser epilation is debated by scientists, equipment manufacturers and practitioners, their results are generally accepted to be roughly equivalent. IPL can also be used as a skin treatment in a process known as photorejuvenation.

The focused, broad-spectrum light is applied to the surface of the skin by way of either a hand-held wand or an articulated arm. This light travels through the skin until it strikes the hair shafts or the bulb (root) of the hair. The bulb is usually where the highest concentration of melanin is located, as opposed to the rest of the hair shaft. As the light is converted to heat energy, the bulb and most of the hair shaft are instantly vaporized.[1]

The intense heat radiated by the hair also destroys the hair-producing papilla or the entire hair follicle. It is also claimed that direct light-heat conversion occurs directly in the darker colored capillaries that bring nourishing blood vessels to the follicle. Contrary to what is often announced, Photoepilation is not a permanent hair removal method but a permanent hair reduction method. This means that although IPL treatments with these devices will permanently reduce the total number of body hairs, they will not result in a permanent removal of all hair.[2] 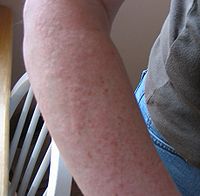 An arm four hours after IPL treatment. The raised bumps and red colouration around each hair follicle is Perifolliculitis and is typical of this treatment. This normally subsides after three or four days.

IPL technology is also employed in the treatment of medical disorders of the skin including:

In terms of rosacea, IPL offers one of the few effective treatments to relieve the facial redness associated with the disorder. Such treatment may be administered by a dermatologist or other medical specialist with experience treating skin disorders. This new technology incorporates 'dual mode filtering' and other important advances which result in safer and more effective treatment than older systems designed for hair removal.

The pulses of light produced by IPL equipment are very short in duration, so discomfort and damage to non-target tissues is minor. Most people who undergo IPL epilation only experience slight irritation similar to that of a minor sunburn though under certain circumstances, blisters may occur. Men undergoing the procedure experience greater discomfort as male body hair is generally thicker than women's.

Depending on the instrument settings and intensity, treating sensitive areas such as the chest and face can result in pain comparable to waxing the same areas; however this pain dissipates immediately. The light that emanates from the IPL wand is filtered to remove any ultraviolet components, eliminating the possibility of UV skin damage.

IPL's (Intense Pulsed Light) work more directly on the top layers of the skin and do not penetrate deep enough to damage hair germ cells, without potential damage to the epidermis.