Charles Darwin University (CDU) is an Australian public university with about 20,000 students in 2007.

The University offers a wide range of Higher Education degrees and Vocational Education and Training courses with flexible study options, including part-time, external and online.

CDU has campuses in the Darwin suburb of Casuarina, the city of Palmerston, and the towns of Alice Springs, Katherine and Nhulunbuy, with smaller training centres in Jabiru, Tennant Creek and Yulara.

Charles Darwin University was created on 1 January 2004 from the amalgamation of Northern Territory University (NTU) of Darwin and Centralian College of Alice Springs. The University is named after Charles Darwin, the celebrated English naturalist.

Charles Darwin University has evolved over the years through the merging of several higher education institutions.

Darwin Community College, founded in 1974 and renamed Darwin Institute of Technology in 1984, was a combined College of Advanced Education and a TAFE College. It was situated on what is now the Casuarina Campus, although it used other buildings at various times in Darwin. By the time of the formation of the Northern Territory University, it gave degrees in Arts, Education, Business and Applied Science.[1]

University College of the Northern Territory

On several occasions the Government of the Northern Territory requested the Australian Commonwealth Government to finance a university in the Territory. The response was always that the population was too small. In 1985, it took the unusual step of financing the University College of the Northern Territory itself for a five year period from 1987 to 1991. The college was governed by a Council, chaired by Austin Asche and led by a Warden, Professor Jim Thomson, from the University of Queensland. An arrangement was made with the University of Queensland that the College would awards degrees from that institution. Staff were recruited in 1986 and housed in the old Darwin Primary School buildings. Just prior to taking the first students in February 1987, the College moved to converted building of the former Darwin Hospital at Myilly Point in Darwin. The former Nurses' Hostel became a student residence, named International House. The College had two Faculties, of Arts and Science. It awarded, through the University of Queensland link, the first Doctor of Philosophy degrees in the Northern Territory.

Centralian College was founded in 1993 from the merger of Sadadeen Senior Secondary College and the Alice Springs College of TAFE.

During its life, the college delivered senior secondary, TAFE and Higher Education through its main campus in Alice Springs, and to a lesser extent the whole Northern Territory.[2]

Centralian College is a co-educational senior secondary school, for students from Year 10 to Year 12.

The Northern Territory University (NTU) was founded in January 1989 by merger of the Darwin Institute of Technology, and the University College of the Northern Territory. The merger was controversial, but forced by the so-called Dawkins Revolution under Federal Minister of Education John Dawkins. The new university started life on 1 January 1989. Degrees of the University of Queensland continued to be awarded for a few years.

The first Vice-Chancellor was Professor Malcolm Nairn from Murdoch University in Western Australia. Under his leadership the university prospered and morale was high among both staff and students. However funding declined as student numbers rose. During his term of office the various study centres around the Territory, that previously had been run directly by the NT Government, became part of the University. The Palmerston campus, for a few years previously a TAFE College, also became part of the university. The Palmerston campus is situated on University Avenue as this was the proposed site for a new university in a submission to the Federal Government in 1981.

The second Vice-Chancellor was Professor Roger Holmes from Griffith University. After an initial excellent start to his period of office, he disappointed the university and local community by resigning after serving for only one semester to take up the post of Vice-Chancellor at University of Newcastle.

He was replaced as third Vice-Chancellor by the then Deputy Vice-Chancellor, Professor Ron McKay. Under his leadership, the financial constraints on the university increased. The environment of having to provide as wide as possible a tertiary education to a small population living in a very large area far from alternative institutions became even more hostile and the university did not prosper. In January 2001, the Katherine Rural College, including Mataranka Station, became part of the university.

After Ron McKay's resignation due to ill health in 2002, an interim Vice-Chancellor, Professor Ken McKinnon, former Vice-Chancellor of the University of Wollongong was appointed. He took various actions to improve the health of the university, some controversial, such as the proposal to merge with Centralian College with a new name for the university. 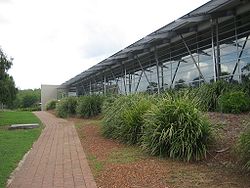 Charles Darwin University is a dual-sector university, which means the university offers Vocational Education and Training (VET) courses and Higher Education undergraduate and postgraduate degrees, covering a wide range of subjects and disciplines.

Enrolments in 2007 totalled 20,098 students, with 14,151 students enrolled in Vocational and Educational Training courses and 5947 enrolled in Higher Education degrees.[4]

There are three areas of study offered by the university's three faculties:

The University has close links with Flinders University in South Australia, which itself has many students from the Northern Territory, including joint management of the Centre for Remote Health in Alice Springs and several education initiatives.[8]

The Vice Chancellor of the University is Professor Barney Glover.

104.1 Territory FM is a community radio station based on the campus of Charles Darwin University. The station is broadcast on 104.1 Darwin and Palmerston and 98.7 Alice Springs and can also be heard across the Northern Territory in Batchelor, Katherine / Tindal[disambiguation needed