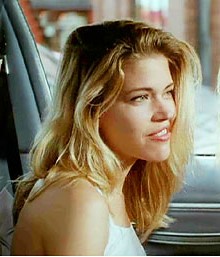 Renee Griffin is married to actor James Marshall, who is the father of one of her sons (James David, b. 2002). She has a son, Dustin, from a previous relationship.

She was a regular cast member on the now-defunct ABC soap "", playing the part of Danielle Ashley from 1997-1998. In 2001 she appeared on the TV series "Black Scorpion" as the villain Aerobicide.

Her first known nude film appearance was in "", where she played the role of a drug-addicted entertainer who gets beheaded after crossing boss Funekei Yoshida, played by .

The scene features an already drugged Angel being questioned about her loyalty by Yoshida. Angel offers her body in an attempt to appease Yoshida, who drugs her more and then strips her of all clothes save the garter belt. She is fondled from behind, from the breasts to the crotch, before being beheaded.

She studied drama at , where she appeared on stage in such plays as "Crime of the Heart", "Philadelphia Story", and "The Star-Spangled Girl". Before that she attended Kennedy High School in Long Beach.