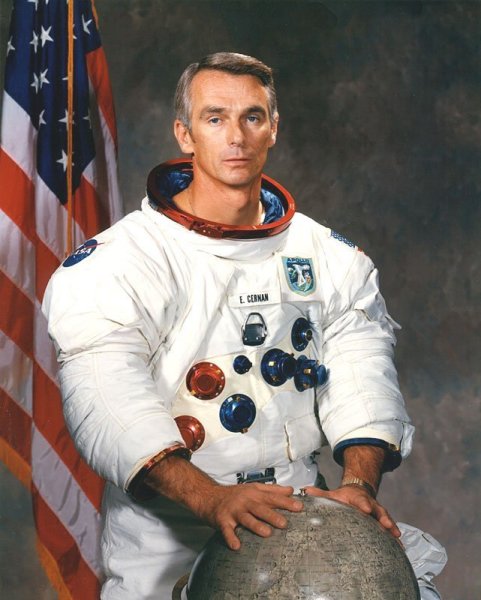 Eugene Andrew Cernan (born , ) is a retired officer and a former of ancestry. He has been into space three times: as co-pilot of in June 1966; as lunar module pilot of in May 1969; and as commander of in December 1972. In that final lunar landing mission, Cernan became "the last man on the moon" since he was the last to re-enter the during its third and final (EVA). He was also a backup crew member for the , and missions.

A native of , son of a Czech mother and a Slovak father, he received his father's name, originally spelled Ondrej Čerňan (read Ondrey Chernyan, IPA2|ˈondrɛj ˈtʃɛrɲan). Cernan grew up in the towns of Bellwood and Maywood. He graduated from in Maywood, Illinois and , where he became a member of , in 1956, with a B.S. in . He was commissioned into the through the Naval Reserve Officers Training Corps at Purdue, and became a Naval Aviator flying jets. He also holds a M.S. in from the . In 1976, Cernan retired both from the Navy (as a ) and from NASA, and went into private business.

Cernan was selected among the third group of NASA astronauts in October 1963 by the (NASA) to participate in Projects Gemini and Apollo.

Cernan was originally selected as back-up pilot for Gemini IX with Thomas Stafford but when the prime-crew was killed in a plane crash they became the prime crew. Gemini 9A encountered a number of problems; the original target vehicle exploded and the planned docking was made impossible by a protective shroud failing to eject. Cernan performed the second American EVA (only the third ever)but his space suit overheated resulting in a very high heart rate. The crew performed a demonstration of an early rendezvous that would be used in : the first optical rendezvous; and a lunar orbit abort rendezvous.

.While on the moon during , he and his crewmate performed three EVAs for a total of about 22 hours of exploration. Their first EVA alone was over three times the length and spent outside the LM on . During this time they covered over 35 kilometers using the and spent a great deal of time collecting geologic samples that would shed light on the moon's early history.

As Cernan got ready to climb the ladder he spoke these words, the last currently spoken by a human standing on the moon's surface: "As we leave the Moon at Taurus-Littrow, we leave as we came, and God willing, as we shall return, with peace and hope for all mankind. As I take these last steps from the surface for some time to come, I'd just like to record that America's challenge of today has forged man's destiny of tomorrow. Godspeed the crew of Apollo Seventeen." [http://www.hq.nasa.gov/office/pao/History/alsj/a17/a17.clsout3.html]

He is the author of "The Last Man on the Moon," his memoirs of his career both with NASA and before.

In the 1998 miniseries "From the Earth to the Moon", Cernan was played by .