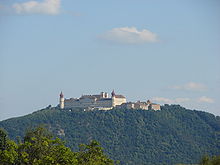 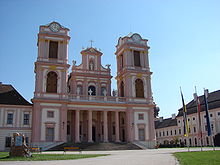 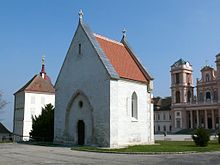 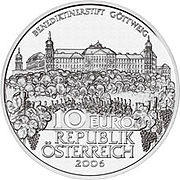 Göttweig Abbey (Stift Göttweig) is a Benedictine monastery near Krems in Lower Austria.

Göttweig Abbey was founded as a monastery of canons regular by Blessed Altmann, Bishop of Passau. The high altar of the church was dedicated in 1072, but the monastery itself not until 1083: the foundation charter, dated 9 September 1083, is still preserved in the abbey archives.

By 1094 the discipline of the community had become so lax that Bishop Ulrich of Passau, with the permission of Pope Urban II, introduced the Rule of St. Benedict. Prior Hartmann of St. Blaise's Abbey in the Black Forest was elected abbot. He brought with him from St. Blaise's a number of chosen monks, among whom were Blessed Wirnto and Blessed Berthold, later abbots of Formbach and Garsten respectively. Under Hartmann (1094–1114) Göttweig became a famous seat of learning and strict monastic observance. He founded a monastic school, organized a library, and at the foot of the hill built a nunnery where it is believed that Ava, the earliest German language poetess known by name (d. 1127), lived as an anchorite. The nunnery, which was afterwards transferred to the top of the hill, continued to exist until 1557.

During the 15th and 16th centuries however the abbey declined so rapidly that between 1556 and 1564 it had no abbot at all, and in 1564 not a single monk was left here. At this crisis an imperial deputation arrived at Göttweig, and elected Michael Herrlich, a monk of Melk Abbey, as abbot. The new abbot, who held his office until 1604, restored the monastery spiritually and financially, and rebuilt it after it had been almost entirely destroyed by fire in 1580.

Abbots distinguished during the Reformation were George Falb (1612–1631) and David Corner (1631–1648), who successfully opposed the spread of Protestantism in the district.

In 1718 the monastery burnt down and was rebuilt on a grander scale during the abbacy of Gottfried Bessel (1714-1749) to designs by Johann Lucas von Hildebrandt inspired by the Escorial, a scheme so lavish that Abbot Gottfried was nearly deposed because of it. The fresco decorating the imperial staircase is considered as a master piece of Baroque architecture in Austria. Executed by Paul Troger in 1739, it represents the Holy Roman Emperor Charles VI as Apollo.

The abbey has a library of 130,000 books and manuscripts, and a particularly important collection of religious engravings, besides valuable collections of coins, antiquities, musical manuscripts and natural history, all of which survived the dangers of World War II and its immediate aftermath almost without loss.

Since 1625 the abbey has been a member of the Austrian Congregation, now within the Benedictine Confederation.

Göttweig Abbey was recently selected as the main motif of a very high value collectors' coin: the Austrian Göttweig Abbey commemorative coin, minted on October 11, 2006. The obverse side shows the abbey with its fortress-like towers on top of the hill surrounded by trees and vineyards.